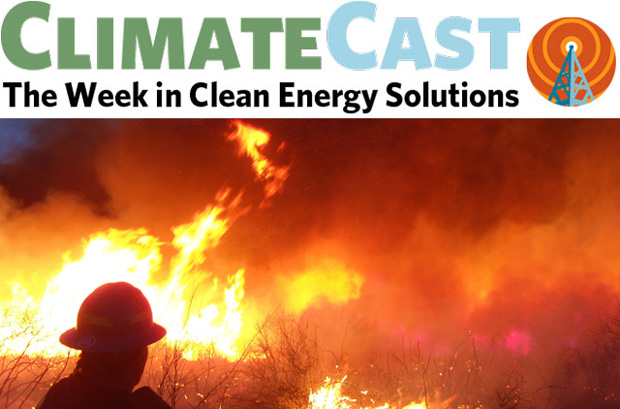 The opportunities to enjoy the benefits of solar power expanded last week when the Obama administration announced a plan to install 300 MW of solar on public housing and plow $520 million of public and private funds into community solar projects, which would be shared by nearby residents or businesses. Analysts estimate that half of Americans cannot install solar on their own roofs because they either rent, live in multi-unit buildings, or lack a suitable site. Market research firm GTM predicts a near-tripling of community solar installations in the US this year, and the Tucson, AZ, utility is proposing to develop community solar arrays and sell the power to its customers.

More than a quarter-trillion dollars in planned liquefied natural gas projects will be unnecessary if the world is to keep global warming below 2 degrees Celsius, according to a new analysis by the Carbon Tracker Initiative. The high cost of LNG projects makes those the projects more likely to be economically stranded than conventional gas. Meanwhile, peer-reviewed research sponsored by the Environmental Defense Fund demonstrates that natural gas operations release 50 percent more methane—a potent greenhouse gas—than previously reported. By tracking levels of ethane, emitted by drilled gas but not landfills, the studies were able to pin over 70 percent of the methane on fossil fuels.

Top oil companies accepted the realities of climate science in their internal deliberations decades ago, even while outwardly denying the link between carbon pollution and global warming, according to a dossier released last week by the Union of Concerned Scientists. Their refusal to concede that the use of their product endangers the public reminds Sen. Sheldon Whitehouse (D-RI) of the tobacco executives of yesteryear who denied the relationship between smoking and lung disease. Although most Republicans toe that line, one GOP senator’s embrace of clean energy as a way to solve the climate challenge has earned her hefty contributions from a North Carolina entrepreneur.

Twenty-two regional governments in the Americas called for GHG emission targets, carbon pricing, and national action on climate, while mayors of over 250 cities demanded that climate education be taught in national high schools in an effort to counter climate-change denialism. Low-carbon cities represent a $17 trillion economic opportunity, according to a Global Commission on the Economy and Climate report that offers 10 climate-smart measures—led by energy efficiency—that would boost local economies and achieve 96 percent of the GHG emission reductions needed by 2030 to keep the Earth from warming beyond 2 degrees Celsius.

Shell’s pursuit of the white whale of Arctic oil hit a literal snag last week, when the icebreaker Fennica suffered a three-foot gash in its hull while leaving Dutch Harbor, AK. The incident—which may have been caused by a shortcut on the shallow side of Hog Island—sent the icebreaker to Portland for repairs, but Shell insists it will steam ahead in its hunt for crude beneath the Chukchi Sea. A federal decision late last month will hold Shell to drilling just one well at a time in its multi-billion-dollar exploration effort, which even The Wall Street Journal said is marked by “huge risks.”

Coping with a world of fire and less ice

As skies from Washington to Minnesota darkened last week under smoke from wildfires in British Columbia, Alberta, and Saskatchewan, observers of the Alaskan interior warned that the 3 million acres scorched there this year have lost their insulating duff layer, promoting the melting of underground permafrost, which in turn will release climate-warming CO2. The warming Earth has constricted the range of bumblebees, suggests a new paper in Science, and may lead to sea levels comparable to those 3 million years ago, when they were 20 feet higher than today. Climatologists closest to these difficult tidings have a variety of coping mechanisms, according to research published in Esquire.

Electric planes notched another milestone last week, when a two-seater flew across the English Channel on battery power for the first time. The 31-mile crossing followed the route first traversed in 1909 by a gasoline-powered aircraft. A competing plane made the crossing 12 hours earlier, although it required a tow to get airborne. While the Solar Impulse II was grounded in Hawaii last week for repairs to its over-heated batteries following a five-day flight from Japan, BMW rolled out a fully electric 18-wheel truck, which it will put to work hauling auto parts across Munich in short-haul trips that stay well within its 62-mile range.