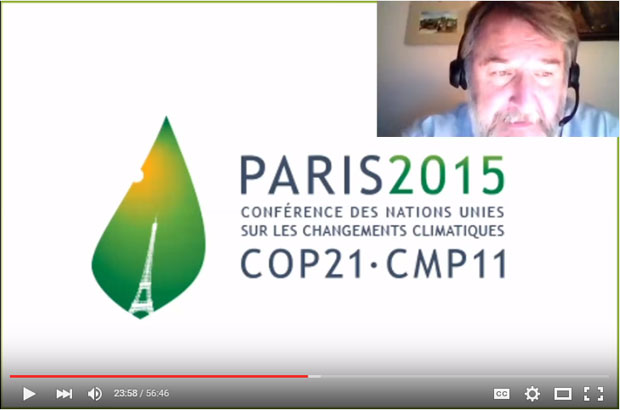 Dispatches from Paris: where are we after COP21?
Climate Solutions
December 14, 2015

As the COP21 climate talks in Paris were entering their final days, Climate Solutions hosted a telebriefing from several Northwest climate action leaders who had travelled to Paris to take part in the huge variety of events, conversations and demonstrations surrounding the official talks. Our policy advisor KC Golden provided some real-time analysis about the negotiations as they were still underway--analysis which remains very useful after the fact. KC discusses the for making sense of the final Paris Agreement and the work that remains ahead for the climate justice movement, and for local, state and national governments.

The final stage of negotiations focused in part on key issues brought to the table by those who stand most directly in the path of global warming threats: less-wealthy and low-lying nations, indigenous people, and communities stressed by immigration or economic hardship. These issues included the more-aggressive temperature-rise limit of 1.5 degrees Celsius; the debate around industrialized nations' financial obligations to smaller countries harmed by climate change. and language protecting working people and women from harm as global economies wean themselves from fossil fuel dependency.

Joining KC to speak on these issues were Jeff Johnson, president of the Washington State Labor Council, clean tech business leader Tim Miller, from Portland-based Enhabit, and Michael Armstrong, Senior Sustainability Manager at the City of Portland’s Bureau of Planning and Sustainability.