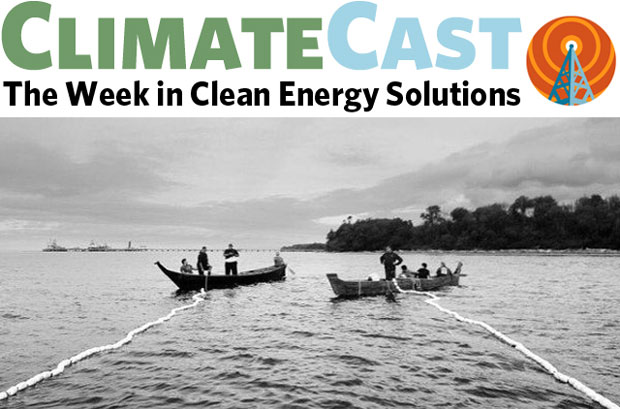 Yet another fossil fuel project crumbled Monday when the US Army Corps of Engineers rejected the proposed $700 million Gateway Pacific coal terminal near Bellingham, WA, ruling it would impact the Lummi Nation’s treaty-protected fishing rights. Since President Obama’s Keystone XL pipeline rejection, at least 20 proposed fossil fuel projects have been canceled. While Interior Secretary Sally Jewell calls environmental groups “naïve” to demand a halt to new federal leases for coal, oil, and gas extraction, a Stockholm Environment Institute study finds phasing out public land fossil fuel leases to be one of the most significant new policies the US could adopt to meet international climate goals.

Solar energy is gaining steam from falling costs, time-of-use utility rates that make midday generation more valuable, and the advent of community solar arrays, says a new industry report released weeks after the US surpassed 1 million solar installations. Financial and engineering costs may come down further, thanks to the Department of Energy’s ”Orange Button” initiative to standardize solar planning. The technology spreads “contagiously” among neighbors, according to data from US mega-installer SolarCity showing that in some cities, 30 to 70 percent of their installations stem from customer referrals. In Santa Monica and San Francisco, home-builders will install solar panels for a different reason: building codes now require them.

Weather conditions in Alberta’s oil-sands region eased over the weekend, slowing the spread of a fire that consumed 400,000 acres and forced 88,000 residents from their homes. Some captured their fiery evacuations in a personal essay or on video, and a firefighter later documented the desolate aftermath. The inferno forced tar-sands extraction to shut down, cutting Canada’s oil output by one-fourth and buoying crude oil prices slightly, but operators said they expected to resume operations within a week. Meager snowfall, early melt-off, and record-high temperatures—all bearing the fingerprints of climate change—set the stage for the conflagration, which has displaced a diverse population drawn to the region in search of work.

French oil giant Total agreed to buy battery maker Saft last week for $1.1 billion, a complement to its 2011 majority acquisition of SunPower. Total’s move follows wind-farm investments by Royal Dutch Shell and Norway’s Statoil, which are also diversifying beyond oil. In contrast, ExxonMobil doubled down on fossil fuels, backing a fuel cell that claims to capture CO2 from flue gases for sequestration, and fighting a shareholder resolution—newly backed by Norway’s sovereign wealth fund—that it disclose its carbon risks. ExxonMobil also battened down the hatches against demands to hold it accountable for denying what its own scientists told it about climate and carbon pollution, even as a 1982 essay by Mobil’s then-CEO surfaced, warning of climate impacts from extracting Albertan tar-sands oil. These petro-firms are playing for keeps: the current wave of 59 oil bankruptcies has claimed nearly as many companies as the telecom bust of 2002-03, analysts predict that oil prices will drop again this fall as glut conditions return, and The Economist warned that the oil majors must change their business model to thrive. Oil firms will return higher profits if they spend more judiciously on exploration, according to a new study by the Carbon Tracker Initiative.

Nuclear plants and plans under stress

Commonwealth Edison announced it will shutter two nuclear plants unless the state of Illinois approves price supports for their carbon-free electricity. The utility had demanded $300 million to keep the reactors running, but under a compromise, they’ll be funded only if revenues fall short of expenses. Meanwhile, the proposed $26 billion Hinkley Point nuclear plant came under fire when the UN found Britain hadn’t adequately consulted with neighboring countries that would be at risk in case of accident. Hinkley Point’s builders could get a bargain if reactors were mobile: the Tennessee Valley Authority voted to auction its $4 billion unfinished Bellefonte nuclear plant, mothballed in the 1980s, because it can’t foresee needing it for at least 20 more years.

Electric vehicles: will this change everything?

General Motors and Lyft will partner to deploy self-driving electric taxis, the companies announced last week. Their venture exemplifies two shifts—electrification and autonomous vehicles—that David Roberts says will transform US transportation. Joining the EV bandwagon are Volvo, which committed last month to sell 1 million EVs by 2025, and Germany, which promised $4,500 incentives to EV buyers. Not on the bandwagon: VW and Shell, whose preferred strategy of biofuels and fuel economy would impede Europe from meeting its carbon goals, say climate campaigners. As a side-benefit, used EV batteries can provide grid storage, an application already being tested with GM and BMW batteries to help accommodate solar and wind power on the grid.

We aren’t, uh, messing with you

Climate deniers released Climate Hustle last Monday, a two-hour long film narrated by lobbyist Marc Morano, for a one-night run in 400 theaters nationwide. The film earned a punchy seven-minute video rejoinder from late-night comedian Jimmy Kimmel, who disparaged right-wing politicians’ selective use of science, and then introduced a half-dozen climate scientists who insist that “we aren’t f***ing with you” when it comes to diagnosing the planet’s climate troubles—a segment that gave more airtime to climate scientists than ABC’s top news shows provided in all of 2015.

Image: Members of the Lummi Nation fishing from their canoes, near the site of the rejected coal terminal at Cherry Point, WA. Photo via Twitter.