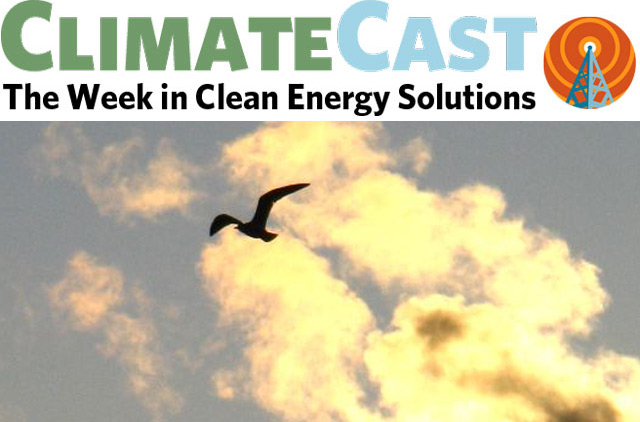 The German commitment to a renewable energy transition has slashed prices for solar and wind power worldwide, according to a front-page report in the Sunday New York Times. With the sun supplying 7 percent of the country’s kilowatt-hours and wind providing 10 percent, wholesale power prices have declined enough to endanger utilities’ bottom lines. Solar is set for further gains, according to researchers at Thomson Reuters who drew on patent filings and academic citations to pinpoint a handful of promising solar technologies. And in an effort to address the financing bottleneck for solar development in the U.S., a standardized method to evaluate solar projects has just emerged from beta-testing.

Climate change is against the birds

Audubon devotes its entire issue to climate change, headlined by a finding that half of North American bird species will find their habitat shrunken or displaced by global warming. The package includes a thoughtful essay by Dot Earth blogger Andrew Revkin on how to tackle the “super wicked” challenge of climate, useful musings by The New Yorker’s Elizabeth Kolbert on climate psychology, and profiles of climate activists who’ve crossed boundaries for the cause. But take their list of solutions with a grain of salt, with its claim that painting everyone’s roof white could offset the entire planet’s carbon emissions.

PricewaterhouseCooper is bearish on climate action

The world’s carbon pollution is decreasing slower than needed to avert dangerous climate change, according to a new study by accounting titan PricewaterhouseCooper. PwC reckons the reduction in terms of “carbon intensity”—emissions per dollar of GNP—and finds last year’s decline of 1.2% meager next to the 6.2% annual drop needed to stay within a 2-degrees-of-warming carbon budget. But it found hope in the deeper cuts achieved by the E7 emerging economies, including China, which lowered its carbon intensity by 4 percent. Even so, emissions grew by more than 3 percent, because of the country’s vigorous economic growth.

Ahead of next week’s climate summit in New York, the World Bank’s lead envoy to the talks predicted that several new regional and corporate plans to price carbon pollution would be unveiled. Her prognostication comes as a new survey on behalf of an investor consortium shows that 29 publicly traded U.S. firms, among 150 worldwide, factor the price of carbon into their planning process. That may prove to be a smart business decision, considering the growing number of jurisdictions where carbon pricing isn’t just a good idea, it’s the law.

For a glimpse of good news in the rear-view mirror, a new U.N. report finds the ozone hole is healing from damage done by chlorofluorocarbons, a quarter-century after the treaty to phase out these chemicals that expose the planet to harmful ultraviolet rays. Climate advocates hail the CFC phase-out as a tribute to the power of international accords to defuse a global environmental threat. Looking ahead, numerous clean-energy innovations from electric buses to grassroots movements are profiled in this year’s Sustainia 100, a compendium of efforts with the potential to transform the world toward greater sustainability.

The U.S. Army Corps of Engineers halted review of Ambre Energy’s coal shipping terminal application at the Port of Morrow in Boardman, OR, even as Ambre and the Port appealed the state Department of Lands decision rejecting the coal giant’s export facility plans. A new Sightline report finds that proposed coal, oil, and gas facilities in the Northwest would carry five times as much carbon as the Keystone XL Pipeline. A Colorado judge castigated the Obama Administration for ignoring the social cost of carbon when considering the permits for a coal mine on federal land, even while it tries to rein in emissions at the smokestack.

Climate-caused crisis in the oceans on both coasts

Reuters released the first part of an analysis of the “slow-motion disaster” that rising sea levels present for the U.S. coastline.  Waterfront properties are becoming harder to sell on Cape Cod as prospective buyers become aware of rising sea levels, flood zones, and storm surge areas, in part thanks to new maps that redefine the Cape’s flood risk for the first time in decades, assuming a six-inch sea-level rise. In other marine impacts, increased carbon dioxide in the ocean around Penn Cove, WA, the nation’s largest area for mussel harvesting, is causing mussels to lose their grip on shorelines and commercial harvesting ropes.

RMI reports on creative solutions to bring low- to no-cost solar systems to low-income families in five states, saving 40 to 75 percent in electric bills. In one, families contribute sweat equity and then pay a nominal price for leasing the solar system. Another provides leased solar systems to low-income people in the Imperial Valley, where 120-degree summer days make for wallet-straining air-conditioning bills. Overseas, the World Bank has dialed back its investment in fossil-fuel projects to just 14 percent of its new energy loans; has now gone four years without funding a coal plant; and spent the highest amount ever in energy financing for low-income countries.

Nevada landed Tesla, but should it have buyer’s remorse?

The week after Nevada sealed the deal for the Tesla battery factory with $1.3 billion in subsidies, the state came in for criticism for over-bidding with a package worth $200,000 per job, while industry observers questioned whether Tesla would sell enough cars to keep the factory humming. The three West Coast states forged ahead with plans for an “electric highway” offering charging stations every 50 miles or less on Interstate 5, while California registered its hundred thousandth electric car in four years. But the EV frontiers may lie in Chicago, where entrepreneurs produced a carbon-fiber electric vehicle in one piece on a 3-D printer.