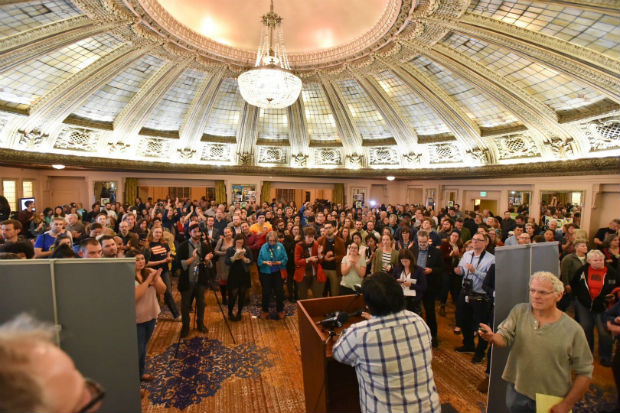 Tags
I-1631
The Good, the Tough, and the Just Getting Started
Gregg Small
November 8, 2018
Wow, what a night Tuesday was.
Here is what we know so far about how climate and clean energy fared on the ballot in the Pacific Northwest. In both the Washington and Oregon Legislatures, the picture got brighter. Voters elected a number of climate champions, and there are still a few very close races with ballots still being counted.
In Oregon, City of Portland voters delivered a very big victory with the overwhelming passage of the Portland Clean Energy Initiative with nearly 65% support. The initiative creates a new fund that will result in significant clean energy investments in low income communities. Oregon voters also stood with immigrants and rejected racial profiling by overwhelming rejecting Measure 105. For over 30 years, local law enforcement has not been allowed to detain or interrogate people based solely on suspicions about their immigration status. Measure 105 sought to repeal that sanctuary law, and it failed.
Yet in Washington, the oil industry bought an outcome, as I-1631 did not pass at the ballot. It is a very hard outcome. The initiative would have invested $1 billion in clean energy, local jobs, and healthier forests, and prioritized communities hit hardest by pollution through a fee on the state's worst polluters.
Most anyone living in Washington experienced at least some of the oil industry advertising onslaught, as the No on 1631 campaign spent a state record of more than $32 million on a people’s initiative. More than 99% of the money came from out of state oil companies. I watch sports and a lot of ESPN, and all I saw during the World Series was a sea of oil industry funded ads on commercial breaks. They targeted sports fans like me, and given the war chest of their scale, they were able to target almost every voter with false and misleading information.
Yet the I-1631 campaign was unique for another and much more powerful reason. In all the years I have worked on climate action and public interest issues, I have never seen support for a campaign and coalition like the one for I-1631. It is not often that Bill Gates, Pearl Jam, Microsoft, Van Jones, the Front and Centered coalition, Tribal Nations, a majority of labor unions, a plethora of environmental groups, and more than 500 organizations and businesses all come together around one effort along with thousands of volunteers. No matter how one looks at the result, that is not a defeat. It’s a major victory for a call to act on climate.
This is just the beginning for what we can collectively do together — be it at the ballot, in the legislature, in city halls, corporate boardrooms and our communities. There is much more to come in the days and weeks ahead, and we'll have more to ruminate on, communicate, and also ask of you as we all look ahead at what's next.
Thank you for all your contributions to democracy and the collective good for our climate leading up to Election Day.