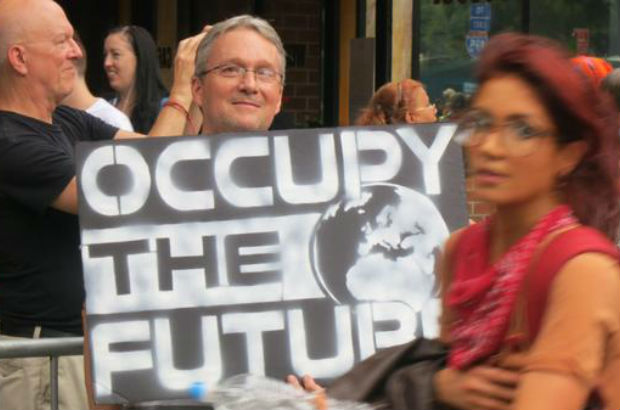 Climate Week draws to a close, a resounding success in focusing the world’s attention on the importance of addressing climate change. The UN Climate Summit 2014 was the catalyst for the week's events. It remains to be seen what will happen 15 months from now when world leaders gather in Paris for the 21st UN Climate Conference, but there is no question that the political paradigm around climate change shifted this week in New York.

The goal of last Sunday’s People’s Climate March, which kicked off a week of 145 climate-related events in New York City alone, was to rally 100,000 people from all walks of life to demand climate action and climate justice now. Turnout far exceeded that goal. The 400,000 people marching through Manhattan represented the largest call for climate action to date, and that call was amplified by demonstrators in more than 2,000 cities around the world.

The week’s wide array of events and demonstrations successfully shifted the meme that prevailed at the December 2009 Climate Change Conference in Copenhagen. The focus there was on how expensive it would be to address climate change and who should bear those costs, a worthy but difficult conversation that effectively thwarted hopes of a new climate treaty.

In contrast, the 125 heads of state and a variety of business and other leaders who gathered this week for UN Secretary-General Ban Ki-moon’s UN Climate Summit 2014 were hard-pressed to miss the “moral imperative and the epic economic opportunity” of tackling the issue, to borrow a phrase from Oregon’s First Lady Cylvia Hayes speaking at a discussion about regional action on climate mitigation and resilient infrastructure.

The tagline for last week's UN Summit, which will lay the groundwork for next year's meeting in Paris, was “Catalyzing Change.” It was clear at every meeting and in every discussion that the momentum has shifted significantly in the past five years. The urgent need for substantive climate action and the economic opportunity in a transition from fossil fuels to clean energy were front and center.

Several key factors contributed to this change in the climate conversation. They include the rising costs of extracting and transporting fossil fuels, combined with decreasing costs of renewable energy sources, particularly solar; an appreciation that climate impacts are happening now and not in some distant future; the growing recognition within the financial community of the risk exposure associated with unburnable carbon, the fossil fuel reserves that cannot be tapped because of their climate impact; and various climate and energy policies that have emerged at state and national levels since 2009, notably in China and California.

California's cap-and-trade program is an example of another fundamental shift since Copenhagen: There has been a significant uptick in action on climate at the state, regional and city level, a point that globally-recognized climate change mitigation and urban resilience expert Rohit (“Rit”) Aggarwala of Bloomberg Associates drove home in his keynote remarks at the regional meeting.

Aggarwala currently serves as Advisor to the Special Envoy for Cities and Climate Change of the UN Secretary-General. He recounted how his boss, former New York City mayor Michael Bloomberg, could not get credentialed at Copenhagen because mayors were considered part of "civil society" and therefore not eligible to sit at the tables where climate agreements were discussed.

“It is fundamentally misguided to assume that the nation-state is sovereign to all else,” Aggarwala asserted. “There are limits to the actions that can be taken at the national level and it is at the sub-national level that action is happening because mayors feel the impacts of climate change and are on the line to deliver the services their citizens demand.”

Aggarwala also noted that because discussions at the national level are abstract, they quickly become ideological. In contrast, noted Aggarwala, “As Mayor LaGuardia once said, 'there is not a Democratic nor Republican way to pick up the garbage.'”

The Climate Week gathering illustrated just how diverse, engaged and urgent the call to action around climate change has become. 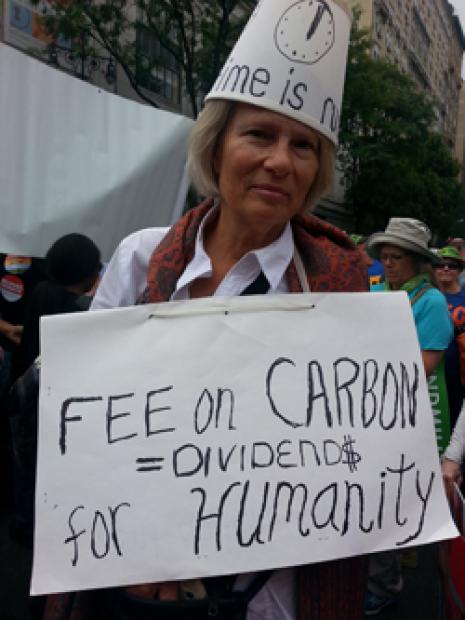 Ordinary people like this woman from rural Virginia wearing the odd lampshade hat and carrying the handwritten sign proclaiming her support for a carbon tax and dividendprogram she was petitioning her rural energy supplier to adopt. “I don’t understand how it all works," she said, "but I should have a say as a ratepayer in how clean my energy is, so I am getting educated and involved.”

Corporate America is also coming around. The New Climate Economy released a report by the Global Commission on the Economy and Climate titled Better Growth Better Climate. The Commission is comprised of economists, politicians and business executives. Its report made the case that economic growth and aggressive climate action are not at odds with each other, but in fact go hand-in-hand.

On Monday, the not-for-profit Carbon Tracker Institute (CTI), a team of experts on finance, energy and the law, issued its second of three reports on carbon supply cost curves at an invitation-only investor briefing held in the posh Bloomberg headquarters. The key takeaways: fossil fuels contain risks that make neither financial nor climate sense; solar and other renewables are disrupting the utility industry's current business model; and high-cost carbon projects (like oil pipelines and coal terminals) will put over $1 trillion of capital at risk over the coming decade.

Shareholders have also begun to speak out on climate change. In one year, shareholder resolutions demanding that companies take climate change into account rose from 6 percent to 34 percent of all shareholder resolutions filed. In addition, 345 investors called on the United Nations to act on climate and are demanding a price on carbon, according to Mindy Lubber, President of Ceres, a nonprofit organization that mobilizes investors and companies to accelerate sustainable business practices.

The divestiture movement is growing as well. The Rockefeller family, whose name is synonymous with oil, just announced that its $860 million philanthropic foundation would divest of all its fossil fuels holdings, citing both the “moral and economic dimension” of investing in companies whose activities contribute to global warming. The Rockefeller Brothers Fund is one of 180 institutions with assets valued at more than $50 billion that have vowed to sell off their fossil fuel energy stocks.

While meaningful action on climate legislation has been largely absent in Washington, D.C., leaders at the local and regional level have been busy. You need only look to the Northwest to see local leaders wrestling with how to reduce carbon output. The Pacific Coast Climate Action Plan, which was cited at one of this week's regional panels, is the result of climate leadership from Christy Clark, Prime Minister of British Columbia, California Governor Jerry Brown, Oregon Governor John Kitzhaber and Washington's Jay Inslee. (Gov. Inslee is ablysupported in his climate efforts by King County Executive Dow Constantine and by the 13 mayors of the King County-Cities Climate Collaboration.)

In another case of localities taking energy matters into their own hands, this month, Burlington, VT, became the first US city powered by 100 percent renewable energy when residents there persuaded their local utility to purchase a nearby dam so that hydro-electric power could provide the remainder of the electricity.

Climate Week also gave voice to the victims of climate change, few as elegant as 26-year old poet Kathy Jetnil-Kijiner. Rising sea levels threaten to swamp her Marshall Islands home. When she read this moving poem at the Opening Ceremony of the UN Secretary-General's Climate Summit on Sept. 23, she received a standing ovation.

The more radical voices on the progressive left also rang out this week. Their core messages, the need for justice and the inequitable concentration of economic power, remain critically important and were a driving force for the march’s success. But the dominant message was not about building a movement aimed at stopping something, as Occupy Wall Street is. It was a call to start something, a movement so monumental that it will ensure we have a future to occupy.

This article was cross-posted from Crosscut.