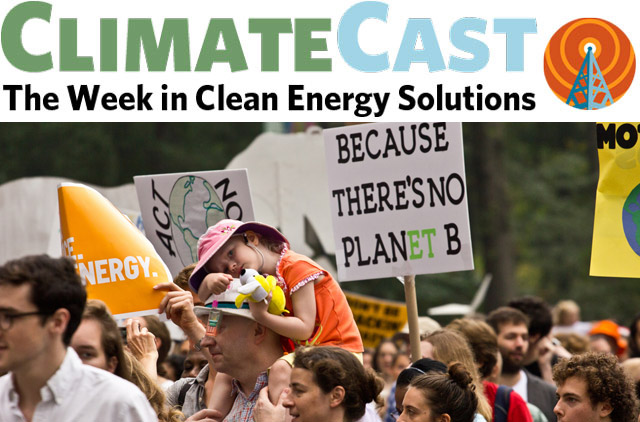 Two days after the largest climate march in history, the U.N. summit on climate yielded a laundry list of promises from dozens of countries and inspiring poetry, but few new commitments to help poor countries develop without relying on fossil fuels. President Obama’s speech came in for scrutiny both for what he did say and what he didn’t, prompting observers such as the European Union’s climate commissioner to withhold judgment until Obama lays out his plan for the U.S. to decarbonize beyond 2020. The “all of the above” approach he has advocated in the past was further undermined by a new study arguing that natural gas would actually hinder a shift toward renewables, because it could reduce clean energy’s economic advantage.

As the dust settled from climate week in New York, its greatest impacts appears to have been raising the profile of climate on the political and economic agenda and re-energizing activists working on the issue—including Climate Solutions’ own staff. The moment was ripe: in two national polls conducted before the march, Americans’ concern about climate had recovered towards levels seen before the recession. Nevertheless, structural inertia in the American political system makes it hard to imagine a Congress that would support climate action, particularly in the face of rationales for climate indolence like Steven Koonin’s in The Wall Street Journal, no matter how quickly, elegantly, and thoroughly refuted. As businesses and subnational governments forge ahead of their “leaders,” the conversations about progress without a treaty become all the more significant.

The climate vortex last week in New York elicited fresh pledges from businesses, many of them new to the cause of climate action. In various combinations, firms promised to end deforestation for palm oil production, to use only renewable energy by 2020, and to invest more in clean technologies—a trend that extended to the Beaver State, where the 200th company signed the Oregon Business Climate Declaration. Business’s interest can draw badly needed capital into renewables, and at no financial penalty: according to a new report from investment bank Lazard, unsubsidized solar and wind are drawing even with the costs of fossil energy.

Even as world leaders and civil society gathered to avow their disdain for carbon pollution, new figures were released showing that emissions in 2013 had increased over the previous year. While it isn’t news that the world has yet to reach Peak Carbon, the story did prod journalists to explain why Germany’s emissions are rising despite its vaunted shift toward renewables: a simultaneous phase-out of nuclear power has led to more coal-fired generation. For a global view, the Guardian published an interactive map of carbon pollution by country, which displays current emissions, historic consumption, and enough other data to appeal to the wonkiest climatista.

On the eve of the UN Climate Summit, KLM announced it would partner with Amyris-Total to supply a 10 percent blend of renewable jet fuel to power KLM aircraft. Starting in January, a Swiss-made solar-powered aircraft will attempt to fly around the world, launching from United Arab Emirates capital Abu Dhabi, which has spent billions of dollars on clean energy initiatives. These low-carbon aviation innovations were announced as a new International Renewable Energy Agency (IRENA) report suggested that sustainable biomass will play a major role in the world energy mix by 2030, with roughly 30 percent of the total biomass used to produce biofuels.

Shifting winds may have caused regional warming...or did they?

The narrative that climate change is already affecting the Pacific Northwest hiccupped last week with the release of research suggesting that most of the last century’s 1 ˚F of West Coast warming was caused by natural wind patterns independent of global warming. Scientific reviews of the study, however, questioned the authors’ methodology and choice of time frame, and argued that man-made climate change shows a connection to the region’s warmer weather since 1940. Separately, Stanford researchers published findings that greenhouse-gas pollution triples the probability of the weather pattern that caused the current California drought.

The perils and promise of solar success

Hawaii’s solar industry has shed over half its 5,000 jobs because the utility is delaying solar permits where solar production exceeds daytime usage and the grid hasn’t been upgraded to accommodate. California got ahead of that curve by requiring storage on the grid, leading one utility to bring the world’s largest battery on-line. New Texan transmission lines opened the floodgates of solar installations, with over 3,400 megawatts in the pipeline in a state where only 75 megawatts were installed last year. As photovoltaics spread, a sleeper issue may affect their economics: utilities’ payment system for rooftop solar output may affect whether the compensation is taxable and how much homeowners may claim in federal tax credits.

There are lives in the balance

A special eight-page edition of The New York Times’ Science Times called “Nature in the Balance” explored various trade-offs of climate change. Scientists around the world are attempting to simulate future growing conditions to determine what can be done to make crops more resilient. A new Climate Central analysis of sea level and flood risk around the world predicts 177 million people will be living in a place at risk of regular flooding in the next 100 years—small comfort indeed to first-time home-buyers weighing the risks of locating near water or on flood plains.

It’s just not all that black and white

Facebook joined technology giants Google, Microsoft, and Yelp in deciding not to renew its membership to the American Legislative Exchange Council (Alec), a state legislation lobbying organization that has opposed carbon emission-curbing legislative proposals. Google’s very public denunciation of Alec on National Public Radio, in which its chairman, Eric Schmidt, accused Alec of “lying” about climate change, met a swift rebuttal from the lobbying group that was somewhat undercut by the fact that Alec’s model legislation asserts that a warming planet could be beneficial. In a final twist though, it turns out that Google and Schmidt have made significant donations to political candidates who deny climate change science.