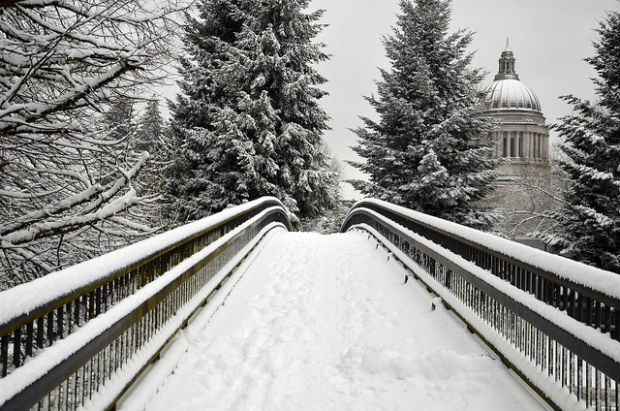 For those of us who spend our days making the case for climate action in the Washington State Capitol, martial metaphors often come more vividly than others. This session, outnumbered as we always are by the numerous and well-resourced lobbyists for fossil fuel companies and their dependents, we started drawing comparisons to the Battle of Thermopylae, where a few hundred soldiers from Sparta and Thespiae, outnumbered 150 to one by a Persian army intent on taking Greece for itself, held off the invaders for a week.

There were about five of us there full time from several organizations urging the Washington Legislature to pass HB2995, a 100% clean electricity bill that would gradually phase Washington state off of fossil fuels. For comparison, Puget Sound Energy, one of Washington’s 64 utilities, has seven lobbyists on payroll. Avista has three. Invenergy, which operates a large fossil gas plant in Grays Harbor County, has two. And that’s just the private utilities—it doesn’t include the army of public utility lobbyists, large industrial concerns, business groups and others.

All of them lined up to say that if we passed a law to gradually wean us off fossil fuels, the sky would fall. No matter how the policy evolved, this phalanx repeated the same false refrains: that the transition off fossil fuels would lead to high electric bills and blackouts. Evidence to the contrary be damned—these industries were going to fight to keep the world safe for fossil fuels.

As ever, they said this session was the wrong one to act on climate and we should wait until next year (spoiler: ‘next year’ never seems to come).

The Washington State Legislature had an ambitious and effective session this year by many metrics. They advanced pay equity, gun control, took a stand for the proposition that voting should be easier, protected student loan borrowers, and a variety of other measures that advance the cause of equity and justice. But on climate they failed almost completely. They (and we, in future blogs) will point to meaningful investments in clean transportation, renewable energy, and conservation, plus support for the building code council and a new incentive for renewable natural gas. But make no mistake—this Legislature passed no major climate policy and in no way did they disrupt the fossil fueled status quo. In case there was any doubt—a Democratic majority is not a climate one.

But through this doom and gloom, I should make clear—we all, together, made a dent. Legislators came to us and said they were hearing from their constituents back home demands for climate action. Those calls turned fence sitters into supporters. 100% fossil free policies have been introduced in the legislature for years, but they’ve never made it out of a single committee. This year, four separate committees in both chambers passed versions of the 100% clean electricity policy; all but one of them included votes from both parties.

As the House of Representatives geared up for a 100% fossil phase out conversation, we saw new and old leaders emerge. Senator Kevin Ranker, who approached us before session about working on 100% clean power, worked until the last day to make this policy law. Representative Mike Chapman, a rural legislator who heard fictional horror stories from opponents, rejected every scare tactic and pushed his colleagues to take visionary action this year. Representative Beth Doglio worked hard to craft policy that threaded the political needle. Representative Gael Tarleton, who as a member of leadership has huge responsibilities unrelated to climate, kept 100% clean in play until the last day. Representative Gerry Pollet pushed far past his own comfort zone to craft a compromise that was key to ensuring this proposal didn’t die weeks ago. Representative Joe Fitzgibbon, the House of Representatives’ most constant and committed climate advocate, again made the case diligently and consistently that we have to DO SOMETHING.

These are climate warriors. They worked hard and left everything on the field. As the last day wound down, several of them came to us and started talking about next steps—about how this law gets done next year. Session wasn’t even over and they were gearing up to fight this one again.

And that’s the thing with the Battle of Thermopylae. When it has been profiled in fiction, the story usually ends with the brave stand of warriors as Xerxes’ massive Persian army finally flanks the Greeks from behind and defeats them with a shower of arrows. But Thermopylae was the first battle in a broader conflict, one in which the Greeks repelled for a final time their much stronger foe.

We will demonstrate that a fossil free world is not only possible, it’s desirable. We will work late hours, volunteers will make the calls, and the grassroots will demand action. We will thank our champions and we will hold opponents accountable.

2021 Washington climate wins are real
Can you believe it? Believe it: climate progress
We're making history. Let's not stop.
We're Past the Halfway Point