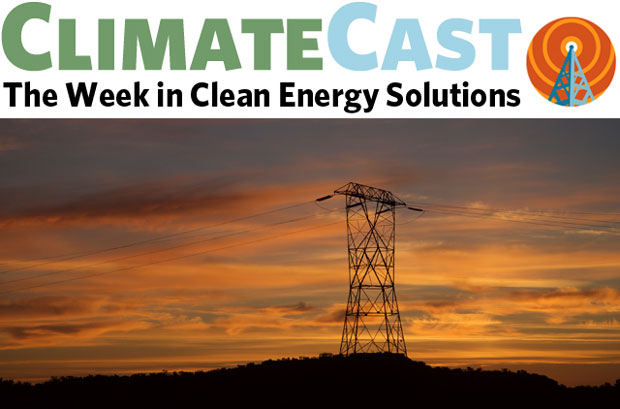 Solar hits record-low price, half that of coal

While Olympic records have fallen in Rio, on the other side of the Andes Chile set a world record for cheapest solar power with a bid to operate a photovoltaic farm for 2.91 cents per kilowatt-hour, about half the price of coal in the same auction. Community solar farms are poised for growth in the US, as industry estimates 1,700 MW could be installed in the next five years, on top of the 100 MW already in operation. A new analysis from California finds 4.4 GW of rooftop panels behind customers’ meters, amounting to nearly a third of the state’s solar capacity. These ten charts summarize solar power’s increasing success and affordability, leading state rebate programs to reach their budget caps and feeding the argument that they do not need to be renewed.

Developers last week completed the first US offshore wind farm near Block Island, RI—a five-turbine installation that proved more successful at navigating obstacles than a controversial 130-turbine project once proposed for the waters off Cape Cod. As technology improves, US wind farms are producing cheaper power (averaging 2 cents per kWh) and generating power more of the time, with newer farms registering capacity factors in excess of 40 percent. Behind this progress are advances such as sophisticated wind modeling, which the Danish turbine-maker Vesta uses to predict energy production precisely and tailor turbine farms to avoid harmful turbulence. Sun and wind supplied 8 percent of the electricity to the G20 countries last year, up from 4.6 percent in 2010.

Heavy-duty trucks will use 25 percent less fuel by 2027, according to new federal standards finalized last week for tractor-trailers and specialized vehicles such as garbage trucks and schoolbuses. The standards will reduce climate impacts 10 percent more than the previously published draft, but nonetheless won the support of the trucking industry. In the passenger-car sector, manufacturers are replacing rivets with adhesives like those used in the Boeing Dreamliner, shaving hundreds of pounds off the cars’ weight and boosting their fuel economy. By 2022, buying and fueling an EV will cost less than a gas car, according to a new Bloomberg study. In the first four months of this year, EV sales were up 42 percent over the same period last year, putting them on track with targets needed to hold global warming under 2˚C. While the public recharging network grows, EV owners are sharing their plugs with each other using a peer-to-peer app that has been dubbed the “Airbnb of charging.”

Fossil investors may be in for nasty surprise

The Exxon Mobil investigation is aimed at the possibility that the firm is overstating the value of its fossil fuel reserves, not just that it knew climate change was real before acknowledging it publicly, New York Attorney-General Eric Schneiderman said last week. If #Exxonknew that climate change would become too severe for all its reserves to be extracted and sold, Schneiderman said, then it shouldn’t claim their full value as assets. In a similar vein, a UC-Davis analysis shows that continued growth in world oil demand is far from certain, meaning that petroleum investors should evaluate their holdings more strategically, said an op-ed in the Financial Times last week. The argument seemed prescient as crude fell 3 percent in Monday’s markets.

More than 20,000 people had to be rescued in Louisiana two weekends ago when the state was swamped by flooding that would ordinarily be expected no more than once every thousand years. But these are not ordinary times, and climatologists pointed out that global warming packs the atmosphere with more water vapor, making intense rainfall more likely. Wildfires become more common in a hotter world, too, exposing more people to polluted air in a phenomenon being dubbed “smoke waves.” The unusual warmth that plagued over 3 million square miles of the North Pacific for most of 2014 and 2015 has dissipated, although the effects may presage the impact of a warmer world, according to this lavishly illustrated National Geographic article. In a bright spot, a Pacific coral reef bleached by heat in the early 2000s is recovering, offering hope that heat damage to coral reefs may be reversible.

July 2016 was the hottest month in recorded history, according to figures NASA released last week, complete with a graph showing just how anomalous this year has been. Temperatures have been at least 1˚C above long-term averages for every month but one in the past year, and are approaching the +1.5˚C level set as an aspiration last December in Paris. This warming will translate into a jump in the number of over-100˚F days that can be expected annually, mapped here by NASA. In the face of these developments, author-activist Bill McKibben fleshed out the metaphor of responding to the climate threat as the Allies responded to the Axis powers during World War II—a metaphor that garners both praise and criticism from Vox’s David Roberts.

Washington State will fund several pilot projects in next-generation grid technologies, Gov. Jay Inslee announced last week, including a community solar power system that will postpone having to upgrade the submarine cable supplying the San Juan Islands; a solar-powered microgrid at a Seattle emergency-response command center; and a Snohomish project that integrates solar generation, battery storage, and EV charging. The projects are part of a trend to add intelligence to the utility network, such as smart inverters that enable solar arrays to help alleviate disruptions to the grid and electricity storage that power dispatchers can summon as needed. The growth of these emerging technologies can break the correlation that economic researchers identified between growth in renewable energy and new natural-gas power plants.