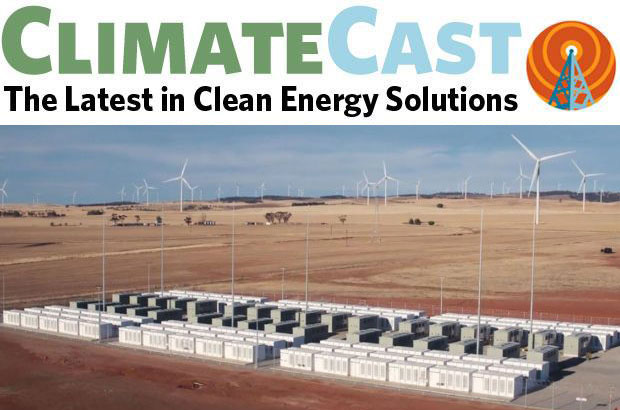 Washington state Governor Jay Inslee announced last week his proposal for an ambitious carbon tax to reduce emissions, calling upon the state legislature to “step up” efforts to slow climate change. And the Oregon legislature is working on its own proposal to cap and price climate pollution. On the East Coast, the City of New York announced plans to divest its pension fund of fossil fuel assets,making it among the largest of investors to divest. That’s not all; the city will also sue oil companies, potentially helping pay for state climate adaptation efforts. Virginia is moving forward with plans to join the Regional Greenhouse Gas Initiative (RGGI), a multi-state effort to reduce and price pollution from the utility sector. If Virginia joins, it will be the first Southern state to put a price on carbon emissions.

From Buffalo to Beijing, the clean energy economy scales up

About half of new utility-scale power on the U.S. grid last year came from renewables, according to the US Energy Information Administration. Tesla has begun production of its solar roof tiles at its plant in Buffalo, NY. Further south, Florida Power & Light retired another coal-fired power plant -- the second in a plan to eliminate all coal from their power mix. They also kicked off the new year by delivering clean energy from four new solar power plants. The global clean energy economy is scaling up, too, with India reporting over 4,000 megawatts of new solar projects and electric car sales in China rising 80% from last year. In related news, Ford is investing $11 billion by 2022 to launch 40 new electric cars and hybrids worldwide. In Australia, home to the world’s largest Tesla battery, South Australia now plans to build the world’s largest solar thermal plant. Even oil companies see a future in renewables; as global demand for wind power grows, major oil companies are diversifying their portfolios to develop offshore wind.

US Secretary of the Interior Ryan Zinke released a plan to open up the nation’s coastlines to offshore drilling, a decision that not only incited widespread outrage, but may have also violated federal law. This move comes not too long after the Trump administration decided to roll back offshore drilling safety regulations established after the 2010 Deepwater Horizon spill. Finally, a new report reveals a “significant loss of public access to information about climate change,” following the Trump administration’s efforts to systematically remove climate change materials federal government websites.

“Bomb cyclone” here, melting asphalt there: a world of impacts

California wildfires may now be contained, but their effects are unrelenting. Deadly mudslides have damaged more than 400 homes and killed 20 people. While brutal storms wreaked wintry havoc on the east coast, temperatures are unseasonably warm in rural Alaska, impacting everything from hunting to recreation activities. On the other side of the equator it’s also way too warm -- hot enough to melt asphalt in Australia. As climate impacts stack up in severity and frequency, so do their costs. Insurers are set to pay out a record $135 billion to cover losses due to 2017 hurricanes, earthquakes and fires in North America alone -- the largest payout ever.

A state-funded study of the Oregon Columbia River levee system highlights the growing need to strengthen local flood control systems. Climate change is already causing more extreme weather events and rapid snow melt -- two events known to trigger flooding in the Columbia River system. Cuba, bounded by thousands of kilometers of low-lying coastline, is embarking on a resiliency plan to better protect itself from climate change. The plan was adopted last spring, but Hurricane Irma created a new sense of urgency around it. New York is redrawing its flood maps for the first time in over three decades, taking into account the impacts of increasingly severe storms and sea level rise from climate change.

In brief: Climate change and the refugee crisis

It’s no secret that climate change and economic and social instability are linked. But precisely how? And how much? Well, a new study helps to suss it out. Examining the link between climate change and the refugee crisis, researchers found that when temperatures in agricultural areas vary too far from an “optimal” range, the number of people seeking asylum increases. Researchers also found that, if we fail to significantly reduce emissions and proceed with a “business-as-usual” climate scenario, asylum applications could double by the end of the century.