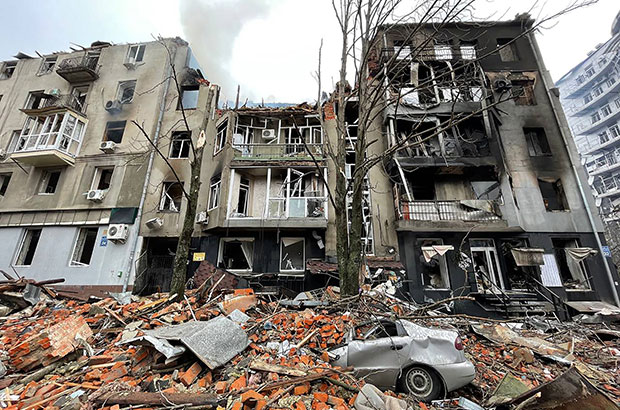 For years, I have watched as friends of mine in Ukraine and Russia have pleaded with Western governments to stop supporting Russian dictator Putin–not just politically, but financially, through the purchase of fossil fuels. Even “climate-friendly” politicians ignored them. Unfortunately, Western environmentalists generally did not take up their cause either, not making the connection specifically between purchasing fossil fuels and funding an incredibly repressive, brutal dictator: Putin. And so, here we are. It is time to finally listen.

Russia’s brutal attack on Ukraine was and is funded by the continuous purchase of Russian oil and gas—despite warnings from opponents of the Putin regime. These petrodollars make up over a third of the Russian state budget, and oil and gas accounted for 60% of Russian exports in 2019. I have many friends in and from Ukraine and Russia who have borne the consequences. Friends in Ukraine have had to leave their homes to escape the worst of the attacks. Ukrainian friends living elsewhere anxiously await updates from family members sleeping in metros that have been converted to bomb shelters, and from others that have joined territorial defense units. Russian friends, already forced into exile years ago, who are now scrambling to protect their activist colleagues still in Russia, or who are currently fleeing, as well as assisting refugees from Ukraine.

The large-scale Russian invasion of Ukraine began in the early hours of February 24th as the Russian military began to rain missiles down on cities and troops crossed the border. Russia’s war on Ukraine actually began eight years prior to this escalation, with the annexation of Crimea and Russian military operations in eastern Ukraine. Russian military aggression in these areas has caused over 13,000 deaths and created over 2.5 million refugees, most of whom were internally displaced within Ukraine. Now, in just the past month, nearly 4 million people have fled Ukraine, while 6.5 million—including a friend of mine—have been forced from their homes but remain in the country.

The destruction that Russia has visited upon Ukrainian cities—bombing residences, hospitals, schools—is staggering. The city of Mariupol, population 400,000, has turned into "ashes of a dead land" according to its city council. Kharkiv, normally home to over 1.4 million, has been pummeled with cluster bombs; most of the city no longer has heat. The leveling of these cities is reminiscent of Russia’s bombing campaigns of Aleppo and Grozny. These are just a few examples from Ukraine today.

Every one of these numbers—of refugees, of casualties—represents a whole life. Ukrainian journalist Nadezhda Sukhorukova describes her time in besieged Mariupol in diary entries: “I’m not going to be buried if I die while hostilities are still going on. That’s what the police told us: we stopped them in the street and asked what to do with the dead grandmother of our friend. They advised us to move her to the balcony. I wonder how many dead bodies are lying on people’s balconies?” My Ukrainian friend, who helped translate these words, said upon finishing “I passed out, my body shut down, the life in it refusing to comprehend the unspeakable horror.”

Putin’s military adventures have occurred alongside brutal repression within Russia. This January, a close friend of mine, Evgenia Chirikova, posted a photo of herself at a 2012 Moscow protest with the caption, “This photo is from a past life, and in it you can track the three main fates for active citizens of Russia. Alas, our Motherland is not especially kind to her children. She kills, expels, or throws in prison those who really try to change something.” In Russia, even standing alone, holding a sign, can lead to arrest.

Russia’s colonial warmongering and brutal domestic oppression are funded by the sale of fossil fuels. It’s worth noting that in Russia’s kleptocracy, the largest fossil fuel companies are majority state-owned, while others are managed by oligarchs friendly to Putin. This is no secret, but human rights and climate be damned, the money kept flowing. Europe spends as much as $1 billion per day on Russian fossil fuels. The United States, a net petroleum exporter, relies less on Russian oil and gas, with the bulk of petroleum imports coming from Canada; nonetheless, about 7% of imports are from Russia (we import a similar amount from Saudi Arabia, itself no paragon of human rights).

Russian activists have been asking other countries to swear off Russian fossil fuel imports for years—unfortunately to no avail until the past month. A demonstrative example is the Nord Stream 2 project: a gas pipeline from Russia to Germany.  Nord Stream 2 AG’s CEO is Matthias Warnig, a former Stasi member who befriended Putin during his KGB days; that company is owned by fossil fuel giant Gazprom, itself primarily owned by the Russian state. The three neighboring Baltic nations lodged objections to the project, along with Poland, and, of course, Ukraine (all five countries have been subject to Russian and Soviet colonialism). However, Germany went along with this project for “business reasons,” as if decision-making could happen in a moral vacuum. As Evgenia Chirikova wrote in 2017 for The Guardian, this project proceeded “after the annexation of Crimea by Putin’s Russia, the war against Ukraine, and the shooting down over Ukraine of the MH17 passenger plane. European consumers will pay for the gas, and the money will go to the Putin regime, strengthening it. There is a high probability that, as usual, the Kremlin will spend the proceeds on propaganda, repression, new wars, and annexations – and Europe will be paying for it.” And here we are.

Unfortunately, pleas for Western nations to stop purchasing Russian oil and gas were not heard until February 24th. Following the invasion of Ukraine, BP, Exxon, and Shell have pulled back from Russian investments (though Shell did purchase 100,000 metric tons of Russian crude in early March). The U.S. banned the import of Russian oil, liquified natural gas, and coal. Europe has discussed weaning itself off Russian fossil fuels—a harder task given the net it has entangled itself in—but continues to bankroll Putin’s regime. As of this writing, the European Union has paid Russia more than $21.9 billion for fossil fuels since February 24th.

Ukrainian Foreign Minister Kuleba was clear in expressing his country’s freshly urgent objection: “We insist on a full embargo for Russian oil and gas. Buying them now means paying for the murder of Ukrainian men, women and children.”

It is shameful that petrodollars continue to flow to Putin’s pockets. We must demand of our governments: no fossil fuels from Russia! This is only the first step: for climate and human rights reasons, we must move away from fossil fuels no matter where they come from. We need to fund and increase heat pump installations, electrifying our buildings and saving energy. We must rapidly move our transportation system to clean fuels, such as electricity. We need to build out better transit service and other options for getting around. We need to make polluters pay and reinvest those dollars in equitable climate solutions. Drilling more at home or buying from elsewhere only addresses short-term political or economic demands, but does nothing at all to alleviate the horrible burdens of our dependence on fossil fuels.

Now, we also need to support Ukraine. Please consider donating to this fundraiser, organized by a friend of a friend, to purchase and supply medications and defense equipment for Ukrainians protecting their country. For a larger, more established initiative, consider Razom. Finally, here is a list of organizations that are providing direct assistance in intersectional ways—see what resonates with you. All could use support, so sharing also helps!

Stand with Ukraine and demand an end to fossil fuel purchases from Russia—supported by a clean energy transition.