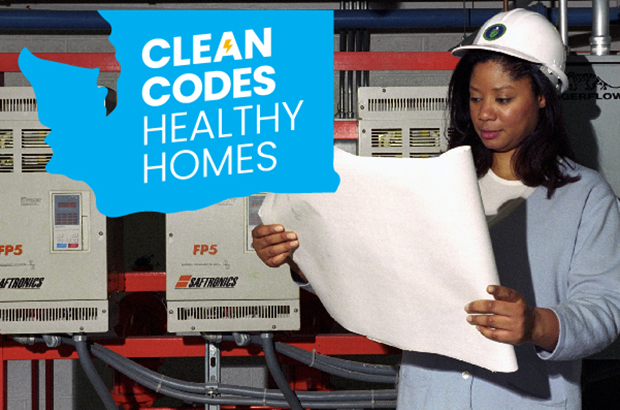 On Wednesday, June 29, Washington’s State Building Code Council moved to bring its code for new residential buildings up to parity with the commercial buildings code — which made headlines earlier this year for becoming the strongest, most climate-friendly building energy code in the country, and driving the transition to clean electricity for space and water heating. Today, the State Building Code Council sent a set of proposals forward to public comment, that include requirements for heat pumps for space and water heating, as well as ventilation improvements for new homes with gas stoves. These proposed codes would cover new single-family homes, townhomes, and low-rise multifamily buildings (three floors and shorter) and be the first statewide action requiring heat pumps in new residential construction.

Also included in the residential energy code proposals are key energy efficiency and electrification measures that would, combined with the commercial code updates, be the strongest climate-aligned energy codes in the nation.

The proposed building codes are an important continuation of Washington’s efforts to stop emissions from the buildings sector, which is the fastest-growing source of climate pollution in Washington state and a major source of toxic air pollution.  The provisions for increased ventilation for homes with gas stoves would reduce indoor air pollution for Washington families, in the wake of a study published yesterday by Harvard T.H. Chan School of Public Health and other researchers, finding that the chemical makeup of gas in kitchen stoves contains at least 21 different hazardous air pollutants including benzene that are known or suspected to cause cancer or other serious health problems.

The full package of proposals can be viewed here.

Building electrification and decarbonization part of a continuing trend

Clean, electric energy codes are increasingly being utilized as a central tool in cities and states across the country to reduce emissions, reduce maintenance and operational costs, prioritize public health and safety, and meet climate goals. Washington’s efforts on both commercial and residential buildings adds to the wave of actions around the country including approximately 72 jurisdictions in 9 states that have adopted building electrification policies since 2019. Last fall, California approved statewide code updates for electrification, making efficient electric heat pumps the standard, incentivizing their use in the construction of new homes and apartment buildings, and also for some businesses. Last December, New York City became the largest municipality in the country to require new buildings to use electric appliances such as heat pumps and induction stoves. Jurisdictions in Washington that have passed measures to support the transition to clean electric buildings include Seattle, Shoreline, Bellingham, Tacoma and Olympia.

A climate and health imperative

Taking action to transition away from methane gas use in buildings is increasingly seen as a critical public health decision. Children have a 42 percent increased risk of developing asthma symptoms if they live in homes with gas stoves. Particulate (PM2.5) pollution from commercial and residential buildings, primarily the result of gas appliances, is responsible for approximately 18,300 early deaths and $205 billion in health impacts per year nationwide. In Washington State, outdoor emissions of nitrogen oxides (NOx) and volatile organic compounds (VOCs) — two of the pollutants associated with burning gas specifically — from commercial buildings cost the state an estimated $110 million in health impact costs. A recent Stanford University study found that gas stoves leak methane even when they’re off, in addition to emitting CO2 and the respiratory health pollutant nitrogen dioxide when in use. With emissions from buildings still the fastest-growing source in Washington, notably the state’s 2021 State Energy Strategy found that electrifying buildings will be the lowest-cost pathway to economy-wide 95% carbon reductions by 2050.

Shift Zero’s mission is to catalyze a just transition to zero carbon buildings for all in Washington State. We do this by advocating for policies and programs that maximize energy efficiency and eliminate emissions from buildings. As an alliance, we convene our members’ technical, policy, and advocacy expertise to identify solutions that can scale up to meet the urgency of the climate crisis. Collectively, we educate decisionmakers about how proven design approaches and building technologies can be leveraged to create affordable access to high-performance, resilient buildings. www.shiftzero.org