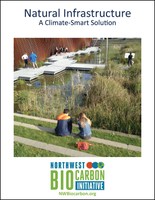 Take a look at some images and quotes from the day: 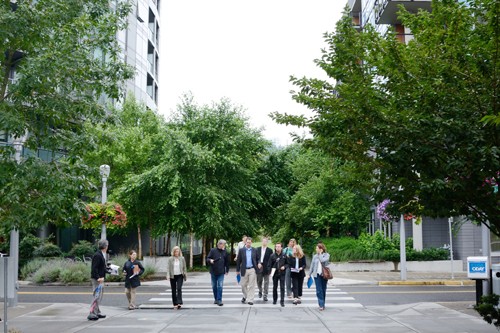 Heading east from Elizabeth Caruthers Park to the Willamette River, it was amazing to note the difference in noise as we passed under the tree canopy. Just a couple hundred yards away from the I-5 / I-405 interchange and we heard nothing but the birds in the trees. Talk about co-benefits! 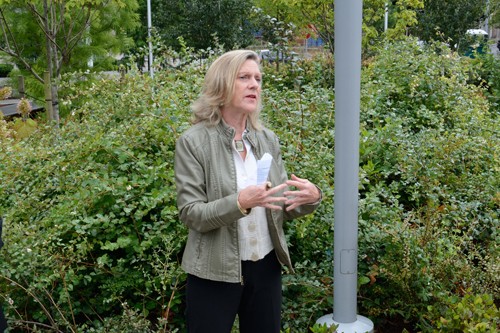 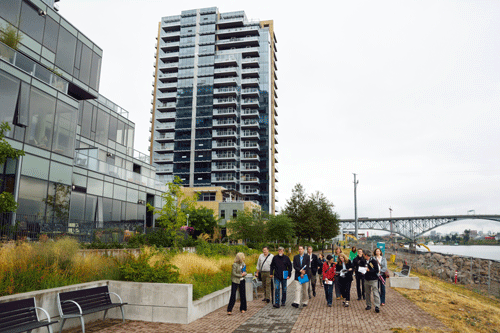 Along the waterfront we were able to view current riparian restoration efforts, permeable surface walkways, and views of Ross Island Natural Area and Oaks Bottom Wildlife Refuge across the Willamette.

"Everything we do today is more connected: people, economies, communication. Why aren't we looking at the environment that way?" asked Bobby Cochran, Executive Director for the Willamette Partnership. "Building up our natural infrastructure – from farms to floodplains to green streets – cleans our water, stores carbon, increases local food production, and ultimately makes our communities healthier and happier."

We were treated to the beautiful views from one of the upper floors of the Mirabella (photo at top of page), the nation’s first LEED-Platinum certified retirement community. Ecoroofs and rooftop gardens abound in this neighborhood. 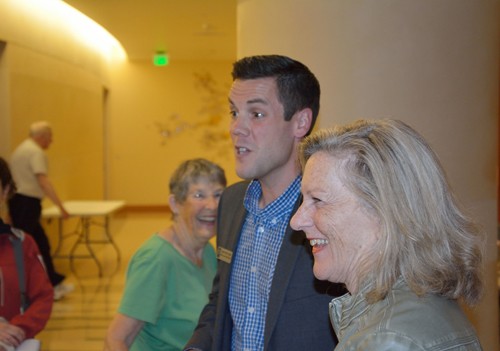 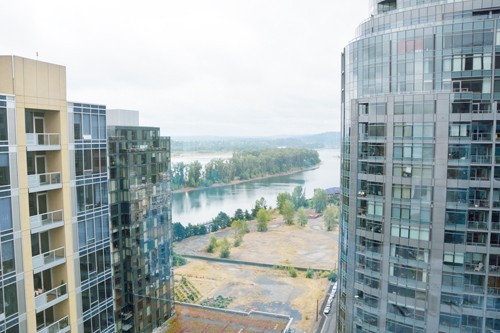 Hardtack Island in the distance, from the Mirabella. 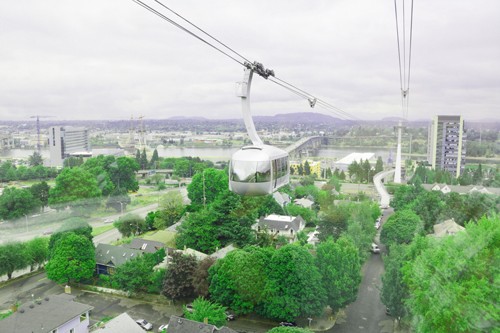 A ride on the Portland Aerial Tram (station adjacent to Elizabeth Caruthers Park) provided even broader views of Portland's tree canopy and other natural infrastructure features.

Eileen V. Quigley is Principal of Clean Energy Transition, which promotes strategies to achieve deep decarbonization and accelerate the transition from fossil fuel to clean energy. Eileen co-authored Powering the New Energy Future from the Ground Up: Priorities in City-Led Energy Innovation, a report on 34 American cities with fewer than 250,000 residents that are reducing their dependence upon fossil fuels for energy. She also co-authored Natural Infrastructure: A Climate-Smart Solution, a report on the role that natural infrastructure plays in reducing greenhouse gas emissions, removing carbon pollution, and building resilience to impacts of climate change. In May 2015, Eileen was asked by the Konrad Adenauer Stiftung foundation to deliver a paper and presentation, Revolution Required: Meeting Current and Future Energy Challenges, at Kühne Logistics Universität in Hamburg, Germany for the City of Tomorrow Series. She currently serves on the board of Stockholm Environment Institute-US and the advisory board of the Clean Energy Institute at the University of Washington.

Eileen received her Master of Science in Journalism from Columbia University and her Bachelor of Arts in Literature from Yale University. She tweets @evquigley.