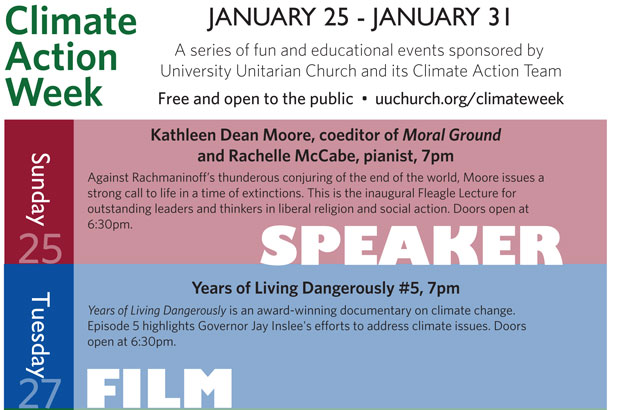 University Unitarian Church and its Climate Action Team present a series of events focused on climate change January 25-31. These events are free of charge and open to the public. All events are at the church.

The events are as follows:

Download the flyer or read on for additional details.

University Unitarian Church is delighted to announce the inaugural Robert and Marianne Fleagle Lecture for outstanding leaders and thinkers in liberal religion and social action. The Fleagles were longtime members of the congregation. Dr. Robert Fleagle was an esteemed professor in the Department of Atmospheric Sciences at the University of Washington, and so it is appropriate that the inaugural lecture focuses on climate change:Rage, Rage, Against the Dying: Global Warming, Extinction, and the Call to Life, featuring Dr. Kathleen Dean Moore, Distinguished Professor Emerita of Philosophy and Rachelle McCabe, Professor of Music, both at Oregon State University. In this duet of music and words, concert pianist Rachelle McCabe will play Rachmaninoff’s “Variations on a Theme from Corelli,” whose outpouring of descending chords gives voice to both the grief and the ferocious hope in the human heart. Writer Kathleen Dean Moore will speak of the call to save Earth’s astonishing lives — a sacred trust, a great and glorious gift, to be honored and protected for all time.

Kathleen Dean Moore is a philosopher, environmental advocate, and award-winning writer whose most recent books are Wild Comfort and Moral Ground: Ethical Actions for a Planet in Peril, which gathers testimony from the world’s moral leaders about our obligations to the future.  She speaks across the country about the moral urgency of stopping a global carbon catastrophe.

Rachelle McCabe enjoys an international career as an artist-teacher and as a solo recitalist and highly respected chamber musician. She has performed extensively in the United States, Canada, Southeast Asia and England. In addition to solo piano recitals in Seattle, Singapore, Malaysia, Washington D.C., Atlanta, Detroit, Portland and Cambridge (UK), she has been featured on NPR’s “Performance Today,” the CBC, and PBS television.

Years of Living Dangerously is a nine-part television series on climate change that won an Emmy award. If you missed this series, this is your chance to watch the episode featuring our governor.  In this episode, Olivia Munn discusses ocean acidification and proposed west coast coal export terminals and profiles climate-conscious Governor Jay Inslee of Washington state; “We’re not going to wait until the last person in Washington understands physics and chemistry in order to confront climate change.” New York Timescolumnist Mark Bittman probes New Jersey Governor Chris Christie on the topic of human-made climate change during the rebuilding of his state’s coastline in the aftermath of super storm Sandy. Christie once acknowledged the scientific consensus on climate change but steadfastly refused to discuss it during the rush to rebuild.  Christie pulled New Jersey out of the Regional Greenhouse Gas Initiative after meeting with the Koch brothers.

After the movie, there will be an opportunity for discussion about the issue of climate change.

Yoram Bauman is a PhD economist who makes a living as “the world’s first and only stand-up economist.” He is a co-author of The Cartoon Introduction to Climate Change and the 1998 book Tax Shift, which helped inspire the successful revenue-neutral carbon tax in British Columbia. He is also a leader of the CarbonWA.org campaign to bring a revenue-neutral carbon tax to Washington state and beyond.

Yoram attended Reed College and earned a Ph.D. in economics  at the University of Washington in 2003. He lives in Seattle with his wife Laura. “In graduate school I blew off some steam by writing a parody of the ‘ten principles of economics’ in Greg Mankiw’s best-selling textbook, and in 2003 my parody got published in a science humor journal called the Annals of Improbable Research. They run a humor session every year at the AAAS annual meeting, and in 2004 it happened to be in Seattle so they invited me to present my paper. I had so much fun I started going to open-mic nights at the Comedy Underground, and the rest is history.”

Yoram says his goals are to spread joy to the world through economics comedy; to reform economics education; and to implement carbon pricing, preferably through a revenue-neutral tax shift involving lower taxes on things we like (working, saving, investing) and higher taxes on things we don’t like (e.g., carbon).

“I spend a lot of free time working on carbon taxes, especially revenue-neutral carbon taxes (where the revenue from the carbon tax goes to reduce existing taxes). I even talk about it in my comedy routines, and to some extent I do comedy so that I can talk to people about carbon pricing. So… why? Three reasons. One, climate change has the potential to be a huge issue this century: I’m not convinced that a climate catastrophe is looming, but I think the threat of a climate catastrophe should be taken seriously. Two, economics has a lot to add to this discussion: the theory of externalities, cost-benefit analysis, economic instruments like carbon taxes and cap-and-trade… all of these and more make economics a crucial part of the discussion; people who wonder what economists have to say about environmental issues couldn’t be more wrong. Three, economists more or less agree on what should be done. This is very different than, say, many questions in macroeconomics, which everyone agrees are important but which elicit wildly different opinions from experts. In contrast, just about all economists think that putting a price on carbon (with a carbon tax or cap-and-trade system, but especially with a revenue-neutral carbon tax) is necessary if not sufficient in tackling climate change. Paul Krugman, Greg Mankiw, arguably even Milton Friedman, the list goes on.”

Sharon began combining music and environmental education in 1993.  She is the executive director of Irthlingz Arts-Based Environmental Education whose mission is to engage, educate and inspire people to become stewards of the Earth.  Sharon has sung for U.N. World Environment Day and for 2004 Nobel Peace Prize winner Wangari Maathai.

This one-woman musical show brings to life the stories of real people affected by climate change and working to solve the climate crisis. Their stories are told in their own words and through original songs that complement the stories.  The show takes audiences on a journey around the world and into ourselves and our society. It provides both catharsis and inspiration to help us reach the needed emissions targets in the next few years. The purpose of the show is to bring people in the U.S. and around the world closer together and inspire people to take action on climate change in their own lives. By presenting stories of real people and highlighting the human element in dealing with the very real challenge of climate change, it becomes clear how much we are connected to each other and to this challenge. It will be a serious show but also uplifting and inspiring with a healthy dose of humor.

The show will run 60-70 minutes. After the show, there will be an opportunity for feedback and discussion about the show and the issue of climate change.

Come explore resources and vendors that will help you understand and take action against climate change. Test drive a Tesla or electric bike, learn about solar panels, and calculate your carbon footprint. Explore ways to reduce your footprint and help encourage action by individuals, the congregation, and the community to reduce greenhouse gas emissions.