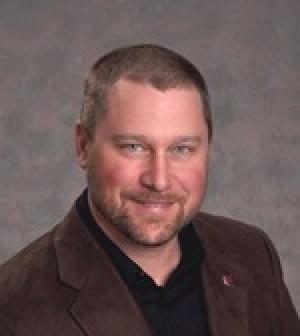 Chad Kruger is the Director of the Washington State University Center for Sustaining Agriculture & Natural Resources (CSANR), overseeing CSANR research and extension efforts ranging from organic farming to climate change to small farms. Since 2004 he has led CSANR’s award winning Climate Friendly FarmingTM Project which focuses on evaluating the carbon footprint of agriculture, developing greenhouse gas mitigation technology, climate change impact assessment, and developing renewable fuels and products from biomass. He received a B.A. in Philosophy and History (1997) and an Academic Certificate in Ecointensive Agriculture Technologies (1998) from Northwest College in Kirkland, Washington, and he completed an M.S. (2003) in Land Resources from the Gaylord Nelson Institute for Environmental Studies at the University of Wisconsin – Madison. He was a member of the 2007/2008 Washington State Climate Action Team, co-chairing the Agriculture Sector Carbon Market Workgroup. He was a member of the 2010 Washington State Climate Change Working Lands Technical Advisory Group and a member of the Washington State Energy Strategy Technical Experts Panel. He is currently a technical advisor to the Northwest Biocarbon Initiative and a WSU Earth, Ecosystem and Society Fellow.