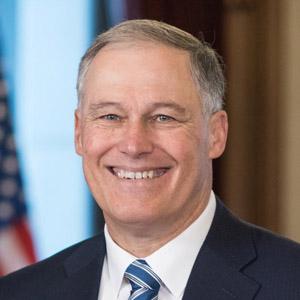 Governor Jay Inslee is a fifth-generation Washingtonian who grew up in the Seattle area. His father, Frank, was a high school teacher and coach. His mother worked as a sales clerk at Sears & Roebuck. Jay worked his way through college and graduated from the University of Washington with a degree in economics before earning his law degree at Willamette University. He and his wife, Trudi, then moved to Selah where Jay worked as a prosecutor and they raised their three sons.

Jay first became involved in public service in 1985 when he and Trudi helped lead the effort to build a new public high school in Selah. Motivated to fight against proposed funding cuts for rural schools, Jay went on to represent the 14th Legislative District in the state House of Representatives. He continued serving communities in the Yakima Valley when he was elected to Congress in 1992. The Inslees later moved back to the Puget Sound area where Jay was elected to Congress in 1998, serving until 2012.

Jay and Trudi are proud grandparents of three. Besides writing and illustrating books for his grandchildren and sketching scenes from around Washington, Jay is an avid cyclist and charter member of Hoopaholics.

During his time in Congress, Jay became known as a forward-thinking leader, especially on issues of clean energy and the environment. He co-wrote a book, "Apollo's Fire: Igniting America's Clean-Energy Economy," about the job-creating potential of the clean tech industry. As governor, Jay's top priority is growing Washington's innovative industries such as clean energy, IT and life sciences, and strengthening existing industries such as aerospace, agriculture, maritime and military. Since 2013, Washington has experienced a seven-year low in unemployment rates, record exports and notable growth in Washington’s key industries.