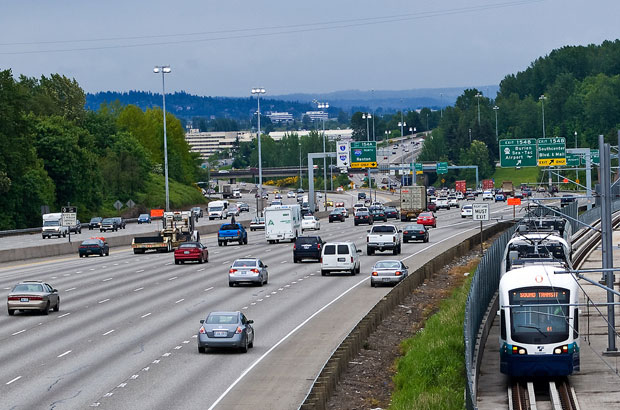 Washington State’s efforts to enact a statewide clean fuel standard (HB 1110) and join surrounding jurisdictions on the West Coast, by requiring a 20% reduction in the carbon intensity of fuels by deploying clean electric vehicles and sustainably-produced biofuels, passed out of the Senate Energy, Environment & Technology committee today.

The Senate Transportation Committee now takes up the bill, where it has been met with some senators’ skepticism in previous years. Notably, Tuesday’s committee vote caps a week of increasing pressure statewide and in Olympia to take strong climate action and address Washington’s transportation emissions by passing clean fuels. A recent poll by Elway and Crosscut showed strong public support across the state at 66% in favor.

The Senate Transportation committee will receive a bill that reflects a request by the majority of House Democrats to align the deployment of the Clean Fuel Standard with much-needed transportation funding, as well as amendments sought by environmental justice groups. The striker, introduced by Sen. Reuven Carlyle (LD-36), makes the program’s carbon reduction requirements contingent on passing a transportation funding package. This provision would give fuel producers ample time to transition to cleaner fuels, including increased production by locally-produced sustainable biofuels and investments in electric vehicle infrastructure. Equity amendments prioritize funding to highly impacted communities and allow the Department of Ecology to assess fuel producers’ labor, social, and environmental impacts.

There has been strong support throughout its multi-year campaign to pass a Clean Fuel Standard, with the House of Representatives passing HB 1110 also in 2019. Recent efforts by the Puget Sound Clean Air Agency to enact a regional clean fuel standard attracted wide support within the Agency’s four-county jurisdiction with over 6,000 public comments submitted in support of a strong rule. Additionally, recent polling indicated broad statewide support for clean fuels with majority support across income levels, both rural and urban areas, and notably among drivers who commute alone. The American Lung Association, the Washington Academy of Family Physicians, and the Washington State Medical Association see a Clean Fuel Standard as one of the most important ways to improve public health by decreasing sources of air pollution. Beyond public health organizations, the bill has support from a broad and diverse group, including local elected officials, the Port of Seattle, Alaska Airlines, automobile manufacturers, waste haulers, clean energy businesses, and science and medical professionals.   It is one of four priorities of the Environmental Priorities Coalition this year as well.

The committee also approved HB 2311, a bill to update Washington’s Climate Pollution Limits. HB 2311 brings state greenhouse gas emissions reduction targets into alignment with current science and sets us on a path to reach net-zero emissions by 2050.  It also incorporates the carbon-sequestration power of our natural and working forests, shorelines and soils into our plan for getting there.  Passage of a Clean Fuel Standard and updated Climate Pollution Limits are two of the Environmental Priorities Coalition’s top priorities for the 2020 legislative session.

A Clean Fuel Standard requires oil producers and refiners to reduce the carbon intensity of gasoline and diesel or invest in cleaner fuels, providing consumers with cleaner-burning transportation fuels such as electricity. Washingtonians spend over $9 billion annually on mostly imported gasoline and diesel, while many locally-produced clean fuels are shipped to other markets with working Clean Fuel Standard policies in place, including Oregon, California, and British Columbia. Requiring cleaner fuels and electricity for transportation is the baseline for creating pathways toward cleaner transportation options, such as adding electric vehicle infrastructure, exploring electric vehicle car sharing programs, and promoting investments in renewable clean biodiesel and renewable natural gas.

The Environmental Priorities Coalition is a network of over twenty leading environmental groups in Washington State that influence policy at the state level. For over a decade, the Coalition has worked on joint priority issues during the legislative session to help focus community resources and achieve our shared goals.

Our climate is at an inflection point. Can we count on your support?
A Win for transit riders, disability community, clean air and less congestion
Facebook: stop hate for profit
Climate Leaders Live!