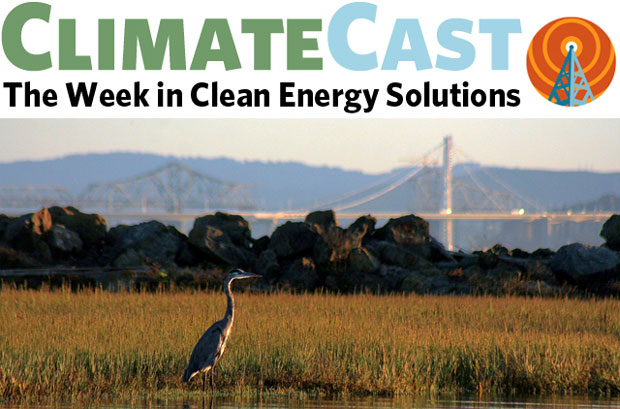 Renewables will account for over two-thirds of new generation built worldwide between now and 2040, according to a new report from Bloomberg New Energy Finance. Clean energy’s dominance will accelerate around 2027, BNEF predicts, when its new facilities become cheaper than the operating cost alone of fossil plants. The dropping prices of solar, wind, and other renewables will forestall a resurgence of fossil gas, particularly as wind farms increase their capacity factor, producing power for more hours per year. Renewable generation is on track to exceed fossil gas in the US by 2031 as clean power prices fall—a trend that is already making gas plants in California unprofitable. But current trends alone do not eliminate fossil fuels fast enough: carbon pollution would peak in the 2020s but decline little because of growing coal use in India and Southeast Asia, unless clean power attracts another $5.3 trillion in global investment beyond the $7.8 trillion BNEF already foresees.

India and the US agreed to accelerate key steps toward climate action when the two countries’ leaders met last week in Washington, DC. President Obama and Prime Minister Narendra Modi vowed to ratify the Paris climate accord this year; to develop a joint proposal for phasing out hydrofluorocarbons (HFCs), a potent greenhouse gas used in air-conditioning; and to finalize Westinghouse’s sale of six new nuclear power plants to India, surmounting regional opposition and complications stemming from India’s strict liability laws. They also committed $30 million each in public financing to programs aimed at catalyzing 1 million solar homes and $1 billion in village-scale clean energy projects, though one local analyst questioned whether that much money could be spent effectively.

US carbon pollution from transportation exceeded emissions from electric generation last year for the first time since 1979, thanks to a cleaner US electric grid and the current slump in gasoline prices. Globally, carbon pollution grew last year by just 0.1 percent, as a similar drop in coal consumption was balanced by increased use of petroleum, according to data compiled by oil giant BP. That upward pressure on oil demand underscores the importance of renewable liquid fuels for sectors not suitable for electrification; progress is being made in turning solar energy into both hydrogen and hydrocarbons.

The San Francisco Bay Area last week became the first metropolis to tax itself to adapt to a changed climate. Voters approved a $12-per-parcel annual fee to build levees and restore marshlands that protect shorelines from storm surges; environmental groups and business interests with low-lying property united to bankroll the measure. In the Arctic, sea ice reached a new low for May, while a study documented erratic jet stream patterns linked to last summer’s spike in glacial melting in Greenland. Climatologists calculated that global warming made this month’s Parisian flooding more likely—a kind of conclusion likely to garner acceptance in France but rejection in Texas, which is also reeling from bouts of heavy rain and inundation.

Distributed storage is coming; utilities to adapt or shrivel

Over 18 MW of grid-interactive power storage came on line in the first quarter of the year, more than double the same period last year. Residential installations spread from California and Hawaii to other states, such as Vermont and Kentucky. In New York, utility ConEd is partnering with Sunpower and Sunverge to deploy a $15 million virtual power plant on 300 Brooklyn homes, each of which will have a solar array and a 6-kW battery which ConEd will manage remotely. Strict limits on climate pollution will ultimately require either storage or adjustable-output nuclear plants, says a new paper in Applied Energy. This brave new world of distributed generation and storage means utilities will lose their monopoly on electricity services and will have to create incentives for their customers to remain connected to the grid, according to two Berkeley researchers.

Could coal be shut down by eminent domain?

A novel proposal began circulating this month that the federal government buy out the coal industry, shut it down, and retrain its workforce. The idea might co-opt some of the opposition and reduce coal-based emissions regardless of the ruling in the legal challenge to EPA’s Clean Power Plan, but wouldn’t address the need to invest in replacement power. Workers are already making the transition on an ad hoc basis, with West Virginia coal miners enrolling in retraining programs, and some Texas oil workers turning to the solar industry, which they say offers lower pay but is less stressful .

In brief: one home is an island

As the Brazos River jumped its banks last week, one Texas man protected his home with a portable coffer dam, a plastic tube 30 inches tall that he deployed around his house and filled with water. The $8,300 cost isn’t a bad investment—as long as the floodwaters remain below two and a half feet deep.

Image: A great blue heron in the marshes of San Francisco Bay. Photo by TJ Gehling, via Flickr.