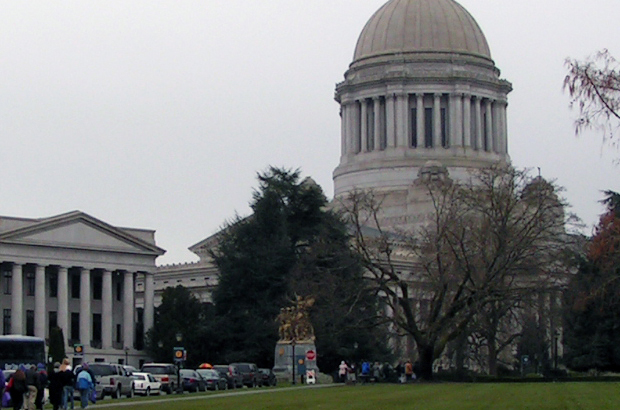 With less than three weeks remaining in Washington’s legislative session this year, lawmakers are continuing to consider a number of bills promoting clean energy and protecting our climate. Opponents of climate action, however,  have  defeated a number of other proposals. Here’s a rundown of where things stand:

Clean Fuel Standard: The most meaningful and significant climate policy the legislature is considering also provides a significant contribution to air quality and public health. That’s why it’s supported by a range of healthcare advocates—including the American Lung Association, the Washington State Medical Association, the Washington State Nurses Association, the Washington Academy of Family Physicians, and others—along with a range of environmental, business, local government and other stakeholders. The policy would reduce pollution from transportation fuels 20% by 2035 by deploying electric cars, trucks and buses, along with sustainably produced biofuels. The House approved the measure with 52 votes in favor, and it is currently under consideration by the State Senate.

Clean Air Act regulatory authority: The Washington Supreme Court recently ruled that the Department of Ecology lacks the authority to regulate indirect emissions, preventing the state from holding fossil fuel producers and sellers like BP, Shell, Puget Sound Energy, and others accountable for the pollution they’re responsible for. Governor Inslee has introduced legislation that would restore this ability. Not being able to regulate these emissions is a huge problem for our state;  the  sources of pollution excluded by the Supreme Court are responsible for the bulk of our greenhouse gas emissions, as well as being the largest sources of three dangerous air pollutants: carbon monoxide, NOx, and volatile organic compounds. Both versions of this bill have passed their policy committees, and while neither the House nor the Senate have approved the legislation, it remains under consideration.

Gas Pipeline Leakage Prevention: Washington’s Department of Ecology currently estimates that gas pipelines leak a whopping 850,000 tons of greenhouse gases into our atmosphere, while customers continue paying for natural gas they never received. While some leaks are an inevitable result of system maintenance and others are the fault of third parties, our gas companies are currently not required to disclose the volume or causes of leaks in their pipeline. Representative Sharon Shewmake has introduced legislation requiring greater disclosure of these leaks, and improving the regulatory environment around repairing them. While gas companies at first opposed this bill, all but Avista now support it, with the addition of a few amendments that still preserve the legislation’s purpose. The bill cleared the House with 87 votes in favor, and is now under consideration by the Senate. We’re optimistic that this bill can make it to the Governor’s desk this year.

Climate limits: In 2008, Washington state adopted our first, deeply insufficient targets for carbon reduction. Those limits were already out of date when they were approved by the legislature, and we’re working this year to update them to properly reflect the science as we know it now. The new targets will call for Washington to reduce pollution by 95% by 2050 while achieving net-zero emissions at the same time. While these targets are non-binding, it’s important to reflect the updated science in our laws.

Home Heating Electrification: Washington’s shareholder-owned electric utilities currently provide incentives to their customers to purchase new, efficient electric heating appliances like heat pumps and water heaters. These incentives help customers reduce their energy spending along with their greenhouse gas emissions, while also improving the indoor air quality in their homes. Freshman Representative Alex Ramel introduced a bill to extend the authority to provide these incentives to public utilities, so their customers can receive the same benefits as their neighbors. Lobbyists for Puget Sound Energy, Cascade Natural Gas, Avista, and NW Natural saw a threat to their business and went all out to kill this bill, getting legislative opponents to introduce 24 specious amendments to block these incentives (a few claimed to defend people’s right to have propane grills— which of course are not regulated at all by this policy). Unfortunately the House of Representatives ran out of time, and the bill died.

This is beyond objectionable. Puget Sound Energy has acknowledged that all-electric homes can save their customers money— yet they did everything possible to kill this bill. There is also extensive research documenting the serious human health risks associated with using this fossil fuel indoors; for example, 12% of childhood asthma cases are attributable to gas ranges. Even when gas appliances work correctly, they leak carbon monoxide, formaldehyde, and NOx into our homes. So rather than allowing their customers to partner with utilities to make the best choice for their families, Washington’s gas companies chose to protect their bottom line. We’ll be back next year.

Transportation for All metrics: For years Washington has designed new road investment proposals by assembling member-supported projects and raising huge sums of money to fund them. The result is that our state has severely underinvested in preservation and maintenance of existing road infrastructure, while also short-shrifting comprehensive transportation and mobility approaches including transit and non-motorized infrastructure. In order to change that, Senator Rebecca Saldaña and Representative Shewmake introduced bills that would restore impartial evaluation to proposed projects to help inform legislative deliberations. While the bills didn’t make it through committee votes, Climate Solutions and partners remain committed to advocating for a balanced, climate-smart, and progressive transportation funding package next year.

There’s not much time left in this session, but there’s still time for you to raise your voice for our climate! Call your senator and demand action—use the Legislative Hotline at 1-800-562-6000. Tell them that they must pass either Clean Fuels or the Clean Air Act authority expansion, along with the climate limits bill and gas pipeline leak prevention. The climate crisis is urgent, and our legislators should keep working until they adopt major climate legislation this year.