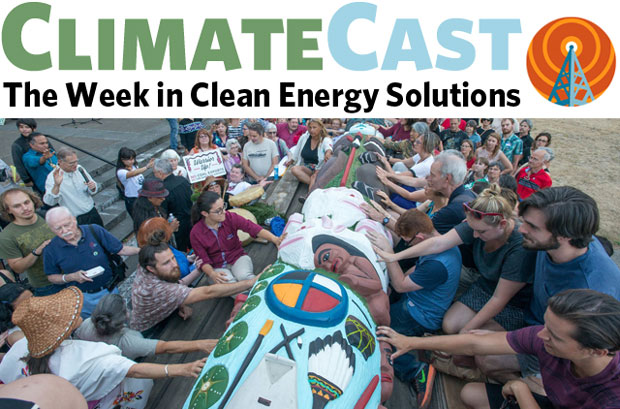 California will cut its climate pollution 40 percent below 1990 levels, according to a mandate for 2030 passed last week in the California legislature. Gov. Jerry Brown promised to sign the bill, which puts the Golden State on par with the European Union in having the stiffest climate goals of any major world economy. The legislation tells the California Air Resources Board (CARB) to set the specific policies that will achieve this target, which is a heavy lift, say analysts, requiring a comprehensive array of measures. In a separate bill, the legislature also took more oversight of CARB and steered it toward emissions cuts in urban areas. The package’s passage was a defeat for Big Oil, which stopped similar legislation last year. The bills did not codify the state’s cap-and-trade system, which is being challenged in court on grounds that it is a tax passed without the requisite two-thirds supermajority; meanwhile, California legislators by a 3-2 margin in each house passed a joint resolution calling on Congress to impose a national carbon tax and distribute the proceeds to low- and middle-income taxpayers.

EV is to internal combustion as mobile is to landline

Electric vehicles will transform the automotive sector as thoroughly as mobile phones changed telecommunications, says a new report from Bloomberg New Energy Finance. Cars are the “keystone species” of an ecosystem of factories and service providers, which will be upended by autos that need neither fuel injectors, radiators, nor oil changes, likely stranding billions of dollars of assets tied up in engine manufacturing. The Wall Street Journal, too, sees the EV revolution as imminent, pointing both to EVs’ increasing range and their growing network of charging stations. Two Tesla models can now be outfitted with 100-kWh batteries that boost their range to 315 miles, the firm announced, and Pacific Gas & Electric wants to build 7,600 charging stations in its northern California territory, a move backed by environmental groups but greeted skeptically by consumer advocates.

A federal judge last week postponed his ruling on a plea by the Standing Rock Sioux tribe to halt a $3.7 billion oil pipeline from the Bakken oil fields to Illinois. The pipeline has been the focus of a growing intertribal protest encampment since April, which even drew support from the Lakota’s long-time foes, the Crow. Members of the Lummi tribe, whose opposition recently halted a coal export terminal near Bellingham, are en route with a 22-foot totem pole on tour against fossil fuel development, and were scheduled to arrive at Standing Rock Monday night. On Haida Gwaii, two hereditary chiefs were stripped of their titles at a potlatch on suspicion they had engaged in secret negotiations to support the Northern Gateway oil pipeline. Two environmental groups sued to block drilling on 380,000 acres of federal land leased in the last two years, and rail shipment of oil through Washington just became a little more complicated, as recipients of oil trains will have to notify emergency responders before tanker cars roll through the state.

Even as prices of solar power continue to drop, falling 5 to 12 percent in 2015, the sector is bracing for a hiccup in its growth pattern in the coming year. An analysis of help-wanted ads suggests solar firms are hiring fewer sales staff, and solar majors SolarCity, First Solar, and SunPower all revised their current year projections downward. Upstream, an 18 percent increase in global PV-making capacity may lead to a glut of panels in coming months, driving down prices but making it hard for manufacturers to hang on. The federal Energy Information Administration predicts 5.3 GW of solar PV will be installed in the US in 2017, compared with 8 GW it expects this year.

Rising seas could flood nearly 2 million U.S. homes, according to an analysis by the real estate data company Zillow, displacing millions of people and destroying hundreds of billions of dollars in property. Global warming also affects the power grid: generating stations and power lines are vulnerable to inundating tides, and warming waters will decrease electricity production at thermal power plants and hydroelectric dams—just as heat waves spike power demand to meet higher air conditioning loads. One ray of hope: humans are becoming more efficient in using natural resources; nevertheless, nearly three-quarters of the planet is under significant pressure from human activity, according to a new analysis of satellite data.

Battery facilities won nearly all the bidding this summer to keep the British power grid stable, with demand reduction and generators coming in a distant second and third. Their success stands in contrast to the difficulty facing new battery chemistry, which has had trouble attracting the capital to commercialize projects proven only at the demonstration scale. Other technologies are being tested, including a system of deep-sea concrete spheres that uses the pressure of the water column to turn each chamber into a pumped-hydro generator. These new technologies may prove quite significant given the difficulties that face another much-discussed idea—using old EV batteries for grid-connected electricity storage—and the need in California alone for at least another 15 GW of storage capacity to meet renewable power goals.

Unlike 2012, when President Obama and Gov. Mitt Romney backed an “all of the above” energy policy, or 2008, when then-Sen. Obama and Sen. McCain both voiced support for cap-and-trade, this year offers a stark contrast between the two major-party candidates. The Associated Press compares their positions concisely, while Utility Dive delves into the details, including the implications for the Clean Power Plan, fossil infrastructure development, and nuclear regulation. Secretary Clinton’s plan to help Appalachia transition away from a coal-dependent economy faces a skeptical reception from locals, while former Vice-President Al Gore draws on his 2000 experience to urge citizens not to cast their vote for third-party candidates.