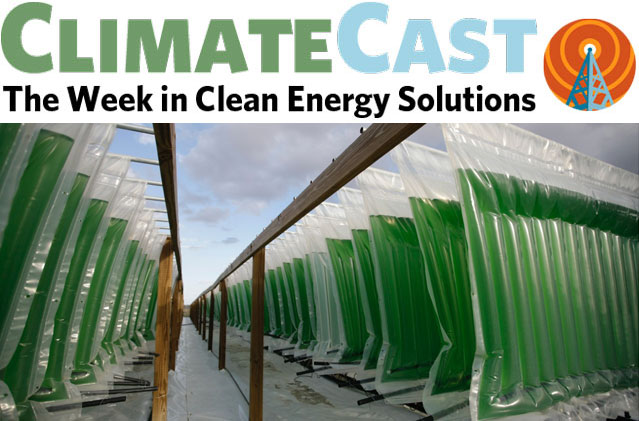 A new U.N. study fills the gap between global climate targets and the messy business of accomplishing them, according to a draft released last week. The Deep Decarbonization Pathways project examines 15 countries responsible for 70 percent of world carbon emissions and maps a customized energy portfolio for each, featuring a shift to electrified transportation and low-carbon electricity, increased efficiency, and reduced deforestation. The aim—keeping the Earth from warming by more than 2 degrees C—is difficult but feasible, the authors conclude. The American team devised four pathways for the United States, the greenest of which is 75 percent renewable energy.

Rooftop solar wins in Iowa and makes a deal in Massachusetts

Iowa solar firms won a key victory last week in the latest skirmish over net metering, which credits rooftop solar customers with the full retail price of the electricity they generate. The Iowa Supreme Court ruled that selling solar power doesn’t turn leasing companies into regulated utilities, saving them from choking on red tape. In Massachusetts, utilities and solar advocates are backing a compromise bill that will allow more net metering installations, while also charging customers to cover their use of the utility grid. These conflicts are just a warm-up for the fight over battery-connected solar power, which threatens utilities’ traditional business model.

Solar entrepreneurs are bringing electricity to the Indian countryside, where power outages are so common that being on the grid is no guarantee of a reliable electric supply. Projects include solar-powered LED lighting prepaid by cell phone a few rupees at a time, and village-scale arrays to charge mobile phones and lanterns, cutting lighting costs in half compared with kerosene. These firms undercut the false choice between fossil-fueled development and poverty, hyped by the likes of Bjorn Lomborg. Meanwhile, the new Indian government proposed backing solar irrigation pumps and utility-scale solar, funded in part with a doubling of the tax on coal.

Dancing on the horns of the carbon dioxide-methane dilemma

Analysts exchanged salvoes last week over the trade-off between reducing carbon pollution and increasing emissions of methane, a stronger but shorter-lived greenhouse gas, as a result of substituting natural gas for carbon-intensive coal. One climate scientist said cutting carbon should be the priority, comparing methane pollution to a hangover and carbon dioxide to lead poisoning; Climate Progress’s Joe Romm scoffed that humanity ought to be able to tackle both issues at once. The stakes were heightened by new research showing high risks of methane leakage from Pennsylvania’s natural gas wells, and satellite data demonstrating that U.S. livestock emit more methane than previously thought—a source that would be unaffected by energy policy.

Oil and gas companies have sunk trillions of dollars into investments that depend on high energy prices and unrestricted fossil-fuel consumption, say financial analysts who warn of a “bubble” in oil and gas exploration. Fossil fuels are absorbing a record-breaking 20 percent of U.S. private investment, and more than a trillion dollars have been committed for the next decade to oil projects around the world that are economical only above $95 per barrel. The Carbon Tracker Initiative took special aim at Royal Dutch Shell, challenging $77 billion it plans to invest in developing high-cost oil reserves.

A Florida biofuel company has suffered millions of attempts to break into its computer servers, including thousands from Chinese internet addresses implicated in other cases of industrial espionage. The attacks came to light when the firm’s computer networks slowed down, and administrators discovered an attempt to connect to its videoconferencing camera. The company, Algenol, has garnered investments from the U.S. Department of Energy and India’s Reliance Industries, and claims that it can convert its algae to ethanol, biodiesel, gasoline, and jet fuel for just $1.27 a gallon.

In a climate-changed world, heat waves will cause up to 27,000 additional deaths annually in the United States—but urban trees, white roofs, and more reflective pavement would cut that number by an average of 60 percent, according to new research published in PLoS ONE. This green infrastructure is especially needed in lower-income and minority communities, which tend to be more vulnerable. For a glimpse into the summers of the future, Climate Central developed a compelling interactive map that shows which city’s current summer climate your city would approximate by the year 2100, unless carbon emissions are curbed.

Transit planners in Helsinki are developing a “mobility on demand” system they hope will make it unnecessary to own a car in the city, The Guardian writes. The system will present a variety of options—transit, car-sharing, biking, ride services—to reach a destination. Urbanites would use their smartphones to plan their journey and pay for it. These novel mobility options seem especially relevant in light of new maps from the MIT Media Lab, which show the fastest way to get to destinations in several American cities: Everywhere but Manhattan, cars and bikes win overwhelmingly over transit.

Reclaiming suburbs for walkability: not just a fairy tale

The Washington suburb of Arlington, VA, shows that suburbs can transcend their sprawling roots and redevelop at urban densities, according to a new piece in Salon. Mixed-use “bull’s-eye development” around Metro stations led the shift, which has culminated in a city where fewer than half of commuters make their trips by car. The outcome might offer hope to planners in Phoenix, who have sketched out ways to transform neighborhoods of that sprawling city into walkable oases. Having a hard time picturing it? Images from the Duany Plater-Zyberk planning shop show how the baked concrete jungle could morph into a New Urbanist idyll.