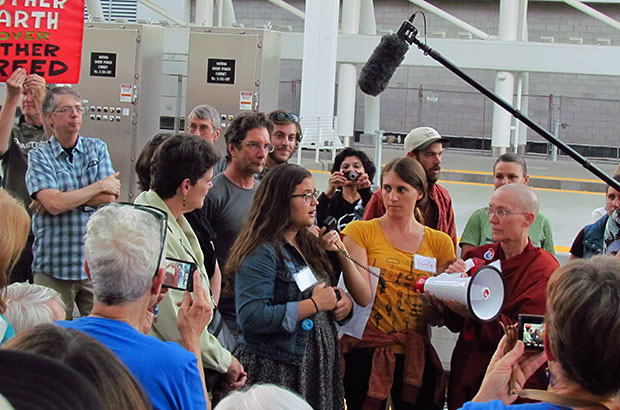 As I boarded the People’s Climate Train that began in Emeryville, California, I had few expectations and was excited to meet a train full of environmentalists. But as we boarded the train and the small-talk began, I was amazed by the diverse backgrounds and perspectives that the riders would bring.  It was not a train full of environmentalists; it was a train full of individuals deeply concerned about equality around the world and how a changing climate exacerbates existing social problems all over the globe.

Meet Bobbie, concerned about her grandchildren having a safe place to live.  Young and future generations will inevitably see more effects from climate change than the current population.  Even if we stopped emitting all fossil fuels today, the globe would continue to warm for years to come.  As emissions continue to rise, the problem becomes increasingly serious and the consequences are catastrophic.

Meet Matt, concerned about homelessness and the effects of climate change on the homeless population. Climate change disproportionately affects high-risk, low-income populations, as they have the least mobility to avoid climate change’s negative effects.  Homelessness will inevitably increase as more and more people’s places of residence become uninhabitable.

Meet Milo, inspired by the Buddhist teachings and classes that examine our relationship with the nature and other individuals. Many religions encourage followers to be good stewards of the Earth. Climate change threatens followers’ ability to be loyal to their beliefs through enlightened stewardship by forcing followers into unfair choices, often pitting economic development against the rights of freedom of religion and the right of nature.

Meet River, spends time analyzing the linkages between climate change and all forms of oppression, with particular attention to the LGBTQ community. Oppression, simply defined, is cruel or unjust treatment, which is essentially what a changing climate does to already oppressed social, ethnic, religious and racial minorities. Penny also draws linkages, emphasizing that humans have taken away the rights of nature - another form of oppression.

Meet Jerry, inspired by early Bill McKibben articles, a minister who trying to incorporate climate change into faith-based teachings because he believes that it is our duty to protect the resources that God has given us.  While many religious leaders deny climate change, Jerry is convinced that God did not put humans on Earth to destroy it.

Meet Connor, grew up spending time outdoors and is concerned humans are losing touch with nature. The rise in population due to the uncontrolled proliferation of capitalism has not only played a major role in causing climate change, but has also disconnected the vast majority of the developed world from nature as it was intended to be experienced.

Meet Raz, concerned about environmental racism, having seen communities suffer negative health effects from alarming rates of pollution. Climate change will further challenge community leaders and policy makers to ensure that racial, ethnic and economic minorities do not share a disproportionate amount of environmental risk, and her goal is to prevent that from happening.

Meet me, Kelly, concerned about all of the above.  There are people of all ages, colors, nationalities and genders that bring unique perspectives to this People’s Climate Train, reinforcing my firm belief that every single person has a reason to care about climate change.  This train clearly demonstrates that some individuals have made the connection between climate change and multiple issues of social justice, but the rest of society needs to wake up.  We need to take the movement beyond typical environmentalism, because this movement is no longer about just the environment - it’s about human rights, and it is our responsibility to protect them.

So let’s go march on September 21st and show the leaders of the world that we need solutions. We need to transition to a clean energy future and take back our power from fossil fuel companies. It is in interest of people and the planet, and it’s simply the right thing to do. 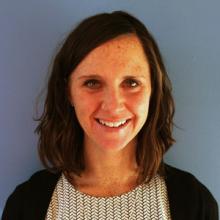 Our plan for 2020: more climate progress in WA
The good, the bad, and the opportunity for climate action in Washington
2019 Session dispatches: week 6 with climate as a top priority
100% clean electricity is within reach, says new research

Kelly helps develop and implement the policy and regulatory agenda to achieve Climate Solutions’ mission to accelerate clean energy solutions to the climate crisis.  She brings years of experience in the utility sector from her previous work at Renewable Northwest, where designed and advocated for policy and regulatory frameworks to expand renewable energy penetration in the Pacific Northwest.  Having previously spent time as a Probation Officer in Indiana and a Volunteer Coordinator in Argentina before a significant career transition, it wasn’t until taking a course on the ethics of climate change that her career path and passions converged into action on climate.  She sees a strong connection between climate change and many of the national and global inequities, and brings her diverse array of experiences and passion for addressing the climate crisis together to inform her policy thinking.

Kelly graduated with an M.P.A. from the University of Washington with certificates in Environmental Management and Climate Science in 2014.  While in school, she held positions with the Climate Impacts Groups, U.S. EPA Region 10, and the PNW Smart Grid Demonstration Project, which provided her with a foundation of climate and energy experience.

In her free time, Kelly enjoys finding new adventurous hikes, wandering around the state on a bike, and sipping on Washington’s finest wines.