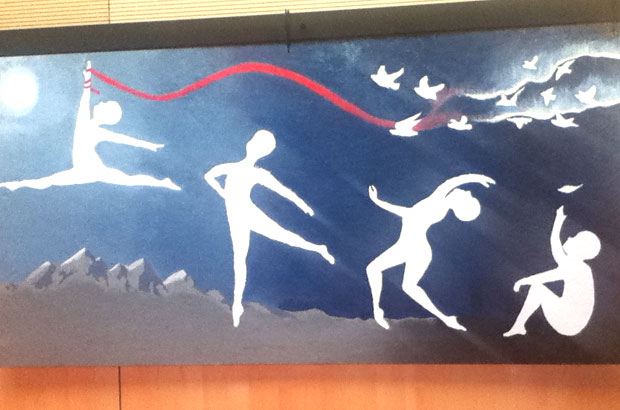 On May 27, 2014, I job shadowed Eileen V. Quigley, Climate Solutions’ Director of Strategic Innovation, for eight hours as part of a required course at my high school, Nathan Hale, called Agents of Change. I now finally understand what it takes to make change.

In order to make change, one has to confront corruption, inform the minority, debunk false claims, have evidence to back up one's claim, be meticulously organized, and never give up—just for starters. However, before someone can change a system, they first have to bring change within themselves.

That is the conclusion that I and my six other classmates—Anthony Nguyen, Andy Lee, Claire Kantner, Rowan Dowell, Tamsin Teague, and Sam Sherer—reached as a result of our job shadowing experiences and that is exactly what we tried to portray in this mural, which we call “Forms Unfolding.”

The mural has four distinct sections. The first section shows a person in a dormant state, desperately wanting to make change within themselves. The birds above spread education, and the feather symbolizes the education they are spreading. The person reaches out his/her hand to gain the proper education to make changes within themselves. The Aurora Borealis above symbolizes how the success of the person in the fourth section shines through the darkness, and inspires the first person to change themselves.

We made silhouettes of people and birds to keep them androgynous and painted them white to signify that they are a combination of all races (the color white is the combination of every color in the visible spectrum). By doing this, we hoped to get the message across that any person can make change in themselves and their community, given proper education and a vision, no matter their race or gender.

The second section portrays the person after being inspired by the Aurora Borealis, and using what s/he learned about how to make change from the bird feather to try to make change within themselves, but not having much success at it (symbolized by the person trying to perform a dance move but having trouble with it). The birds are still there spreading education and the second person is starting to see the success of the fourth person much more clearly.

The ribbon represents the success of the fourth person, and solidifying from Aurora Borealis to a red ribbon. The color of the ribbon, red, stands out from the dark blue background to signify how easy it is notice change once you are the process of making change yourself. The message we were trying to get across with the second stage is that change requires a great deal of education, and that you will run into obstacles to overcome. However, you will still be progressing towards making change, and as you move forward, you can better see the goal you are trying to reach.

The third section shows the person having perfected a relatively easy dance move that is helping him/her get closer to making the desired change. The birds are no longer there, which means that the person has gathered enough knowledge to make change. The mountains in the background gradually grow representing the difficulties overcome to make change. At the fourth stage, the mountain drops down to a plateau indicating that the system has acclimated to the change.

The fourth section is the final stage of change, depicting the person achieving the goal, and finally reaching the same level of success as the person that inspired him/her in the very beginning (symbolized by them holding the ribbon). S/he is also leaping in the air, which is a very hard move to perform, which stands for how change is hard to make, but the results are worth it. This is also creates a chain cycle, since the person is holding the ribbon now, which means they will inspire another person to make change too. The main message of this section is that after one person makes change, they will inspire another and another, creating a positive feedback loop.

The mural gradually fades from dark blue to light blue to signify how the moon portrayed in the fourth section gradually illuminates the scene into a much better place as change is made. We chose the color blue since it symbolizes seeking spiritual fulfillment, which in this case would be “change.”

I chose to do a mural to present my realization about how to make change after learning in my Language Arts class how powerful the Mexican murals were at making statements. I’ve always considered myself artistically challenged, so a mural offered an opportunity to prove myself wrong. Finally, by creating a mural that will hang in my school’s hall, my group and I will leave a part of ourselves at Nathan Hale after we depart.