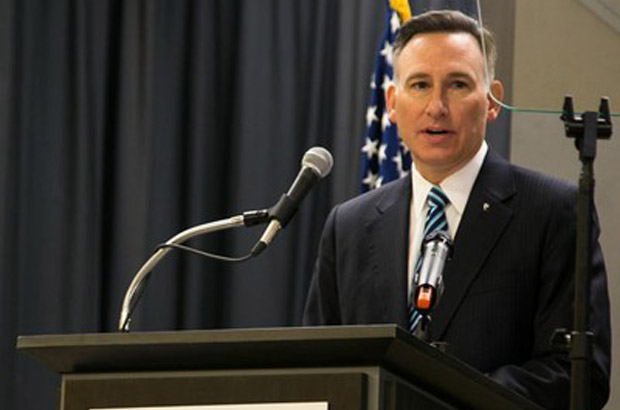 King County Executive Dow Constantine will focus on addressing “the grotesque inequality of means and opportunity in our society, and the destruction of our planet” during his second four-year term in office.

Delivering his State of the County remarks on Monday, February 10, at the White Center Heights Elementary School, Constantine acknowledged that he was signing up the County for an ambitious agenda but, citing the children studying in nearby classrooms, he added that there was no choice but to aim for the future we want.

“Decades from now, when these kids are grown and look back, what will they say of us? Of what we did, or failed to do, about the great generational challenges of our time?” Constantine asked his audience at the school. “Confronting climate change, and building equity in our community – addressing the physical world and the people who live in it – these are inescapable, global responsibilities.”

With a population of 2 million, King County is home to 39 cities, represents a third of the population of Washington State, and is the 13th most populous county in the nation. If King County achieves Constantine’s vision, it could lead the nation in addressing climate change and equity issues.

Constantine ticked off the facts that show the impact of rising temperatures in King County:

In 2012, more than 80% of surveyed streams and rivers in King County exceeded the state temperature standard for protection of salmon habitat.

In the Cascade Range, snowpack decreased by 25% from the 1950s to the 2000s, with significant implications for water supplies and recreation.

Over the last 40 years, all major rivers in King County have shown higher flow and increased flood risk during the fall, and significantly lower flow during the summer.

Puget Sound has risen more than eight inches over the last century, and local waters are becoming more acidic with potentially severe impacts to ocean ecosystems.

“We can no longer wait for international consensus or a dysfunctional Congress,” Constantine observed, stating the obvious. “It’s on us, and we’ve shown that this region can set the pace.”

To address climate change, Constantine is convening two meetings with cities in King County, one Thursday, February 13, 2014, and the second before May, to chart a specific package of joint commitments that will meet state and local climate targets. The New Energy Cities team has been working since last fall with the King County-Cities Climate Collaboration to tee this summit up.

The summit and development of joint commitments to reduce greenhouse gas emissions follows on the heels of the efforts by Constantine and mayors from the cities of Mercer Island, Kirkland, Issaquah, Shoreline, Snoqualmie, Sammamish, Seattle, and Tukwila last December when they issued a joint letter calling for bold state action to reduce greenhouse gas emissions as testimony before Washington State’s Climate Legislative and Executive Workgroup. The letter proposed establishing market-based tools to set a price on climate pollution, coupled with steps to ease the transition for businesses and low-income residents.

Constantine’s other climate initiatives include:

Finally, Constantine expressed his unequivocal commitment to stop the export of coal to Asia. On December 17, King County took a strong stand against coal exports, passing a resolution that expressed deep concern about coal export terminal proposals and called for a broad review of the impacts on Washington and beyond.