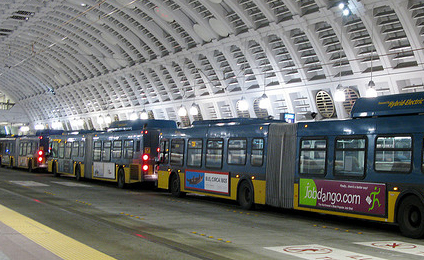 On Earth Day—April 22—King County, WA voters should resoundingly pass Proposition 1 to keep Metro bus service at current levels, and send a strong message of support for our region’s environment, economy, and citizens.

Failure to pass Proposition 1 would mean up to 600,000 fewer transit service hours a year, impacting 80 percent of bus riders. An estimated 30,000 more cars would likely be on our roads, which is bad for our climate as well as our regional economy. Equally important, keeping bus service at current levels ensures that all members of our community (seniors, students, people with disabilities, and working families) have an affordable way to move around the county.

“The most regressive action we can take is cutting our bus system,” Metropolitan King County Council chair Larry Phillips warned in a Seattle Times op-ed. “That will not only harm low-wage workers who depend on Metro to get to their jobs, it will increase traffic congestion, damage our economic competitiveness, diminish mobility options for seniors, youth and people with disabilities, and hurt our environment.”

Proposition 1 will provide dedicated transportation funding to preserve Metro transit service levels by raising sales taxes by 0.1 percent and requiring vehicle owners to pay a $60 annual fee for car tabs ($20 more than what we pay now).

Sixty percent of the revenue would save Metro service long-term, while the other 40 percent would be allocated to cities and the county for road maintenance, which our economy needs to keep people and goods moving. The measure creates a new $1.25 low income bus fare and provides a partial rebate for low income car owners so that those who rely most on Metro do not bear the heaviest burden to maintain it.

A private vehicle driver shifting to transit saves up to 4,800 pounds of CO2 emissions per private vehicle per year.  Metro carries 400,000 riders a weekday, which keeps approximately 175,000 cars (with their associated greenhouse gas emissions) off King County roads every day. In 2011, Metro conducted a survey that found that if public transportation were not available in King County, people would make 62% of their usual transit trips by private automobile.

King County reports that in 2012, public transportation diverted potential driving that spared over 136,000 MTCO2e. Cutting Metro by 16% would put an estimated 30,000 cars back on our roads, primarily during peak times and in busy areas, when the roads are most congested.

We urge King County residents to do the right thing and pass Proposition 1—for our economy, our environment, and all citizens.