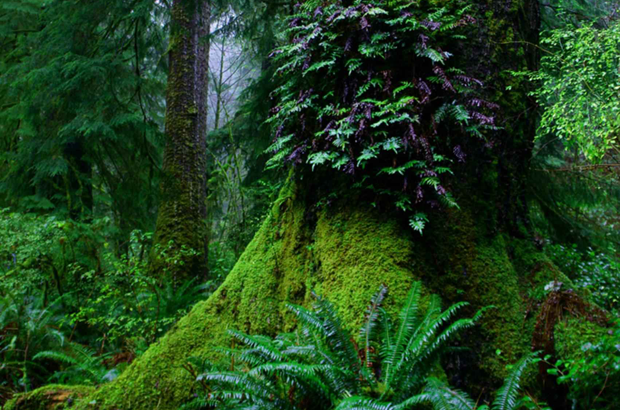 "It’s as if the star players on your favorite sports team were a bunch of 90-year olds."

It turns out that as big trees age, their growth rate doesn’t slow—it increases. While it’s well known that large trees play an important role in sequestering carbon, scientists had thought that when trees reached a certain age, their ability to amass more carbon tapered off. Instead, the USGS study found that large, older trees are serious biocarbon heavyweights.

This discovery has particular relevance to the Pacific Northwest, home to temperate rainforests—the best kind of forest in the world for accumulating atmospheric carbon. From northern California to Alaska, these ancient forests house immense, long-lived trees, which specialize in soaking up carbon and hanging onto it. Due to the high density of large trees in unmanaged Pacific Northwest forests, they store more carbon per acre than any other type of forest in the United States—not only in the trees themselves, but also in the soil, the understory, and the root systems underground.

Getting Better With Age

Of the 403 tree species worldwide examined by the USGS study, 97 percent grew faster as they aged, including Northwest species such as Douglas fir, western hemlock, and western red cedar. The study found that “at the extreme, a single big tree can add the same amount of carbon to the forest within a year as is contained in an entire mid-sized tree,” meaning these large, old trees are the biocarbon MVPs in the forest carbon cycle.

Since this study accounts only for the scale of individual trees, more research is needed to better understand what these fast-growing, older trees mean for carbon sequestration at the stand level. However, given the other important ecosystem services provided by ecologically complex forests with larger trees, these findings provide yet another argument for strategies that allow trees to grow larger.

These strategies enhance the crucial ecosystem services that our forests deliver, from carbon storage, to wildlife habitat, to clean water and healthy rivers that support salmon and prevent downstream flooding.

With carbon dioxide levels in the atmosphere surpassing what is considered the safe upper limit, carbon storage may be the most important life-supporting function Pacific Northwest forests provide. While we must remain laser-focused on curtailing greenhouse gas emissions to stabilize the climate, we must also protect our natural assets that pull carbon pollution out of the atmosphere, especially in light of the recent finding that America’s forest carbon sink is expected to shrink.

Protecting and restoring healthy forests is one of the Northwest Biocarbon Initiative’s key climate solutions. By creating economic and policy tools that foster better forest management practices, we can realize the tremendous potential of our forests to help restore climate stability.