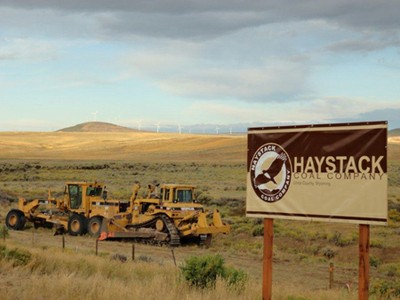 Wyoming's only new coal mine, Kiewit's Haystack Mine in SW Wyoming, halted construction yesterday before shipping any coal. Why should we care about coal mining in Wyoming? Short answer: it is at the heart of the biggest coal mining region in the United States, and by some calculations the world.

The cited reasons for the halt were very soft coal markets and the lack of export capacity on the west coast. "The market is down and we don't have any export capacity" said the Wyoming Mining Association Executive Director, Marion Loomis, quoted in SNL Energy (subs. Required).

The only other new permitted mine in the state, Cloud Peak's Young Creek Mine, has been indefinitely delayed pending construction of export terminals.  Cloud Peak management has explicitly said that they only plan to begin development of this mine and other assets when (and if) the proposed Gateway Pacific and Millenium coal export mega-terminals open for shipments.

The United States Energy Information Administration recently confirmed that nine of the ten largest coal mines in the US are in Wyoming (the other one is just across the border in southern Montana).

Domestic markets look increasingly bleak for coal producers. The flight from coal is being driven by competition from cheap natural gas and the rapidly falling costs of renewable energy and efficiency.  It is also being accelerated by stronger federal and state regulations forcing coal generators to start paying to address some of the overwhelming pollution and health costs that they have been imposing on communities.  A recent study from Duke University’s Nicholas School for the Environment concluded that as much as 65% of the nation’s current fleet of coal fired generating plants may likely be retired in coming years, with no new coal plants getting built.

Is it any surprise then, that coal executives’ yearning eyes are fixed on overseas markets?

Since this fight started brewing in the Northwest on coal exports, we have heard from many self-anointed "Very Serious People" who constantly tell us that our actions don’t matter. They assert that the coal will be mined, shipped and burned, regardless of regional decisions whether to allow these NW terminals to be built.

While not the final one, this mine closure is another nail in the coffin for that myth.

In other words, if the terminals aren't built, the millions of tons of coal and even greater amounts of global warming pollution stay in the ground.

In other words, all our work together matters, and the markets are starting to reflect the fact that we are winning.

In other words, resistance isn't futile.

P.S.  In a delicious irony and showing we can do better, Wyoming’s largest windfarm is located on a ridge overlooking the shuttered Haystack Mine. The project is doing just fine, and the eighty wind turbines are producing clean energy and lots of local jobs and investment.