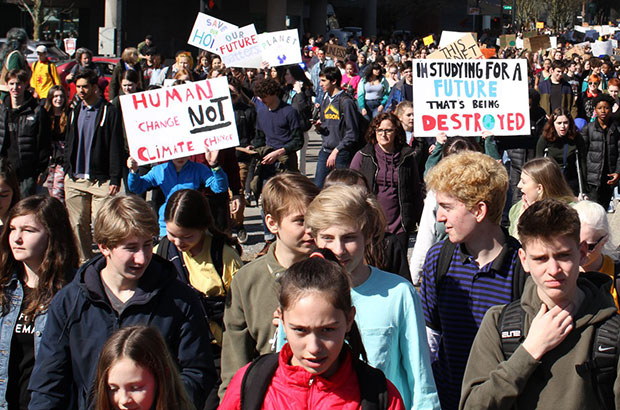 I’m joining the Climate Strike this Friday because it is past time for climate, energy, and justice advocates to have the backs of a new generation of leaders who have the courage, moral clarity, and passion to speak the truth about the Climate Crisis and the need for real solutions to salvage a livable future.  Let’s be clear: I don’t want to “adult-splain” the Climate Strike, or speak for the kids who are organizing this action. My sole purpose is to convince some of my fellow oldsters (I just applied for Medicare) to get out on the streets and have their backs.

The leaders driving the Climate Strike (and the Green New Deal) are very, very young, and are much more diverse than the mostly old, mostly male, and mostly white group that have tried to drive environmental and climate policy for the past decades. The Green New Deal first jumped on the national stage when the 29 year-old dynamo, Representative Alexandria Ocasio-Cortez,  joined a crowd of teenagers and 20-somethings from the Sunrise Movement to demand climate action.

Sunrise is a fresh face in the climate movement, co-founded by a brilliant 25 year-old woman of color, Varshini Prakash. Sunrise sprang seemingly out of nowhere in the past 12 months to take center stage in the debate over climate and clean energy policy.

Pushing all of these leaders is a broader and even younger movement of children and students around the world demanding that we do something to fix the climate crisis. Kids are marching, striking, and even suing the US government for inaction. No one personifies this moment better than Greta Thunberg, the 16 year-old Swedish school girl who has seen her solitary “Climate Strikes” balloon into worldwide events culminating in this month’s action. Thunberg has lectured world leaders at the UN Climate Conference and Davos and was recently nominated for a Nobel Peace Prize.

These kids are rightly impatient. You can practically hear them shouting at their parents and all of us oldsters: “Do your homework [on the climate science]! Eat your vegetables [and less meat]! Clean up your room [and our only planet]!”. They are bringing a commitment to radical honesty about the gravity of the climate crisis and the stakes of continued inaction. As Greta Thunberg put it to the assembled world leaders at the latest UN Intergovernmental Panel on Climate Change (IPCC) gathering in Poland, “You are not mature enough to tell it like it is. Even that burden you leave to us children.” Or, to use words we Baby-Boomers might remember: “Let us not talk falsely now, the hour is drawing late.”

This time, we need to listen to the kids and show overwhelming support for equitable and urgent climate action.  The stars are aligning for a huge event: hundreds of companies are giving their employees the day off to support this action, and they will be joined by thousands of workers from tech giants such as Amazon, Microsoft, and Google. The youth are leading the way to a better future –  let’s have their backs.

Find a Climate Strike event near you or make plans to host your own!

This post borrows from the author’s longer piece: ‘And a Child Shall Lead Them,’ or: How This Boomer Learned to Stop Worrying and Love the Green New Deal.