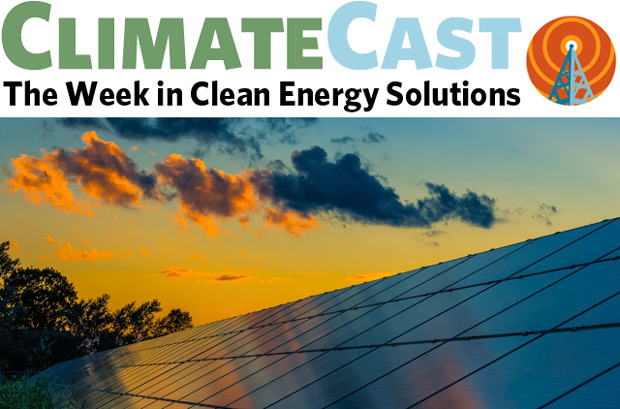 Colstrip units 1 and 2—600 MW of 1970s-vintage Montana coal power—will close by 2022, under a settlement announced last week by the Sierra Club and the plant’s owners. The agreement dismisses the club’s Clean Air Act allegations against the plant, and does not affect the plant’s two newer units, totaling 1,500 MW. The closure continues coal’s decline, which has lowered US emissions from electricity generation and which federal forecasters predict will persist through the 2030s with or without President Obama’s Clean Power Plan. Most utility executives see renewables as central to their business, according to a Ceres study, but some are still trying to hold back the tide. An Ohio power company is seeking regulators’ approval for a surcharge to subsidize its coal plants, and the Republican Party platform committee voted to declare coal a “clean” energy source.

By the end of this year, Canada will enact a national plan to price carbon, the country’s environment minister said Friday. Four out of 10 provinces have already adopted cap-and-trade or a carbon tax, but Minister Catherine McKenna says business wants the certainty that a nationally uniform carbon price would provide. In California, Gov. Jerry Brown is negotiating with the oil industry, environmentalists, and organized labor to extend the state’s cap-and-trade system, which expires in 2020. The governor’s Air Resources Board released a draft plan to continue the program to 2031, but Republicans argue that the governor needs legislative action to enact it, and that its revenue-raising provisions make it a tax requiring a two-thirds majority. California’s solar generation topped 8 GW, a 2 GW increase over last year’s peak, and nearly twice the peak production in the summer of 2014.

They’ve looked at clouds from both sides now

A new study in Nature finds that climate change is affecting Earth’s cloudiness in ways that fit with models’ predictions of global warming: shifting storm clouds toward the poles, expanding arid zones on either side of the subtropics, and raising cloud-tops to higher altitudes. This last development makes clouds a more effective blanket to keep heat from being radiated back into space, further warming the planet. The news came as Alaska baked last week under a heat wave that broke all-time records on Arctic Ocean beaches and roasted Fairbanks airport (at 96˚F) hotter than Orlando, Florida; more record heat is predicted for the central US this week. The heat is more than inconvenient: it can be deadly for farmworkers who labor in it.

The UK’s impending departure from the European Union will require the remaining countries to make deeper cuts in climate pollution to satisfy EU commitments under the Paris accord, according to a Climate Action Network analysis. Meanwhile, the UK and Germany came under fire for increasing subsidies to fossil fuels, and new British Prime Minister Theresa May faced criticism for merging the Department of Energy and Climate Change into another government ministry. Some fear the loss of “climate” from the departmental name will downgrade the issue’s importance; others think it won’t matter, given the country’s existing strong climate legislation. In the developing world, average energy intensity per dollar of GDP has dropped 40 percent since 1990, boosting hope for curbing climate pollution, and 14 South Pacific island nations have drafted a Pacific climate treaty that would ban new fossil fuel extraction and set renewable energy targets.

Whither the future of utilities? Harbingers abound

The falling price of renewable energy and storage will transform the US electrical grid, but the impact on customers and power companies will be determined largely by how nimble and adaptive utilities and their regulators are. These three provocative scenarios show how the grid could bumble along, shatter into isolated microgrids, or become more efficient through decentralized generation and demand management. News stories during the week heralded elements of all three scenarios: A Nevada data center sued for the right to quit the utility and buy power on the open market; Arizona Public Service is running three pilot projects in utility-owned rooftop solar and demand management; and four environmental groups have sued the mid-Atlantic grid operator for requiring that power producers be able to promise steady generation at all times of year.

To be fair: pricing issues from solar to peak power

Phoenix-area utility Arizona Public Service has attracted opposition to its proposed peak demand charge, which would base part of a customer’s bill on the single hour of their highest usage during every month. Consumer protection for solar customers is on the docket at the Federal Trade Commission, which is reviewing the fairness of residential rooftop solar leasing, particularly income projections that rely on an assumption that net metering will continue, even though it is being challenged in 22 states. Some utility analysts advocate a feed-in tariff instead—an approach that has been used mainly in Europe. In Nevada, a citizen initiative to restore net metering qualified last week for the November ballot.

In brief: Watch out for pokemon and monkeys

Pokemon Go players are showing up at power plants in the hopes of capturing the animated monsters of that augmented reality game, and one nuclear power plant worker reported that his plant was “filled with electric pokemon.” In India, rooftop solar installations are dealing with a less post-modern threat: marauding monkeys that have damaged the panels and carried off their electrical cables. In response, installers are mounting the panels on an eight-foot pole above the roof, out of the simians’ reach, and wrapping the cables in metal shielding.

Image: Clouds, whose shifting forms and locations are bearing out the predictions of climate models, above a solar installation in Ontario, Canada. Photo by Jonathan Potts, via Flickr.