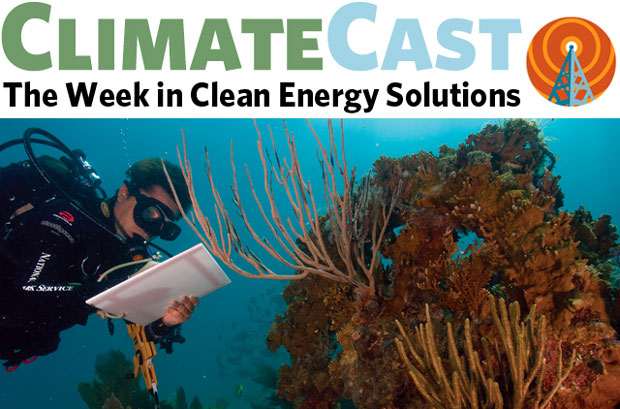 All the fossil-fuel power plants that a 2-degree-above-normal world can accommodate will have been built by the end of next year, according to a new study in Applied Energy (abstract, full draft). The research extends the “unburnable carbon” concept to “unbuildable infrastructure,” calculating that if that power-plant limit is exceeded, some generators will have to be retired early or equipped with costly carbon-capture technology for global temperatures to remain within the limits agreed to in Paris. Most planned coal plants are in China, India, South Korea, Indonesia and Vietnam; a new Sierra Club report examines the chances of slowing the rush to coal, which is no fool’s errand: “since 2010, two-thirds of proposed coal projects have gotten scrapped.”

Harbingers of the clean energy transition

Global renewable power capacity grew by 8.3 percent last year, the fastest rate on record, according to the International Renewable Energy Agency. Last year’s solar installations were up 25 percent over 2014, says the International Energy Agency, which notes that “super-competitive” solar rates are a “clear sign” that solar competes with most fossil and nuclear energy; Bloomberg announced that clean energy bested fossil fuel investment by 2 to 1 and set multiple new records in 2015. As clean energy becomes more competitive, economic growth is decoupling from carbon emissions, according to a WRI study that found 21 countries reduced GHG emissions while growing GDP since 2000, another sign that the world can go all the way to a clean energy future.

Moody’s lowered Chevron, Shell, and Total’s credit ratings last week, to account for their pinched cash flows and overextended leverage in the face of continued low oil prices. US shale drillers are encountering significant pressure from their lenders, which are cutting their credit limits by an average of 20 percent. In the battle for hearts and minds, a British NGO found that ExxonMobil, Shell, and three petroleum trade groups spend a total of $114 million annually to block climate action; InsideClimate News questioned whether the quasi-governmental Interstate Oil and Gas Compact Commission is a de facto lobbying group; and the fossil-fuel-allied Competitive Enterprise Institute faced a subpoena from the US Virgin Islands for data on its donors and climate-related activities.

More than one-third of Earth’s coral reefs are bleached and risk extinction due to heat stress, scientists have found, calling the link between global warming and the “unprecedented” bleaching of one-half of Australia’s Great Barrier Reef “incontrovertible.” Limiting fishing can help coral reefs recover, says a new study, as certain fish eat the harmful algae that grow on bleached coral. While coral reef death threatens food supplies for half a billion people, a new White House report finds climate change also endangers the US food supply because of diseases and toxins spread by warmer weather and will increase allergies, asthma, deaths due to heatwaves, vector-based diseases, and mental health problems. Meanwhile, melting ice caps are redistributing so much weight on the planet that it’s shifting the Earth’s axis of rotation.

States have met their Renewable Portfolio Standards while increasing electricity rates by an average of just 1.3 percent, says a new Lawrence Berkeley Laboratory report. Until 2007, renewable electricity growth tracked closely with RPS requirements, but has since risen much faster. Clean power production will have to double by 2030 to meet the targets that still lie ahead, including an increase that passed the Maryland legislature last week requiring 25 percent renewable power by 2020. At the municipal level, San Diego aims to consume only renewable electricity by 2035, provided voters approve Community Choice Aggregation, under which the city will buy clean power to be distributed by the existing private utility.

The new wave of nuclear power got a skeptical reception last week, as a think tank estimated the planned new UK Hinkley Point reactors will cost $56 billion more than equivalent renewable power over the next 35 years. India’s 12 proposed reactors are economically unviable and more expensive than the solar alternative, according to a new report from the Institute for Energy Economics and Financial Analysis. Even nuclear booster Michael Shellenberger acknowledged next-generation reactors are farther from viability than he’d hoped. Xcel Energy is considering mothballing its 1,100-MW Prairie Island nuclear plant to avoid needed upgrades, one of many aging reactors under financial pressure from cheap gas, solar, and wind power. Between the troubles of past and future generations of nuclear plants, an NRDC overview finds that nuclear power is “circling the drain.”

As solar and wind grow, extra electrons need a home

Surplus solar and wind power in Texas and California has begun pushing electricity prices on those states’ spot markets into negative territory during times of high supply and low demand, with California allowing over 1,000 MW of solar power to go unused in the middle of one day last month. The glut arises because it’s expensive to ramp up some gas- and coal-fired plants, so they pay to keep operating—as will wind farms, which earn a tax credit for each kilowatt-hour produced. In the short term, grid operators tackle this challenge by interconnecting with nearby utilities to find homes for unwanted electrons; for instance, Idaho Power last week agreed to join the western Energy Imbalance Market. Longer-term solutions include overnight battery storage (like this new Puerto Rican installation), compressed air, stored ice, or thermal storage.

Fall-out from the Porter Ranch natural gas leak could prompt southern California utilities to shift from gas-fired peaker plants toward clean energy to address their highest loads. The crippled gas storage field at Aviso Canyon will place limits on peak natural gas usage in the LA basin, state energy agencies said in a report last week, which could cause blackouts for up to 14 days this summer. But behind the scary headlines were proposals for smart energy improvements, such as expanded demand response programs, rate incentives, and faster installation of solar water heating systems in the coming year.