Business legends Michael Bloomberg, Henry Paulson, and Tom Steyer starring in a remake to the 80’s film classic Risky Business?  Ok, they’re no Tom Cruise, but, together they are spearheading an effort to highlight the ways that climate change is Risky Business for the US economy.  Bloomberg, former New York Mayor and founder of Bloomberg New Energy Finance, along with Paulson, former US Treasury Secretary and CEO of Goldman Sachs, recently teamed with  Steyer, founder of Farallon Capital Management to help business leaders understand the extreme risks posed by climate change to the US economy.

Enlisting the help of Rhodium Group and Risk Management Solutions, they produced a new report, The Economic Risks of Climate Change in the US, that highlights some of the key vulnerabilities that climate change poses to different regions of the United States and the economic repercussions of these risks. The Risky Business’ newest report provides an analysis of how tangible assets such as real estate, and commodities like energy and food, could be impacted during the next century.

Given the broad geographic and industrial diversity of the United States, The Economic Risks of Climate Change in the US analyzed economic risks from a regional perspective. According to the report, the most significant risk to the Northwest  is the increased risk from wildfires that could impact the lumber industry and in turn, the Northwest economy. One study found that the area of fire burn could increase by up to 54% in the Western United States, and another found the burn area could increase in Pacific Northwest forests by up to 79%, and 175% in Rocky Mountains in Idaho. With aggregate lumber profits from Washington, Oregon, and Idaho totaling $11 billion, increased burn areas would considerably decrease the region’s GDP. The report also identifies other key risks for the NW economy, including sea level rise. The Risky Business report is not unique in identifying severe risks – more comprehensive assessments for the Northwest can be found in the recent National Climate Assessment and a great summary from the Climate Impacts Group at the University of Washington. What Risky Business provides is a rigorous quantitative approach to risk assessment and unparalleled business and bi-partisan credibility.

Risky Business calls upon businesses to “play an active role in helping the public sector determine how best to react to the risks and costs posed by climate change, and how to set the rules that move the country forward in a new, more sustainable direction.”   In a recent Op-Ed in the New York Times, Hank Paulson called global warming “the challenge of our time,” and urged immediate action to put a price on carbon pollution.

In Oregon and Washington, the business community has a huge opportunity to help drive strong policy to confront this crisis. When Governors Kitzhaber and Inslee signed a new pact in October 2013 (read more in A Great Day for West Coast Climate Leadership), they committed to working with California and British Columbia, to create a West Coast bloc of climate action. Businesses can and should be at the vanguard of that effort. We have a tremendous opportunity to reshape our economy and contribute towards a shared vision of sustainable prosperity, powered by clean and efficient energy. But, in order to be successful, businesses which care about climate change and the risks that climate change poses to their profitability, must engage in a conversation beginning with climate policy. Not engaging in this great debate is the same as staying silent and letting others talk for you. And have no doubt – others will talk for you. The fossil fuel industry and its supporters will favor the status quo of doing nothing, but we need the business community to come together to recognize and support all businesses on climate and clean energy policy.

Climate Solutions is helping the Risky Business Project to bring former US Treasury Secretary Hank Paulson to Portland, Oregon, to participate in a lunchtime discussion on climate change, China and corporate Risk. Mr. Paulson will speak on Friday, July 18th at a sold out event onthe City Club of Portland’s Friday Forum. Learn more about the event and join the waiting list here. 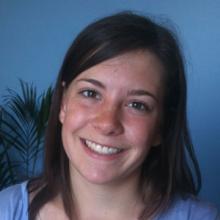 Risky Business: how NW businesses must respond to climate change

Joli has lived in the Pacific Northwest her entire life and has an interest in helping to preserve her home. She is a casual hiker and enjoys reading. She recently spent six months down under in Melbourne, Australia researching how climate change could affect investments, and is an engaged advocate for Coal Free Bainbridge on Bainbridge Island. She also attending Wesleyan University in Connecticut, pursuing a combined economics and environmental studies degree. Professionally, Joli is interested in how finance can be influential in social change, specifically around environmental and climate change issues.