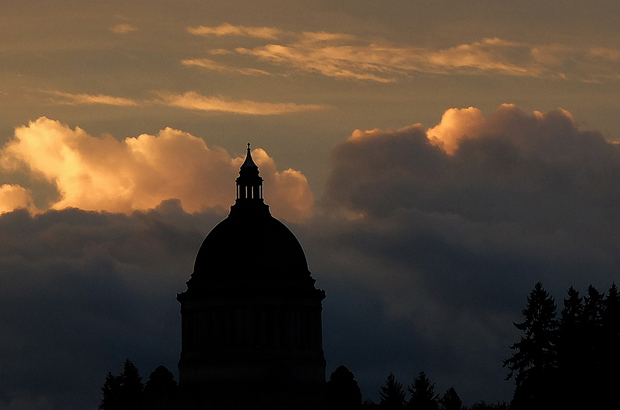 Last month, as the Paris climate conference wrapped up, national leaders from around the world gathered to commit their countries to a new, cleaner economy. Now, as before, the United States has a major role to play in reducing global greenhouse gas emissions. With the House and Senate still locked in climate denial, getting significant reductions in the US is going to depend on state leadership.

This is a challenge Washington State is ready for. Climate Solutions is working hard to decarbonize our state’s power grid, to cap climate-harming emissions, and to protect gains that we’ve made already.

Washington has long had a relatively clean energy sector, but there is more to be done. Our last in-state coal plant is on its way to closure, but hundreds of megawatts of our power comes from coal burned hundreds of miles away in Colstrip, Montana. We’re working with legislative leaders on both sides of the aisle as well as Puget Sound Energy to reduce our state’s use of coal power, and to add clean, new renewable energy instead.

At the same time, Washington is rapidly approaching a solar cliff. Our solar incentive package is getting close to expiration and current customers are already losing tax incentives they were banking on. Worse, new prospective customers are closed out of the system, threatening a burgeoning industry that cuts emissions and supports thousands of jobs in our state. We’re working to renew and extend these incentives.

Put a cap on it

Seven years ago, Washington passed a law requiring the state to lower emissions and clean up the air. And this summer, as the next step in making good on those requirements, Governor Jay Inslee directed the Department of Ecology to begin work on a Clean Air Rule, an economy-wide cap on carbon emissions. If this policy is crafted the right way, it has the potential to limit dangerous emissions that cause asthma in children and cancer in adults, in addition to accelerating the transition toward the clean economy we need.

But when sound climate policy is on the table, you can bet that the opposition will gear up. Already opponents are moving to stop the Clean Air Rule, while also preventing the state from drafting a plan to comply with the federal Clean Power Plan. At a recent legislative hearing, one Senator actually argued that if the Clean Air Rule moves forward, it would lead to suicides and domestic abuse! It won’t—and we’ll make sure to protect the Clean Air Rule.

Moving the ball down the field

While we promote policies that reduce carbon emissions, we must also defend the progress we have already made.   Since it is an initiative to the Legislature, the introduction of Carbon Washington’s carbon-tax ballot initiative I-732 gives the Legislature the opportunity to potentially put an alternative climate policy on the November ballot -- and that alternative could pose a threat to existing clean energy programs.

The oil inudstry and incumbent industries are pushing a number of potentially damaging proposals which could undermine our current renewable energy mandates. One state senator said last month that if he has his way in 2016, wind energy generators and other clean economy companies would be the big losers in this year’s legislative session. We will be working hard with our Olympia allies to ensure we don’t go backwards at the exact moment when our need and opportunity to lead has never been clearer.

Our lesson from Paris was plain—the road to a clean future goes through city halls and state legislatures. Progress starts in Olympia. We’re glad you are standing with us as we push for climate progress, and we’ll be back in touch with additional updates.

What happened to our climate leadership?
Climate wins still possible in Washington Legislature
This is what climate progress looks like
What we're in for (unless we act fast)