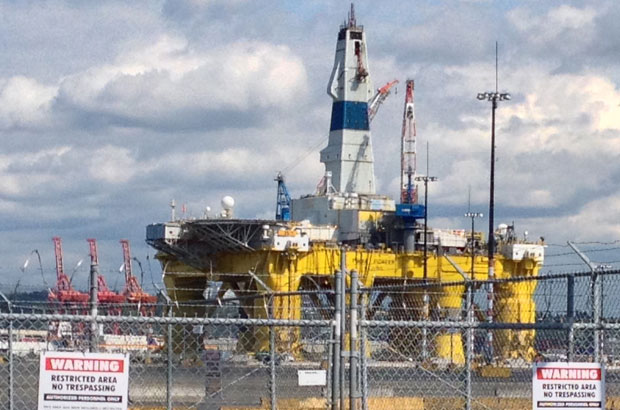 A group of major labor unions have issued a joint statement opposing Shell’s Arctic drilling plans and the Port of Seattle's decision to serve as a homeport for the operation. The statement (see below) calls for strong climate action, greater public accountability, and investments that create shared opportunity in a new energy economy.  It rejects the oil industry’s false choice between good jobs and a healthy future.  “This is jobs AND the environment, or neither.”

“We feel compelled to speak today given the stakes of climate change and the immediate and long term effects that this has on all people in the US and around the world... [Shell's actions] have catapulted us to the frontlines of climate change and called to question the policies we make as a society to address the global crisis. Would we be taking this position at this moment without this Rig here in our local waters? Probably not. But we would be taking a position soon on Climate Change anyway and this has simply fast-forwarded that historic necessity."

Below is the full statement and the updated list of labor organizations signing on:

The following labor unions, which represent over 60,000 workers in various industries across Washington State, declare our opposition to Royal Dutch Shell’s drilling in our Arctic waters and the use of our Port of Seattle’s Terminal 5 as their staging site. We stand alongside the many environmental, faith, social justice and retiree organizations, indigenous peoples and the thousands of individuals who oppose the drilling. We hope that adding our voice encourages others to join the Shell No! Movement. At the same time we declare our support for a strong climate policy at the state, regional and national level to reduce our global warming pollution and ensure that as we reduce this pollution we do so with equitable transition at its core.

Shell’s activities in Seattle and in the Arctic violate four values:

1. Healthy Community—Healthy Planet. Royal Dutch Shell’s record of drilling in the arctic gives us little confidence. Due to climate change and its causes, our union members, their families, and our communities are facing increased threats to our quality of life in the Pacific Northwest, including more severe heat-waves, droughts, flooding, exposure to air pollutants and allergens, ocean acidification, extreme weather events, food scarcity, higher costs for water and energy and increased spread of disease. We know from the overwhelming majority of scientists that we already have dangerous levels of carbon in our atmosphere and that we need to leave more carbon in the ground to maintain a viable ecosystem.

2. Healthy Future – Sharing Risks and Benefits. This is not a question of jobs versus the environment. It is jobs and the environment or neither. Indeed, if we are to seriously change from a fossil fuel based economy to an economy with new energy sources, we will need millions of new good jobs to get that work done. Along the way, as we transition, we will need to strategically repair, replace and create new infrastructure– from bridges to roads and rail road tracks to sidewalks. These new jobs will support our drive to reduce climate change. We advocate for massive new investment in low carbon/family wage jobs, including repairing our crumbling infrastructure and building a more efficient transportation system and improving freight mobility.

Addressing climate change is the seminal issue of our time and an opportunity to both address the growing inequality in our region and our state, and at the same time create more good jobs. Communities of color, indigenous peoples, and low-income communities right now face disproportionate adverse health outcomes due to our collective reliance on polluting fossil fuels. We must reduce the health risks for these communities as we also reduce fossil fuel pollution. Additionally, any revenue generated from climate change policies, must in part go to making sure that the costs for people with lower incomes and communities of colors are more than offset from the impacts of climate change. Neither workers nor vulnerable communities should shoulder the burden of climate change, or our response, while others reap the benefits.

3. Democracy and Accountability. We are concerned that the Port of Seattle Commission appears to be contradicting the voices of the communities they are elected to serve; it recently sued to halt wage increases for low-wage workers that had been voted in by the public. The Commission also issued the lease for the terminal before holding public hearings on the issue, which is neither transparent nor accountable.

4. Responsibility to the Greater Good. We accept both scientific fact and native wisdom that we cannot leave the tough choices to others or to the future. It is important that we work to advance the wellbeing of all workers. For example, Passing Paid Sick and Safe Days and $15 in Seattle and SeaTac will improve the health and welfare of our entire community. We know that evicting Shell from Seattle Terminal 5 is another step toward a better future. We call on elected officials to use this crisis to further democratic ideals by reprioritizing the greater good and being accountable to the communities they represent.