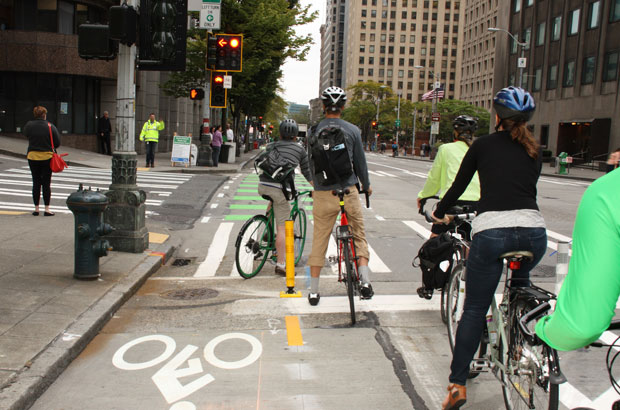 Viadoom. Seattle Squeeze. The Period of Maximum Constraint. People in the Seattle area have been wearing thin these phrases while discussing the traffic that was expected to reach nightmarish levels during last month's closure of the Alaskan Way Viaduct. Yet, it turns out that there was much ado about what actually amounted to . . . not much. Though the viaduct carried 90,000 cars a day before its closure, traffic on the region’s other major highways has actually been lower, and commute times have only been slightly above average. What did happen is the number of people cycling doubled and public transit—including the water taxi—saw more use. In a Seattle Times article, a man who began taking the Link light rail asks himself, “why did I wait so long to engage in such relaxed commuting?”

It’s a good question, and there are several different answers. But let’s start by asking an analogous question: why do so many people drive when, as the lack of doom in Viadoom has demonstrated, it’s not always necessary?

One reason is simply because car infrastructure exists and is usually prioritized over other methods of getting around. Research shows the more roads that are built, the more vehicles will fill them, meaning congestion doesn’t abate with new roads but rather remains as bad, or even gets worse. This is called induced demand. At the outset, as travel times decrease and driving looks like a more convenient option, people opt to drive more and congestion creeps back up. In the long term, development is structured around roads, locking in behavioral patterns. Though road expansions seem appealing at the outset, the data show that more roads actually mean more traffic, not less.

However, because much of our development has been built around roads and the assumption that people will get around by car, getting around by bicycle or on foot is all the more difficult—and can be downright dangerous. In fact, in the past decade, nationwide pedestrian deaths have increased by 35.4%—more than 13 people are killed each day, on average. When infrastructure is designed around getting people in cars around more quickly, our safety is compromised.

It is clear that for our personal and collective safety we need to make some changes. It is also clear that, as Viadoomed Seattle demonstrated, using climate-friendly transportation—public transit, cycling, or walking—is not only a possibility for many residents, it's a highly desirable Very Good Idea. Even before Viadoom, the amount of vehicle travel in Seattle was decreasing, despite our rapidly increasing population, while transit use has increased. But Seattle and other parts of the Pacific Northwest certainly have work to do in further improving public transportation systems and pedestrian and cyclist safety. For example, when asked, 35% of survey respondents in Seattle said the most common reason they don’t ride their bicycle more often is that they “don’t feel safe.” People want to get around in different ways, but our lack of safe infrastructure often constrains this.

That is why we want to make it easier and safer to get around by bicycle or by foot and to take public transit (or do all of the above in one trip!). We hope the Washington State legislature will pass laws that allow for better enforcement of “blocking the box,” which slows traffic and endangers pedestrians, clarify pedestrian and cyclist safety, and allocate ample funding to multimodal projects. In addition, we support electrifying the transportation grid by supporting public agencies in electrifying their bus fleets and incentivizing electric vehicles over fossil-gas powered vehicles. In the meantime, we are also supporting a clean fuels standard, which will lower the carbon intensity of transportation fuels (including electricity). Reducing the amount of driving, and electrifying what remains, while increasing other transportation options is something we must do—for our climate, our health, and our safety.