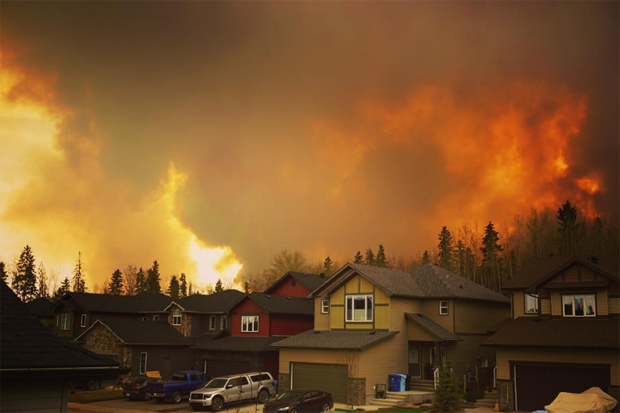 SHAUNA LYN A-FEENER
Wildfire in the tar sands region—More than a humanitarian crisis
Derek Hoshiko and Erika Lundahl
May 5, 2016

Last year, we biked to Fort McMurray from Seattle. Now, it's in flames.

By now, news has reached many of us of the wildfire raging through the Athabasca River Basin, forcing the entire city of Fort McMurray, Alberta, to evacuate. As of right now, the entire province of Alberta is in a declared state of emergency. (Find out more about what’s happening here, here, and here, or on Twitter via the hashtag #ymmfire.)

This story is bigger than just an unprecedentedly large forest fire... and its accompanying humanitarian crisis. This wildfire, which experts are already linking to climate change, penetrates the heart of the largest fossil fuel extraction zone in North America—the tar sands—home to five different First Nations, and thousands of oil industry employees and residents. Our conversations about this fire need to grapple with the true complexity of this crisis—the human dimensions of our fossil fuel economy, and how climate disruption afflicts certain people and locations faster, crueler, and with little or no notice. This is not the dialogue happening in the "outmoded mainstream" media, nor in the majority of comments we are reading online about this fire.

Last August, we undertook an epic journey. The Road to Athabasca was our bicycle pilgrimage to the tar sands in Northern Alberta, along with some friends and climate justice activists. We spent several days with the Fort McMurray First Nation, in the city of Fort McMurray itself, and with the Fort McKay First Nation. During our journey in Canada, we heard reports from back home that the largest wildfire in Washington state history was burning in the Okanogan, surpassing the previous largest wildfire just a year earlier in Carlton. Smoke from those fires shrouded the sky as we passed through Jasper National Park, the spiritual and literal heart of our entire region.

While the wildfires in Washington and Oregon were deeply concerning, it was late August—prime wildfire season—and also much further South of Fort McMurray. Massive droughts over the last few years, in conjunction with warmer winters bringing pine beetles further north, have made wildfire seasons longer and more intense.

The most recent massive wildfire in Alberta history was in 2011 at Slave Lake, about 500 km southwest of Fort McMurray. Our travels allowed us to meet with Ceno Loyie from Slave Lake, who showed us around the areas where a third of his town was burned to the ground. He also explained that his town now burns down every few years.

At Climate Solutions, we talk about the impact of climate change as being unequal, disproportionately impacting indigenous people, communities of color, immigrant and refugee communities, and frontline communities, among others. We talk about this and the need for a just transition. The tragedy unfolding in Fort McMurray illustrates in stark reality why we must do this.

The tagline of our Road to Athabasca project is “A Pilgrimage to Bring the Tar Sands Home.” We bring them home in several ways including by literally exposing the diluted bitumen that flows through the Trans Mountain Pipeline to Anacortes, WA (the site of upcoming Break Free from Fossil Fuels actions). More importantly, we bring them home by telling the stories of the people from the Athabasca River Basin. 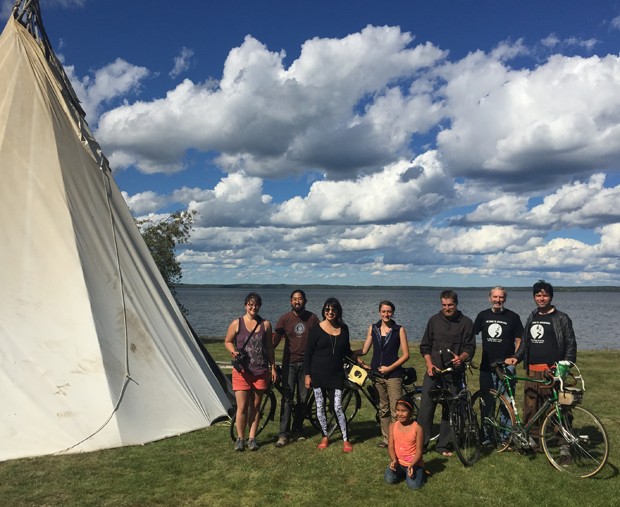 Fellow cyclists on the Road to Athabasca, at Gregoire Lake near Anzac, Alberta

Our approach was unique—riding by pedal bike from our homes in Seattle and on Whidbey Island, through Anacortes, WA to the site of the Shell and Tesoro oil refineries, along the Trans Mountain pipeline, to witness and listen, to make connections, to share concerns, but not to debate or protest. Because of this, we formed personal connections, especially from the Fort McMurray First Nation. Because we bicycled, we gained a deep connection with the land and water that connects us.

We spoke on the phone just yesterday with a friend we made on our journey: Lee Deranger, an Ojibwe (Anishnabe) First Nations member, and family relation to Eriel Deranger, spokesperson for the Fort Chipewyan First Nation. As of early afternoon, all her family was safe and accounted for, but three members who live in Fort McMurray had suffered total loss of their homes.

We have a deep sadness for the people directly impacted and directly affected, for the land and for the animals. It is frightening to be looking at it and we are not seeing it. Our friend Heather uses the analogy of cancer. It is like we have heard the diagnosis that we have stage-four lung cancer, yet we continue to smoke.

One of the many realizations from our pilgrimage was the role of very real, concrete, and collective impacts of our civilization and its greenhouse gas emissions. It is easy to look at a single fire, or a single disaster, or the impact of extraction of water at a single well pad, or a single year, and then have a robust discussion, debate, and trolling about it. But we rarely have discussions about the entire system. We need to change how we approach everything, including development, but especially how we treat each other, and what the collective impacts of our decisions are.

One of the ways that we need to change, especially those of us who are clean energy advocates, climate activists, or privileged environmentalists is to show up for each other. When the mudslide in Oso, Washington occurred in 2014, the deadliest single landslide event in United States history following 45 days of abnormally heavy rainfall, a poignant question came up at a climate conference: what should we do? Inspired by the work of activists involved in Occupy Sandy, we suggested that we consider ways in which we can show up and help. Many of you may be asking yourself, how can I help? Donations can be made by going to the Red Cross website or by phoning 1-800-418-1111.

As we spoke to Lee Deranger yesterday, a flotilla down the icy Athabasca river was currently underway to provide support to the nearby Fort McKay First Nation Reservation, which was severely impacted. Evacuees from Fort McMurray were headed south—as well as many thousands headed north to oil industry encampments. Now, as we’re writing this, we are getting updates that the fire is moving uncontrollably south, forcing the evacuation of the Fort McMurray First Nation, as well as the neighboring communities of Anzac and Gregoire Lake Estates.

No one is safe from the collective impacts of a crisis like this. We must all be ready and willing to rise to support each other.

But to our earlier point about collective impacts, now that we are hopefully aware, we should be asking ourselves and each other important existential questions. What does it mean to be human? How shall we live? And then get to the hard work of getting everyone involved—and changing everything.

For now, however, the homes of the people who housed and fed us and treated us like family, the tipi that embraced our fireside conversations, the lodge where we shared sweat and tears, and the shore, blueberries and spirits of all that held us on the far point of our journey, all stand at the brink of flames. 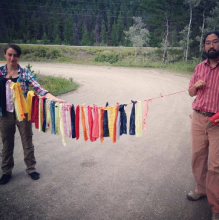