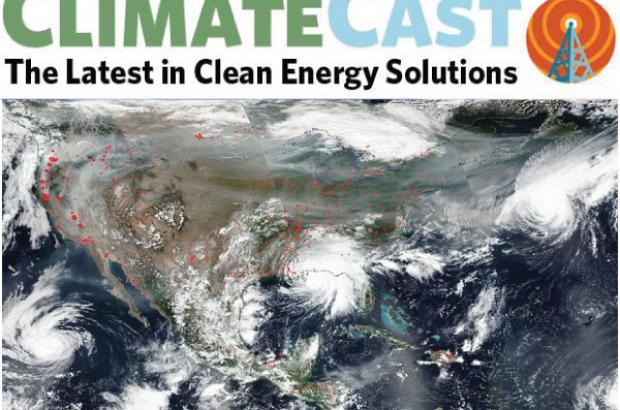 For many across the West Coast, the end of summer has been harrowing with hellish wildfires and living under unchanging grey and smoky skies, or watching the slow march of flood waters rise in the streets. We’re living through extraordinarily complex and challenging times, and continuous news coverage of multiple crises can feel extreme and extractive. Yet we also know that while 72% of Americans believe that global warming is happening, only 43% of Washingtonians and Oregonians believe that climate change will harm them personally. The visibility of smoky skies, stories of survival and devastating loss, and real-time reports of catastrophic systemic failure in providing an equitable response to all those impacted by fires, presents everyone with the stark reality of climate change. We know for many, they must have direct experience to believe that climate impacts are happening.

Many of us needed to allow the haze in our heads to clear and see the events of the past few weeks clearly. While it can seem like the news coverage was nothing but a mass of fire, smoke, and storm, there were also moments of real climate progress—solutions to address this crisis and valiant efforts to keep us moving to reduce our fossil fuel addiction.

For this ClimateCast, we’ve highlighted some of the best of the fire and hurricane coverage and provided a few bright spots in our world too. “Climate Week NYC” begins next Monday and there has never been a better time to keep up the conversations and keep on believing in a cleaner, more just, prosperous, and fossil free future.

The West on fire

The West saw sudden and unprecedented wildfires ignite across the entire region, with hard stories of escape and loss under daytime skies drawing comparisons to Mars. Many West Coast cities reported the worst air quality in the world while under the blanket of smoke, its plume now reaching as far as the East Coast and Europe. Also arguably unprecedented were the number of news outlets drawing real-time connections to climate change, including local news outlets exploring if this is Paradise lost.

While many stayed inside to stay safe, coverage also showed how many cannot. Farmworkers and others who have to work outside to earn a living or who face homelessness experienced especially hard health impacts exacerbated already by the COVID-19 pandemic and economic depression. The fires also created an uptick in misinformation and climate denial, with several elected officials and industry groups claiming the myth that our forest fire problem is just due to forest mismanagement.

On the other side of the country on the other end of the climate spectrum, the Southeast was hit by Hurricane Sally, the seventh hurricane of the 2020 Atlantic season to date. Notably only six other years have experienced seven hurricanes by the same time in September. Perhaps even more significant, this week marked only the second time in history that five tropical storms were tracked in the Atlantic at the same time.

Scientists say that both the slow speed of storms and intensified rainfall are both likely impacts related to increasing moisture in the atmosphere e.g. a changing climate. Hurricane Sally was also notable for its slow, lumbering pace and torrential rain leaving thousands without power and communities across Florida, Alabama, Georgia, and the Carolinas submerged under rising floodwaters.

With most Americans now seeing regular images of climate change impacts and destruction in the news these past weeks, the world will come together (virtually) starting Monday to discuss acting on climate. This gathering of government, private sector, and other organizations marks the beginning of a 14-month stretch that culminates in 2021’s UN climate negotiations hosted in Glasgow.

While many a year’s climate negotiations may seem like repeat scenarios with little progress made, 2020’s event arrives amidst a changing context of positive action including a flurry of corporate commitments to address climate change and continued acknowledgment that reducing emissions is good for business. Additionally, the market for zero emission electric vehicles continues to shift upwards, including a pandemic-driven need to reduce emissions in delivery vehicles, major efforts to increase consumer EV adoption, and increasing trends in heavy-duty electrification.​​​​​​

One thing you can do? Keep talking about climate.

The visible smoke, intensity of storms and fires, and increasing coverage of the debate on climate, means we’re hearing more about climate generally these days. This is a good thing and we need to keep it up—bringing up the issue in our everyday lives with others is a critical piece to adopting solutions and making progress in our transition to a clean energy economy. If we talk about how climate change affects us, it becomes a close-to-home problem rather than one happening farther away or in the future.

Yale Center for Climate Communications research shows that if people draw a personal connection to being impacted by global warming, they’re far more likely to take action—double digits more likely—and believe that solutions are real to solve it.

What the hell just happened?
ClimateCast: A hot and heavy week in August
We're live! With Gov Inslee and more in our new online event series
“The house is on fire and it’s our house”: Momentum for clean fuels for Washington grows