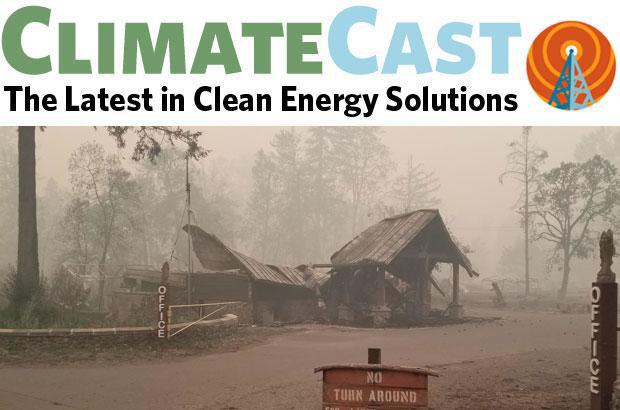 California Governor Gavin Newsom signed an executive order last week that will accelerate the transition for all new cars to be electric, or otherwise zero-emissions. In California, as in other states, transportation is the single largest source of the greenhouse gas emissions that cause climate change. While California is the first U.S. state to announce this step, at least 15 countries have pledged a similar phase-in, and other states are expected to follow suit.

During the same announcement, Gov. Newsom also asked state lawmakers to pass a ban on new fracking permits by 2024. The Governor has received criticism from climate advocates in the state for his history of mixed signals on fracking; Grist Magazine responded to last weekend’s announcement by asking, why hasn’t California banned fracking yet?

Clearing the air on wildfire and climate change

Though smoky air has largely given way to clear fall skies in the Pacific Northwest, the western US is not finished with the threat and danger of wildfires. California, Arizona, and Colorado continue to endure blazes, increased heat, and poor air quality. In response, Oregon’s Rogue Climate is renewing calls for action at every level of government; the organization's offices burned to the ground in September's wildfires. In a Seattle Times op-ed, Climate Solutions’ Vlad Gutman-Britten and critical care physician Dr. Amy Markezich put to rest the argument that forest management, and not climate change, is to blame for the unprecedented epidemic of wildfires. They want us to see the smoke as a call to action for more political accountability, and to pass climate solutions that will benefit our health and create more jobs.

After receiving criticism for leaving the issue off the list of topics for the first presidential debate this week, Fox News moderator Chris Wallace inserted a surprise question on climate change. It was the first time in more than a decade that nominees were asked to address the climate crisis in a presidential debate. President Trump’s weak and incoherent responses perfectly reflected the overall climate record of his administration, which one journalist recently summarized as “a plan to not fight climate change.”

​​​​Meanwhile, as the November election draws near, the White House continues to pursue that plan with vigor; E&E News reports that “the White House has been quietly working in recent weeks to reshape the leadership of NOAA” by installing climate deniers in key science positions. Climate and environmental advocates worry, however, that President Trump’s most durable blow to progress on clean energy could turn out to be his controversial selection of an Associate Justice to replace the late Justice Ruth Bader ​​​​​Ginsburg on the Supreme Court.

Appreciations of Justice Ginsburg's career are properly focusing on her advancement of equal rights; it is also worth noting her her environmental accomplishments.

Climate Week 2020 was marked by a fresh round of commitments from multinational corporations and governments to reduce climate pollution. China announced plans to achieve carbon neutrality by 2060, and German automaker Volkswagen unveiled plans to manufacture at least 1.5 million EVs annually by 2025. Prince Charles called for a “Marshall-like plan” to fight climate change, reminiscent of sweeping US efforts to rebuild Europe in the aftermath of WWII.

On the other hand, many fossil fuel corporations have been hard at work not furthering climate goals. With some fanfare, BP and Royal Dutch Shell recently issued net-zero pledges and withdrew their support from several industry trade groups lobbying against climate action. But an investigation by Unearthed and Huffington Post revealed that both oil conglomerates remain “active members of at least eight trade organizations lobbying against climate measures” and continue to support groups like the Alliance of Western Energy Consumers, “which crusaded against Oregon’s efforts to put a price on carbon emissions.”

A report from Oregon Public Radio revealed that reputedly green Oregon businesses, including Nike, are fighting a transportation ballot measure that would provide transit fixes serving communities of color, expand the MAX light rail system, and invest in more electric buses for the Portland metro region. Meanwhile, Amazon Employees for Climate Justice renewed calls for the company and its CEO to lead on climate action commitments, not just climate rhetoric. They want the company to commit to reaching zero carbon emissions by 2030, a more ambitious target than that which Bezos announced last year.

A new report from the International Monetary Fund criticizes governments, including the US, for continuing to subsidize the fossil fuel industry to the tune of more than $5 trillion a year. The US spends more on fossil fuel subsidies each year than it does on the military. The report suggests that ending subsidies would bring “staggering” benefits “fiscally, but also in terms of human life.”

Young voters are intimately aware that they will be forced to bear the full effects of climate change,” writes Jacob Wallace; young people are expected to vote this year in record numbers.

Climate change, public health, racial justice--the 2020 election will be unprecedentedly crucial for all of the most important issues our communities care most about. Washington and Oregon will begin voting this month; it’s time for us all to make sure that we and everyone we know are ready to take part.

Take the Climate Voter Pledge and maximize the power of your vote!