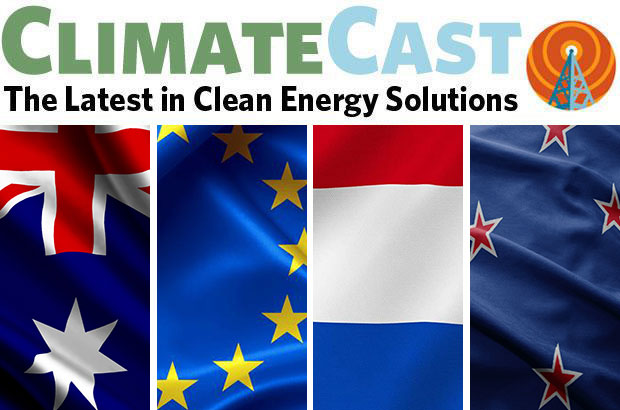 (Other) nations leading on clean energy transition
Jonathan Lawson
May 27, 2022

As both Washington and Colorado (and the city of Vancouver, BC) move forward with emissions-reducing clean buildings action, a number of national governments are taking broader action to protect the climate. The Netherlands will soon benefit from a transformative commitment to clean buildings, with all new multifamily residential buildings warmed by heat pumps rather than gas. As part of what is being described as a “landmark” net zero climate plan, New Zealand will invest in decarbonizing heavy industry, expand clean energy transit, and will subsidize drivers switching to electric vehicles.

In what was seen as a national election “greenslide,” the people of Australia ousted the fossil fuel-friendly government led by Scott Morrison. Pre-election polls suggested that climate change was a top issue for most voters; incoming Prime Minister Anthony Albanese said the country had the potential to become “a renewable energy superpower.” Finally, the European Commission has proposed a dramatic energy transition plan which would double the amount of clean energy produced, including a phased requirement for solar in all public and commercial buildings.

It has been a horrifying month for gun violence in the U.S. Last week’s mass shooting in Buffalo, NY highlighted the concept of “eco-fascism”. The suspected killer claimed in a written manifesto to have been motivated partially by this racist anti-immigration ideology that has been amplified by programming on Fox News and embraced by some right-wing extremists. As described in the manifesto, eco-fascism argues that “left” environmentalism is “presiding over the continued destruction of the natural environment itself through mass immigration,” justifying anti-immigration bias, and white supremacy, by linking them to a concern for the environment.

The issue has importance for the climate movement not least because drought, heat waves, wildfire and other climate impacts are already provoking waves of migration across the world. How will the United States and other destination countries respond to the need? This week, a United Nations conference discussed the challenges associated with climate migration, and the need “to put people at the center” of climate mitigation strategies “and ensure that their human rights are protected as the world changes around them.” As climate journalist Mary Annaïse Heglar wrote this week, “confronting white supremacy is both an adaptation and mitigation climate strategy.”

Tensions created by climate migration also arise with internal displacement, as in Chico, CA where people made homeless by wildfires in the region are trying to land on their feet. Local officials have used the increase in this refugee population as a pretext for enacting laws that criminalize homelessness.

Recently, both Centralia, WA and Los Angeles, CA announced plans to become “green hydrogen” hubs on the West Coast. Other countries including Vietnam and India are also considering the technology, which can produce carbon-free energy if generated using clean electricity, while the process is still costly. The Centralia facility would be located at the site of a soon-to-be-retired coal plant (with an electricity source yet to be confirmed); its supporters note that the green hydrogen it produces should power specific sectors that are the toughest or last to electrify. They project that green hydrogen could be “the best solution for reducing climate impacts from long haul trucking, marine shipping, transcontinental air travel, and steel making, for example, all of which would be impractical to convert to battery power.”

Utility companies in the U.S.—the most powerful of which operate as investor-owned monopolies—have made the news for a longstanding pattern of profit-over-people actions. Oregon-based methane gas utility NW Natural is seeking approval to increase their rates for a second time in less than two years. If approved, residential gas customers would see a roughly 25% cumulative increase in their gas bills, the proceeds from which would bankroll, among other things, expansions to the company's fossil fuel infrastructure. [Editor's note: Climate Solutions, along with several partner organizations, is a co-plaintiff in this case.] NW Natural is also under fire for suing to roll back the state's landmark Climate Protection Program regulations, their misleading statements about  renewable "natural" gas, and targeting K-12 students in their pro-gas marketing campaigns. Utilities operating against the public interest are not limited to the Beaver State; in a recent episode of Last Week Tonight, comedian/investigative journalist John Oliver explained how utilities across the country came to be so powerful, the lengths to which they will go to maximize their profits, and common tactics they employ to influence and obstruct public processes.

More and more electric vehicles of all types are coming to market—electric fire trucks, food service and freight trucks, even tractors. For farmers facing rising diesel prices, Bloomberg reports, “energy is one of the few things [farmers] can control. Electrifying their farm, being able to plug their tractor in at home, and being able to completely remove all these other market forces provides a lot more stability, and really adds another layer of resilience to our farming community.”

Grist reports on new research showing that numerous factors, psychological as well as financial, contribute to buyers’ anxiety about switching from gas to electric vehicles. Still, the share of electric vehicles on the road is increasing around the world.

Think climate action will be expensive? Check out the price tag on inaction

A new report that the consulting firm Deloitte presented before the World Economic Forum this week finds that if the world stays on its current fossil-fueled energy trajectory, it will cost $178 trillion over the next 50 years. On the other hand, swift action to eliminate greenhouse gas emissions worldwide by 2050 could add $43 trillion to the global economy over the same period and plant the seeds for a green Industrial Revolution. The study concludes that “achieving net-zero emissions by 2050 isn’t just an aspirational goal—it’s an economic growth imperative.”

Check out Not Too Late, a new climate site launched by Rebecca Solnit and Thelma Young Lutunatubua, described as “a project to bring newcomers to the climate movement.” Articles and other resources gathered on the site are selected to communicate both the urgency of the climate crisis and a hopeful pragmatism about steps we can all take to pivot away from our unhealthy dependency on fossil fuels.

Video: a Not Too Late conversation between Rebecca Solnit and Buddhist teacher Joan Halifax.