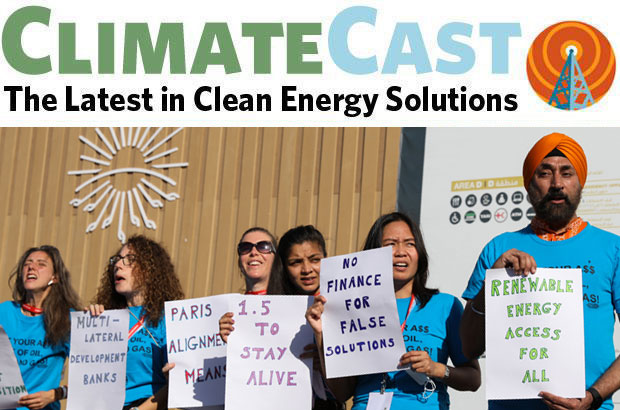 Climate election 2022: neither a red nor a green wave

Los Angeles Times  reporter Sammy Roth recapped this week’s election results with the observation that every election is a climate election, and noted some important shifts in candidates and the electorate. “The fact that Republicans were not running against climate change, I think was the single most telling thing in this election,” said Edward Maibach, director of George Mason University’s Center for Climate Change Communication. In several swing races, “climate action was an asset rather than a liability” for Democratic candidates, with Generation Z climate voters also playing a key factor. The first Gen Z-er was just elected to Congress, motivated to run in part because of the climate crisis.

However, in many races Democratic candidates did not campaign on their record of climate action—a missed opportunity especially in jurisdictions where Black and Hispanic Americans are more likely than white Americans to say that climate change was important to their vote. While several congressional races remain too close to call as of Thursday afternoon, including in Washington State, the shifting balance of power will likely make Congress a more hostile place for climate action. Climate advocates will thus need to place even more focus on action at state and local levels.

Several states saw party power shifts which may lead the way to more state-based climate action, including Michigan, Minnesota and Maryland. In Oregon, climate was a hot issue in the close race for governor, with Tina Kotek narrowly beating two candidates backed by the timber industry, both of whom had called for rolling back state climate laws. By passing Measure 113, Oregon voters also moved to end the practice of legislators staging walk-outs in order to block progress; Republicans used the tactic in 2019 and in 2020 to kill Democrats’ efforts to pass a greenhouse gas cap-and-trade plan.

The annual U.N. Climate Conference known as COP27 is meeting this week in the Egyptian resort town of Sharm El-Sheikh. The tone set there by United Nations Secretary-General Antonio Guterres is a dire one. "Humanity has a choice: cooperate or perish," Guterres said. "It is either a climate solidarity pact—or a collective suicide pact." Indigenous communities remain at the forefront of the fight against climate change. Yessie Mosby, representing the aboriginal community in Australia, voiced concerns that Indigenous communities were being sidelined at COP27. Promises of climate action made during COP26 in Glasgow last year have not been kept, according to independent climate watchdog Climate Action Tracker. One of the main objectives at the end of that meeting was for member nations to adopt stronger emission-curbing goals. So far, Australia is the only country to have adjusted its goals to a level recommended by scientists. The global energy crisis has intensified because of the Russian invasion of Ukraine; European countries have massively expanded infrastructure for importing liquified natural gas, as part of short-term efforts to reduce dependence many of them built on Russian supplies—and to avoid directly funding Russian aggression in Ukraine. The persistence of dependence on gas is one factor as nations worldwide continue to fall short on climate pledges made in advance of COP27.

U.N. Secretary-General Antonio Guterres has called efforts to address “loss and damage” the “litmus test” for COP 27,  referring to the economic and non-economic damage caused by floods, hurricanes, typhoons, record droughts, etc. that have been increasing in frequency due to climate change. Representatives from developing countries say they need an estimated $1 trillion per year from developed countries and financial institutions to combat climate change. There is skepticism that a proposed Loss and Damage fund for developing nations can be established resulting from COP27 discussions. A number of European governments have pledged some funds, but look to the United States to join in the creation of a persistent fund (the US was absent from those talks). Along with national and NGO delegations, many fossil fuel lobbyists are attending COP27— in fact 25% more of them than attended the Glasgow conference. The lobbyists outnumbered the combined delegations of the ten countries most impacted by climate change.

Human rights abuses of the current Egyptian regime under Abdel Fattah el-Sisi are casting a dark shadow over the COP27 talks. The Egyptian government is holding more than 60,000 political prisoners; the plight of Alaa Abdel-Fattah in particular is drawing attention and embarrassment to this year’s host country. Fattah is a software developer who was instrumental in the 2011 Egyptian revolution; he is currently staging a hunger strike after spending 9 years imprisoned for voicing opposition to the current regime.

Heat pumpin' it up in Washington

Washington’s efforts to clean up building emissions (the state’s fastest growing source of pollution) notched a another big win this month as the State Building Code Council voted to require heat pumps in all new residential construction, beginning in July 2023. The new codes are some of the strongest in the nation, establishing clean electricity as the main source of space and water heating for all new buildings. Washington’s residential code update is the latest in a wave of recent actions around the country; approximately 90 jurisdictions in 11 states have adopted building electrification policies since 2019.

Building emissions globally have soared to record highs but the IPCC found that 61% of those emissions could be mitigated by 2050 through effective policy. Heat pumps are increasingly seen as a key part of a clean energy and energy efficient future: with a forecast for higher winter heating costs, heat pumps are making headlines as a lower cost option for homeowners and for transitioning away from fossil fuels. The Biden administration has made heat pumps central to its clean energy efforts including major incentives to electrify homes in the Inflation Reduction Act and ramping up investment in domestic heat pump manufacturing.