While much of the media attention of the state legislature session focused on the near government shutdown and the budget negotiations, the legacy of the 2013 Washington State legislative session may ultimately come down to the very first bill signed into law—Governor Inslee’s Climate Action Bill.

Alongside business and community leaders at the Bullitt Center in Seattle, Governor Inslee’s first bill signing ceremony launched the state on a path to reduce greenhouse gas emissions and grow the clean energy economy.

The Climate Action Bill (HSB 5802), requested by Governor Inslee, will produce a plan for the state to meet its emissions reduction commitments. As climate change drives ocean acidification, reduces snowpack and feeds wildfires, moving swiftly to decarbonize the state’s economy is an economic imperative. The Governor’s Climate Action Bill is a strong response to perils of climate disruption and will provide a framework to unleash the jobs and investment that come from building a clean energy economy. 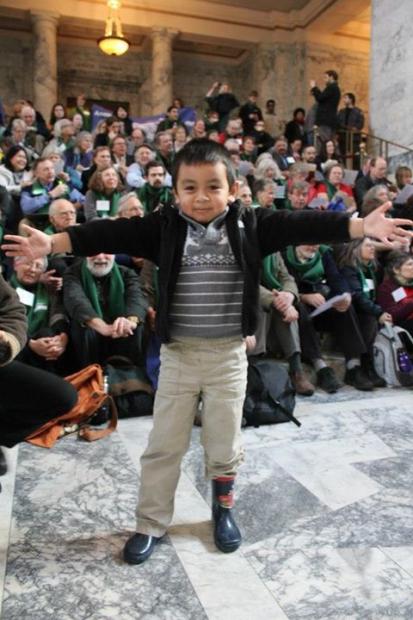 Washington Environmental Council
How much does this guy want climate and clean energy solutions? Lobby Day 2013

How much does this guy want climate and clean energy solutions? Lobby Day 2013

While Governor Inslee pushed for climate action, the legislature was decidedly less aggressive. Lawmakers were given multiple opportunities to invest in a prosperous, sustainable future but instead cozied up to oil lobbyists and listened to climate deniers. Of the four policies that made up the Environmental Priorities Coalition “Clean Energy Solutions” priority, only the Climate Action Bill was enacted. The other three policies, which would have created jobs, saved money and funded education, all failed: 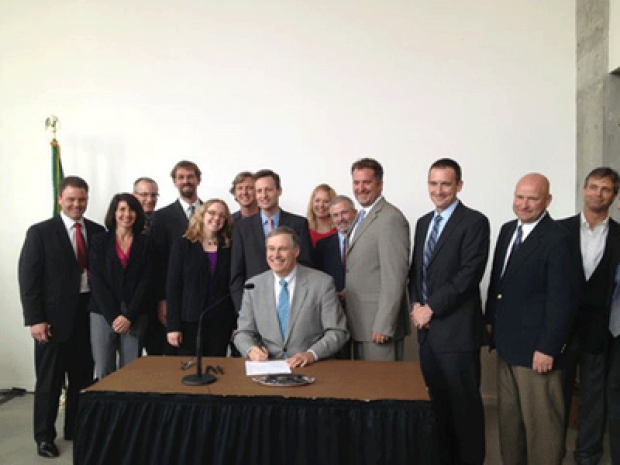 Even after the window for legislative action closed, there were great advances to spur clean energy in the budget. The capital budget includes $92 million dollars in new clean energy programs. The hugely successful Jobs Now grants for public building energy-efficiency projects received $32 million. Though less than previous budgets, this allocation will create hundreds of jobs, save energy and save our schools money. The Clean Energy Fund is a $40 million investment to open up new capital for innovative and proven clean energy technologies across the state. In addition to these programs, the Legislature reinvested in the successful Energy Matchmakers program and theCommunity Energy-Efficiency Program.

It was a complicated session, fraught with leadership changes, two special sessions and tug-of-war budget negotiations. For five full months, voters raised their voices for clean energy, and champions in Olympia took the message to heart. The results: millions of dollars for clean energy investments and a dedicated effort to meet our states’ emissions reduction targets.

We look forward to working together next year and building on this success.