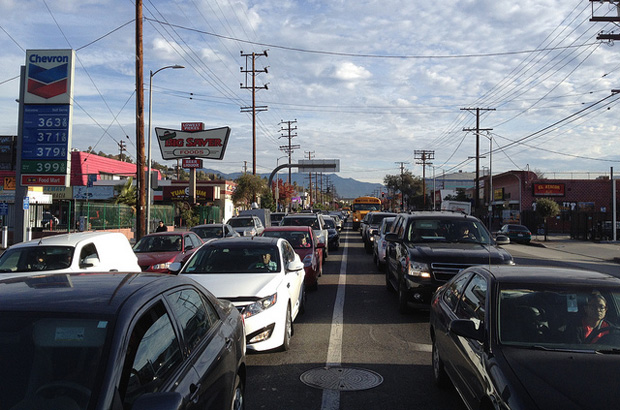 Clean fuel programs are up and running successfully in California and British Columbia, cutting pollution, reducing health risks, and giving consumers more choices.  Fuel costs have actually been dropping significantly, despite oil industry claims that huge increases were on the horizon.

There is an overwhelming environmental and economic case to break oil’s monopoly on the transportation sector.  Tailpipe emissions (primarily from gasoline and diesel) account for nearly half of the greenhouse gases spewed into the atmosphere in Oregon and Washington, as well as massive health impacts on affected communities.

Not only that, billions of dollars flow out of our states each year to pay for the fuels and that is money that could circulate in our local economy instead, if we were to decrease our consumption of petroleum.

Clean fuel standards promote a full range of alternatives to petroleum, not just biofuels.  Breaking big oil’s stranglehold on our transportation choices will require a full range of alternatives, including electric vehicles, renewable fossil gas, hydrogen, sustainable biofuels, and lower carbon fossil alternatives, such as propane and fossil gas.  The clean fuel standard rates every energy source on its carbon intensity, and requires a gradual reduction in the overall mix.

For example, electric vehicles provide a huge opportunity for pollution reduction and consumer savings in Oregon and Washington.  The Union of Concerned Scientists has found that EVs emit significantly less global warming pollution than cars, even with a relatively dirty mix of fuel powering the grid.  In Oregon and Washington, where there is abundant, clean and relatively cheap power on the grid, the comparison isn’t even close.  And EVs will be getting even cleaner as we reduce the remaining percentage of coal and other fossil fuels on the grid.

Some have pointed to a recent World Resources Institute study recycling allegations that some biofuels compete with food production and do not reduce carbon emissions, as a reason not to move forward with a clean fuel standard.  This argument doesn’t hold water.  First, the clean fuel standard promotes all kinds of cleaner alternatives to petroleum, and measures them all based on their carbon content.  Second, the WRI study has been thoroughly rebutted in many places, including in an analysis by the Environmental and Energy Study Institute, which points out biofuels’ multiple co-benefits and notes that:

The production of biofuels and biofuels feedstocks will not only reduce GHGs and lower dependence on petroleum but provide immense benefit to farmers and communities.  Regionally appropriate biofuels feedstocks have the potential to revitalize agricultural practices, reduce the use of toxic gasoline additives, such as benzene, and enhance rural economic opportunity, thereby increasing rural welfare and economic security.

The WRI study’s critique focuses on crops that take lands that otherwise would be available for food production and dedicate it exclusively for fuel. But these types of crops are not a major factor in existing biofuel production in our region, let alone in the efforts to develop new significant sources of fuels.

The Northwest has large and diverse stocks of biomass that can be used to create new transportation fuels, including wood residues, organic wastes, and crops such as canola that are grown in rotation with wheat.  Climate Solutions' work on sustainable advanced fuels is focused on alternatives that meet international sustainability standards, such as those developed by the Roundtable on Sustainable Biomaterials, and do not contribute to food security issues.

By measuring the life-cycle carbon emissions of each fuel source, a clean fuel standard can account for precisely the issues that the WRI study raises, and ensure that energy source with the lowest carbon footprints receive the greatest support.

For that reason, the clean fuel standard is unpopular with some producers of first-generation, food-based biofuels.  California’s program, for example, was unsuccessfully challenged in court by Midwest corn ethanol producers, who objected to the standard’s focus on ensuring real carbon reductions, over the entire life-cycle from planting through refining, blending and distribution, to the use of the fuel in transportation.

We are in agreement with the EESI study, which notes, “In the search for a low carbon economy, an “all of the above” approach needs to be taken towards renewable electricity and fuels generation.  The U.S. and the world can’t afford to wait – sustainable biofuels are available now.”

We are excited to see a growing coalition of businesses, labor leaders, communities of color, local governments, and citizens concerned about a healthier future coming together to promote policies that provide real, cost-effective, and cleaner choices to break big oil’s monopoly at the gas pump.

Now is the time for Washington and Oregon to join our neighbors to the north and south and adopt a clean fuel standard.