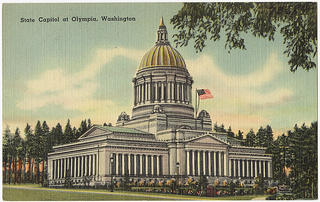 Governor Inslee's Climate Workgroup issued its final reports last month, and while members remained divided through a series of contentious discussions over the past year, the final recommendations do include a number of sensible climate solutions for Washington State. These include a cap on carbon emissions, replacing out-of-state coal with renewable solar and wind power, and investing more deeply in research and development for tomorrow's efficient technologies.

The Climate Workgroup, you will recall,  was tasked with proposing policies that would reduce climate pollution in Washington State. Now that the workgroup's final reports have been submitted, it is clear that only three of its members--Governor Inslee, Senator Ranker, and Representative Fitzgibbon—can claim to have fulfilled that mission. Sure, every member of the workgroup signed their name to a set of proposals, but the list provided by Senator Ericksen and Representative Short included nothing that would achieve the State’s emission reduction statutes, so it’s hard to say that counts. The policy proposals set forth by Inslee, Ranker and Fitzgibbon, by the way,  coincide neatly with most of the nearly 10,000 individual comments and public testimony provided to the workgroup. They show a way forward for climate leadership and a clean energy economy in Washington. (All of the workgroup's reports, compiled into one document, can be found here.)

The primary recommendation from the Inslee-Ranker-Fitzgibbon plan is a cap on carbon pollution. Setting a limit on carbon pollution is the only sure way to achieve the statuary reduction targets in an economically efficient way. A binding cap would end our current regime of unlimited carbon dumping, a status quo that provides a massive hidden subsidy to the fossil fuel industry. Once a cap on pollution is set and carbon pollution is accurately priced, clean energy solutions receive an economic benefit for solving climate change. Economy-wide policy has been effective at reducing pollution and creating jobs in California and British Columbia, and is needed in Washington to drive the clean economy.

Once an economy-wide cap has been set, sector-specific policies can be particularly effective at reducing emissions with lower costs and greater job creation. The following policy proposals in the Inslee-Ranker-Fitzgibbon plan fit the sector-specific model:

These reasonable proposals build off policies with successful track records for pollution reduction, cost containment and job creation. Governor Inslee, Senator Ranker and Representative Fitzgibbon are to be commended for taking their role on the Climate Workgroup seriously and thinking hard about what policies will reduce emissions and create jobs. With this type of climate leadership, we know what needs to be done; now is the time to go make it happen.