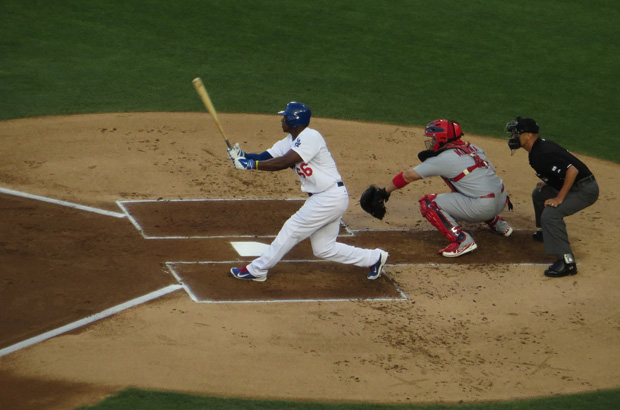 Let’s assume that Taco Bell tacos are a good thing. Just work with me here.

Let’s get real, baseball fans. We need a serious federal commitment to short-term and long-term recovery.

They have kind of a fun promo going in conjunction with the World Series – “Steal a base, steal a taco.” And today is the big day: Cameron Maybin stole a base in game 2, so today (Nov. 1), you can get a free taco. Cool. If nobody had stolen a base, no taco. No big.

Now comes T-Mobile, with a promo offering $20,000 for hurricane relief efforts for every home run hit in the World Series. The Harvey-hammered Astros and heat-stroked Dodgers have responded by breaking the record for home runs in a World Series, and it ain’t over yet. Sweet! More taters, more relief!

But what if it had been a pitchers’ series, sans long balls? When it’s tacos on the line, it’s all in good fun. But hurricane relief? Vital health and safety interventions after a devastating disaster? “Oh well, no homers, better luck next time?” And even at $20K a pop, how many home runs would it take to make a dent in the need?

But look, it’s more awareness, a little more money for relief… whatever, it’s fine. What’s hard to take is playing this little game against the backdrop of the ongoing failure of the collective, institutional, federal response. Well over a month after the storm, 70% of Puerto Ricans and over 80% of the US Virgin Islands are still without power. People are dying for lack of electricity to run dialysis machines and other lifesaving medical equipment. Based on reports from funeral homes and crematoria, the death toll in PR appears to be much higher than the official estimate of 51.

I hope the Dodgers and Astros keep knocking the cover off the ball tonight in game 7.  And I hope folks will dig deep to help relief and recovery efforts, especially in Puerto Rico and the Virgin Islands, where contributions lag far behind those in Florida and Houston. (The Hurricane Maria Community Recovery Fund, for example, is directly helping the most vulnerable communities).

But let’s get real, baseball fans. We need a serious federal commitment to short-term and long-term recovery.

Puerto Rico’s energy system needs to be rebuilt, and there’s no use making new investments in fragile fossil fueled energy systems that will blow down in the next storm, while sowing the seeds for more climate-juiced disasters. Former Puerto Rican Energy Commissioner Ramon Cruz and former EPA Regional Administrator Judith Enck make a compelling case here for rebuilding a cleaner, more decentralized, more efficient, more resilient energy system – a system that can withstand the hard rain ahead, without making it worse.

And even the most ambitious disaster response and recovery efforts will be overwhelmed by the escalating climate crisis if we don’t stand and fight for climate justice.

All the fury focused on the poor careless bozos who set off the Eagle Creek Fire in Oregon this summer could be much better spent on those who knowingly created the underlying conditions for these fires… and sea-level rise, and more damaging tropical storms, and the drought in Northern Africa, and ocean acidification….the “Merchants of Doubt” who loaded the dice for all of this.

Exxon knew. Exxon persisted. They blocked our path to solutions. They broke it. They should pay for it. And they must stop before they break everything else.

That’s the home run. And it’s the bottom of the ninth.