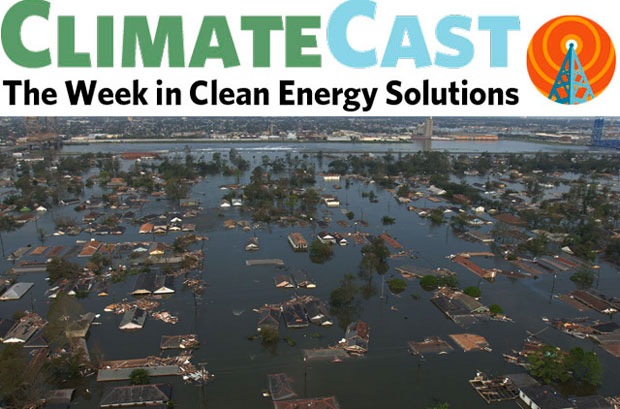 U.S. wind energy is selling at the record low price of 2.5 cents of kWh and SunEdison Inc. broke ground on the largest solar farm in Colorado (300 gigawatt-hours/year) with pricing that beat fossil gas. Surging wind turbine orders made Europe’s turbine makers top stock market performers; France will double its commissioned solar power capacity due to high demand and competitive pricing for 400 megawatts of solar installation; and new research forecast India to be one of the top five solar markets in the world by 2020. Is it any wonder that the International Energy Agency finds renewable electricity overtaking fossil gas to become the second largest source of global energy after coal?

Closely following Pope Francis’ papal encyclical on climate change, Islamic leaders and experts from 20 countries issued a declaration in Istanbul calling upon the world’s 1.6 billion Muslims to address climate change by committing to 100 percent renewable energy or a zero emissions strategy by 2050 or risk “ending life as we know it on our planet.” The Islamic Declaration on Global Climate Change draws upon an environmental framework found in traditional Islamic principles. The statement is likely to put pressure on oil-producing Gulf states in advance of the Paris climate talks in December.

Seattle’s Sound Transit issued more than $900 million in green bonds, the largest ever by any municipal government, to finance bus and light rail improvements, while the European Investment Bank offered a €600m Climate Awareness Bond, bringing its total of climate-friendly project investments to €10 billion. Green bond demand has consistently exceeded available funds. New Citigroup research suggests that decarbonizing’s incremental costs are limited and affordable, return on investment is acceptable, and avoiding liabilities is significant. Goldman Sachs seems to have gotten the Citi memo as the financing giant agreed to create a $1 billion clean power fund with SunEdison, the world’s largest renewable energy developer.

A new study of 114 fossil gas-gathering facilities in 16 plants in 13 states by Colorado State University researchers found the amount of methane leaked while producing fossilgas is eight times higher than current EPA estimates. Methane is 34 times more harmful than carbon dioxide in trapping heat and causing global warming. Proposed EPA rules released this week on methane emission apply only to new and modified equipment so would not address current methane leakage. The rules for controlling emissions from new fracking operations and plugging leaking pipelines and storage tanks would cut methane emissions 20-30 percent, half of the Obama administration’s goal of decreasing oil and gas emission 40-45 percent below 2012 levels by 2025.

On the 10th anniversary of Hurricane Katrina, which left 1,833 dead and caused $108 billion in damage, New Orleans transit system is operating with 55 percent fewer bus and streetcar trips than before the hurricane hit, and the lack of service disproportionally impacts poor neighborhoods. In a speech, New Orleans Mayor Mitch Landrieu called his city the “canary in the coal mine” for drawing attention to the country’s infrastructure deficits and noted that the disaster was manmade due to failed federal levees. But engineers say that the new replacement levees are inadequate to protect New Orleans from another storm the size of Katrina or larger.

The largest and most toxic ocean algae bloom in history stretches from California to Alaska and is killing a wide range of sea life. Unusually warm waters enable the algae to grow; a recent Nature Geoscience study found global warming has reversed the natural ocean cooling that occurred over the past 1,800 years, with seas now heating up 20 times faster than they are cooling. Science released a raft of papers describing how climate change and human incursion threaten the world’s forests, and a team of researchers found evidence that the odds of getting sick from salmonella infection increase for people who live near coasts as changing climate creates extreme temperatures or major rainfall.

National Renewable Energy Laboratory researchers are using genetically modified blue-green algae to produce ethylene, the chemical found in plastics which, when made from fossil fuels, emits more CO2 than any other chemical process. Scientists have also found a way to extract carbon dioxide from air to create carbon nanofibers, which play an important part in manufacturing electronic components and batteries, but engineers caution that the technique is not likely to scale to be able to remove enough CO2 from the atmosphere to reverse global warming. The algae solution for ethylene could also have challenges scaling.

Image: "New Orleans, LA., August 29, 2005—Aerial of a flooded neighborhood with homes flooded to their eves. In the background is one of the breeched levees with water entering the area.”

Note: After a week's break, ClimateCast will resume publication on Tuesday, September 8, 2015.