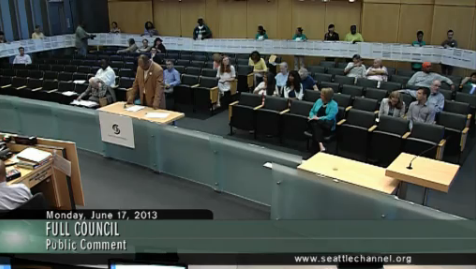 The Seattle City Council voted unanimously to pass the Seattle Climate Action Plan this past Monday, resolving to pursue a broad set of strategies to achieve the city's long-term goal of carbon neutrality by 2050.

The Climate Action Plan is the result of three years of research, analysis, and policy development conducted by the Office of Sustainability & Environment in conjunction with other local city officials and offices, as well as considerable engagement with the citizens of Seattle. The new plan builds upon a variety of compiled data and case studies, including a comprehensive carbon neutral scenario report, Getting to Zero: A Pathway to a Carbon Neutral Seattle, developed by the Stockholm Environment Institute.

Many leaders from local businesses and nonprofit organizations as well as a wide variety of community members attended the city council session to demonstrate support for the City's bold leadership.

Immediately garnering a reaction and camera flashes from the crowd during public comments was Michael Woo, director of Got Green, a grassroots organization that works to ensure that low-income communities and communities of color have equal access to benefits of the green movement and the clean energy economy. As Woo delivered his comments, approximately 20 Got Green advocates unrolled a long banner of 850 signatures in support of the plan's emphasis on hiring locally for newly created eco-jobs. The petition banner encompassed nearly the entirety of the chamber.

“We see the targeted local hire strategy as one key way of both helping to create jobs for our local economy was well as being good for the planet,” Woo stated.

Kellie Stickney, director of marketing and outreach for Sustainable Works, spoke of the long-term benefits of a plan such as the Climate Action Plan, saying, “The investment in preserving our environment will pay off in energy savings and quality green sector jobs.”

Steve Gelb, local director for Emerald Cities Seattle, also expressed support for the initiative. The Emerald Cities Collaborative is a national nonprofit network that seeks to promote the environment, economy, and equity. “We support the Climate Action Plan that will help reduce greenhouse gases and help build the city that we all want to live in and work in,” Gelb said.

Eileen Quigley, program director of New Energy Cities, commended the City Council’s leadership while stressing the importance of aggressive action. “I urge your unanimous support for the Climate Action Plan,” said Quigley. “Let’s get it passed so we can get going on implementation.”

Planning for carbon neutrality is a complex process that involves narrowing and sequencing strategies and tactics for reducing greenhouse gas emissions over time. In this context, the Climate Action Plan is an important first step that outlines key strategies in transportation and land use, building energy, waste, and resilience to climate impacts. Prioritization and rapid implementation of crucial components are also critical.

“The time to act is now. The Climate Action Plan cannot be a vision that sits on a shelf,” affirmed City Councilmember and Chair of the Energy and Environment Committee Mike O’Brien in a written statement. “The City is committed to getting to work immediately on the actions in this Plan and to lead the way for other cities.”