Toward a Common Cause
Richard Woo
March 5, 2014
In 1942 at the height of World War II, President Franklin D. Roosevelt declared “We Can…We Will…We Must!” as part of a massive communications campaign to unite the American people toward a common cause. Back then, the call to action was for the purchase of war savings bonds—a financial tool for the everyday citizen to help fund wartime military operations.
Now 70 years later, a clarion call of a different sort is gaining momentum among a growing number of college campuses, faith communities, and investment committees.  This time the cause is not about surviving a war but rather the survival of the planet and the risks posed by a dramatically changing climate. The financial tools being put to use are the divesting of fossil fuels and investing in renewable energy / sustainable alternatives.  The goal is to redirect financing, fuel innovation, and accelerate the shift to a lower carbon economy—which in the popular vernacular might literally “Save the World.”
Divest-Invest Philanthropy
The latest addition to the climate action community is Divest-Invest Philanthropy, a growing coalition of U.S. and global foundations pledged to divest endowments from fossil fuels and invest in the clean energy economy. Read more about Divest-Invest Philanthropy.

Divest-Invest Philanthropy launched on January 30, 2014 with 17 initial signatory foundations including:  Wallace Global Fund; The John Merck Fund; The Sierra Club Foundation; Ben & Jerry’s Foundation, Inc.; Jessie Smith Noyes Foundation; and The Russell Family Foundation, among others.  The combined assets of these foundations is nearly $2 billion.  The story was news and the press conference drew business reporters from the major global media including:  New York Times; Bloomberg; Washington Post; Financial Times; Seattle Times; Reuters; Associated Press; and others.  For example see the New York Times story here.  A second round of signatory foundations are expected to be announced in fall 2014.
The Russell Family Foundation

At The Russell Family Foundation, we’ve been practicing various forms of mission-related investing for nearly a decade; though the path towards divest-invest began in November 2012 when several board directors raised concerns about climate change, fossil fuels, and sustainable alternatives.  What followed at the Foundation was a thoughtful, measured process of research, learning, and decision-making that took place over the first six months of 2013.  This was a complex task given the diversity of opinions and investing perspectives held among our board of directors—consisting of Russell Family members, community representatives, and next generation participants.  Working in partnership, the Foundation staff and the advisors at Threshold Group, our investment advisory firm, conducted joint due diligence for the board of directors.  Like the points of a compass, the Foundation examined the questions of fossil fuels, investment practices, and sustainable alternatives from four distinct directions: 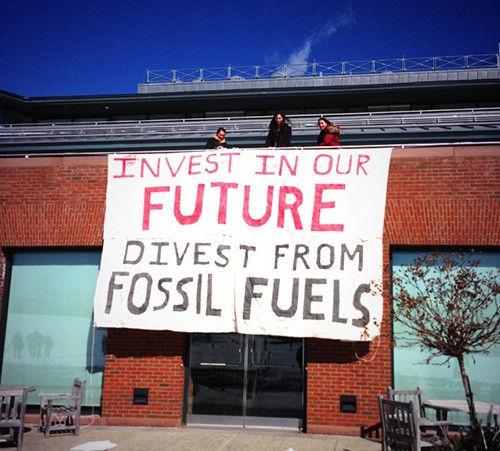 Divest-Invest at Wesleyan
Wesleyan students sent a powerful message to their Board of Trustees, calling on the university to divest its endowment from fossil fuels. Photo credit: K.C. Alvey.
In the end, the board of directors came to a consensus decision to begin the Foundation’s investment shift by divesting our portfolio of holdings in the “Filthy Fifteen,” considered the largest, dirtiest coal stocks in the U.S.  That divestment was completed in the summer of 2013 and those funds have been reinvested in sustainable alternatives.  TRFF is an organization that learns by doing.  We are continuing to reassess and adjust investment strategies and practices related to fossil fuels and renewables.  We have only gone a short distance on our journey and we are leaning on the lessons learned by others in the wider divest-invest movement.  From this experience, we’re coming to believe:
Postscript:  Lest we think that divesting and investing are financial tools best wielded by large institutional investors, I just finished a phone conversation with Caroline, a 68 year old retiree in Seattle who called after reading the New York Times article on Divest-Invest Philanthropy.  Describing herself as having modest assets, Caroline said:  “I’m so inspired by what the foundations are doing, I want to explore the same with my investments.”  Without offering direct financial counsel, I encouraged Caroline to express her goals directly to her investment advisors, learn more about her stock holdings, and seek out investments in funds oriented toward sustainability.
To quote one of our Foundation’s investment advisors:  “…these financial tools are accessible to everyday citizens, just like the war bonds were in their time…capital markets have responded to broad demand and market-rate investments exist for anyone to participate. Readers of the Climate Solutions blog will ask, 'How can I participate? Can I move my small 401k?' The answer is yes, this campaign is not only for altruistic foundations anymore.”
Editor’s note: Climate Solutions encourages you to find out more about divestment opportunities for institutions and individuals by checking out the Go Fossil Free campaign. 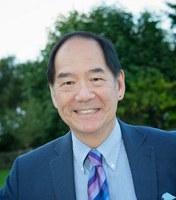 Toward a Common Cause