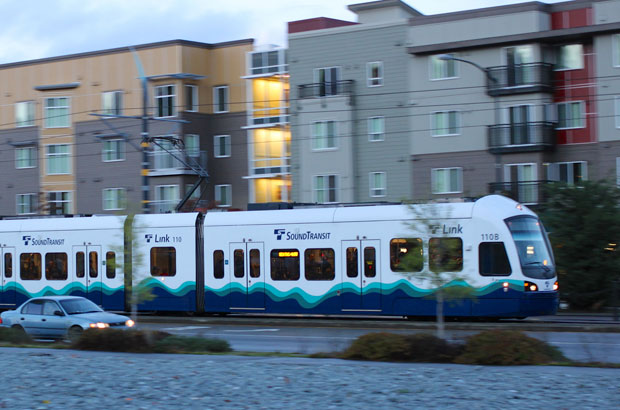 In King County, Lawrence Frank and Company found in 2005 that residents of the most walkable neighborhoods drove 26 percent fewer miles than those living in areas of greater sprawl. Fewer miles traveled translate directly to lower tailpipe emissions.

Indeed, the King County region needs affordable housing within cities to halve its carbon by 2030, and specifically to reduce vehicle miles traveled (VMT) 20 percent by 2030, part of a package of goals that King County and 11 members of the King County-Cities Climate Collaboration adopted in January 2015.

To achieve these goals requires: continued strong leadership on land use planning and policies at the regional scale that encourage density and direct growth into urban areas; affordable housing on the scale that the City of Seattle is currently exploring; and dramatic expansion of affordable transportation options, such as Move Seattle and King County’s acclaimed ORCA Lift program. These policies and programs can be a powerful combination, but only if they work hand-in-hand.

Of course, cities are on the front lines of this issue. Seattle is wrestling with how to create equitable, climate-smart housing in a way that maintains neighborhood character and Shoreline, WA is planning ahead for two light rail stations that will open in 2023.

Forecasted to grow significantly in the coming decades, Shoreline has been developing specific plans to accommodate more housing, jobs, and businesses in close proximity to transit. Other King County cities will absorb this growth as well; the question is how low-carbon and equitable the results will be.

Puget Sound is not alone in walking this path, as federal and state officials have encouraged density and affordable housing near transit in other communities across the country:

But the powerful combination of smart land use, affordable housing, and low-carbon transportation depends on all of the puzzle pieces being in place, as another Urban Land Institute report, 2009’s Moving Cooler, concluded.  Indeed, Vancouver, BC has excelled at meeting its low-carbon transportation goals, but still struggles mightily with affordable housing.

The road is not easy, but affordable housing is an important urban planning issue and a climate solution.