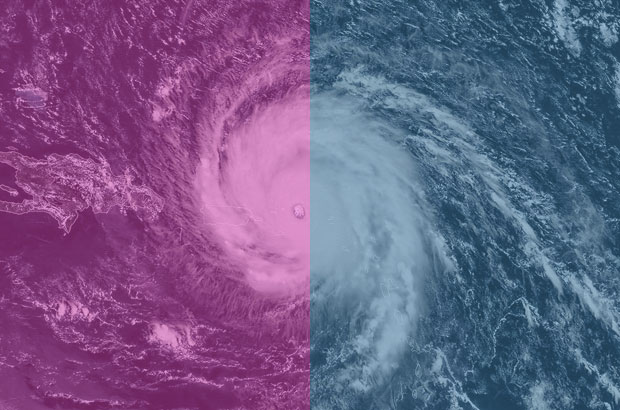 It's hard to summon up surprise when we discover that sexism and gender bias has seeped into yet another realm of our lives. But, the weather? Climate science?

Seriously, the weather? And climate science?

Yes. This may not come as shocking news to many women, but in 2014 the National Academy of Sciences released a study finding that most Americans underestimate the force of hurricanes...given female names.

The study's findings may initially provoke disbelief or snarky comments (it did with me), but they indicate what is actually a big problem, and a deadly one. People underestimating women is never a joke; and people underestimating female-named storms turns out to be perilous.

From the study:  "For severe storms, where taking protective action would have the greatest potential to save lives, the masculinity-femininity of a hurricane's name predicted its death toll."

It may be hard to take in that gender bias would be so embedded in our culture that it would show up so dramatically in the naming of storms.  In a recent CNN story, one researcher argued that this study cannot prove that female storms were more deadly—since before 1979, these storms were only named after women (wait, so, the fact that weather sexism used to be more overt is supposed to make me feel better?).

It turns out that that argument doesn't hold anyway, as the CNN story summarizes: “To test the theory, however, researchers asked participants to predict the force of 10 hurricanes. Male storms were seen as more intense. This is true across the participants’ gender.”

The study on hurricane and gender-bias concludes that “[t]his finding indicates an unfortunate and unintended consequence of the gendered naming of hurricanes, with important implications for policymakers, media practitioners, and the general public concerning hurricane communication and preparedness.”

So what to do with these findings, besides shaking our heads? It makes me think of an idea already put forth by several climate advocates, including Bill McKibben: perhaps we should name major storms after the fossil fuel companies whose destructive actions are making such storms more frequent and more dangerous. Imagine a Hurricane Exxon or Hurricane Shell. Or, for that matter, Hurricane Rex Tillerson or Hurricane Scott Pruitt. (Hey, at least those would be male names.) It’s an interesting idea.  It also reminds us of the need to talk about storms in real terms not just with their names, but as Anna Fahey points out, with the names of the people lost.

Of course, this challenge runs deeper than a name change.  There are many forms of denial and I’m not just talking climate.

I have several thoughts on “mother nature” (more of that in another post), but the concluding words of the NAS study speak to a reality that is difficult, yet crucial, to accept:  that sexism and gender bias remains deeply embedded in our society and in our country in many ways we're not realizing given it's even in perception of storm names.

We need to have conversations about global warming; how it is and will be impacting our lives -- and convey that there is still a window of time to stop making it worse and build a clean future. The Yale Center for Climate Communications has found that while there is a majority of Americans that think global warming is happening, people remain unlikely to talk about it.  So let’s start more climate conversations.

As we do that, let’s not avoid talking about other deep societal problems. Let's not be silent about the sexism, the gender bias, the racial bias that we know is present in the rest of our lives beyond the names of extreme storms.  As news headlines remind us every day, sexism is not only present in the perception of hurricanes, but also in our classrooms, laboratories, operating rooms, boardrooms, legislatures, and Hollywood moguls' hotel rooms.