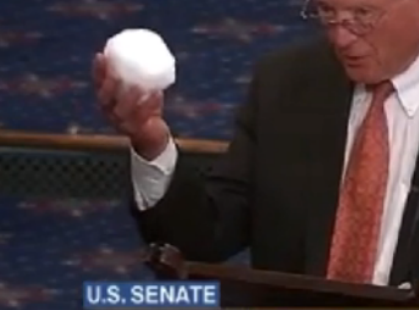 Climate change denial is nothing if not adaptable.

The evasions are now mixed together in a murky soup of “uncertainty.” EPA Administrator Scott Pruitt ladled it up last week in an interview on CNBC’s Squawk Box:

“I think that measuring with precision human activity on the climate is something very challenging to do. And there's tremendous disagreement about the degree of impact. That - so, no, I would not agree that it's a primary contributor to the global warming that we see.”

(Pause for normalization check: This is not some think-tank Confusionist. This is the head of the United States Environmental Protection Agency. He was subtler in his confirmation hearing.)

“Uncertainty” may seem like progress compared to bald-faced denial, but it’s really just a more resilient form of obstruction. Climate inaction doesn’t require a coherent refutation of climate science. The bar isn’t that high; doubt, it seems, does the trick. And it’s hard to imagine a safer refuge for doubt than “uncertainty.”

Jack Cushman at InsideClimate News usefully unpacked how ExxonMobil overstates “uncertainty” by deliberately confusing scientific uncertainty with “policy uncertainty” (uncertainty, that is, about whether we’re going to stand up straight and address this crisis.) This deception is part of a pattern that has prompted investigations by state Attorneys General and the Securities and Exchange Commission for consumer and investor fraud.

But the abuse here seems much greater than deception. As Cushman explains, the “uncertainty” at issue is primarily about policy responses to climate change…about whether humans will seriously address the climate crisis. Citing that uncertainty as a reason not to act is a singularly brutal form of circular logic, designed not just to deceive but to disable.

The logic, if not the literal message, runs like this:

The part in bold is of course unspoken, concealed. But it’s the most important part. We must – on pain of mass extinction – spell it out and resolve that uncertainty.

To distract from this vicious ruse, some protectors of the fossil fuel empire like Secretary of State and former ExxonMobil CEO Rex Tillerson acknowledge that climate change is real and “action should be taken.” (Leave aside the fact that ExxonMobil spent decades concealing this reality and blocking action.) But of course, to “act” is not necessarily to deal. Effective action – action sufficient to prevent catastrophic disruption – would require the vast majority of fossil fuel reserves to remain unburned. ExxonMobil probably couldn’t survive that. Its value as a commercial enterprise is in significant part a function of its reserves, and its unlimited right to dig them up and sell them for combustion. So when CEO, er, Secretary Tillerson says, “action should be taken,” he doesn’t really mean “let’s solve the problem.” And even when the oilgarchs feel compelled to do something, “uncertainty” is used to justify weak gestures and forestall real solutions.

Exploiting uncertainty about our willingness to address the climate crisis by disguising it as climate science uncertainty is a twisted form of bullying, not unlike gaslighting. It asks us to accept the proposition that we lack the will and the guts and the vision to save ourselves as a rationale for inaction. We seem to be powerless, so we should concede the point by allowing the fossil fuel industry to wreck everything.

Will we wage and win the clean energy revolution that we know is possible?

Will we stand up to the entrenched, abusive power of the fossil fuel industry, which is also now the power of our federal government?

Will we protect our kids and all life from the gravest threat to their collective future? Or wallow in “uncertainty” about our own human agency…that is, capitulate?

Conflating these questions with scientific uncertainty may or may not be conscious abuse, pre-meditated evil. I’m sure the perpetrators have some other story so they can sleep at night. But it’s late for idle musing about their motives. We are now face to face with the one remaining uncertainty that matters: the fateful question of our own resolve.

There’s a raw, unforgiving beauty in this “uncertainty”: it’s ours to clear up.