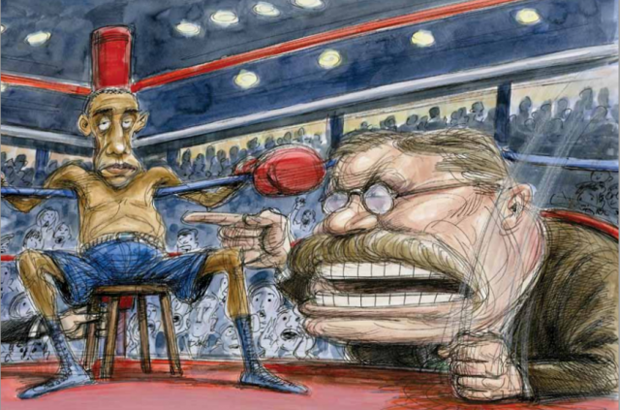 “Teddy Roosevelt loved to be in the middle of a fight. Not every President does. It’s partly a temperamental thing.”
- Presidential historian Doris Kearns Goodwin

In his interview with Thomas Friedman in the final episode of Years of Living Dangerously, President Obama is pensive — reasonable to the point of distraction:

“Science is science,….Over the course of the next several decades, we’re going to have to build a ramp from how we currently use energy to where we need to use energy.”

“…[W]e have to use this time wisely, so that you have a tapering off of fossil fuels replaced by clean energy sources that are not releasing carbon.

“We have got to meet folks where they are… I don’t always lead with the climate change issue because if you right now are worried about whether you’ve got a job or if you can pay the bills, the first thing you want to hear is how do I meet the immediate problem? One of the hardest things in politics is getting a democracy to deal with something now where the payoff is long term or the price of inaction is decades away. What we’ve tried to do is continually find ways in which we can make progress.”

Friedman tries to goad the President: “Do you ever want to just go off on the climate deniers in Congress?”

But No Drama’s dander will not get up.

“Yeah, absolutely,” the president said with a laugh. “Look, it’s frustrating when the science is in front of us. … We can argue about how. But let’s not argue about what’s going on…”

He sides with the truth, but there is little sense of consequence for being on the other side.

“The most important thing is to guard against cynicism.  I want to make sure that everybody who’s been watching this program or listening to this interview doesn’t start concluding that, well, we’re all doomed, there’s nothing we can do about it. There’s a lot we can do about it. It’s not going to happen as fast or as smoothly or as elegantly as we like, but, if we are persistent, we will make progress.”

Cynicism may well be the greatest threat, and opponents of climate action are busy feeding it. If it takes a national culture of futility and lack of faith in democratic institutions to keep us strung out on fossil fuels, well, business is business.

This is where we need a president to show, not tell. We have just watched a documentary that graphically depicts the devastating physical and human consequences of climate disruption, including the looming displacement of tens of millions of people in Bangladesh. The President is right to worry that we might be feeling somewhat discouraged about the prospects at this moment. But what does he offer to rally us?

“There’s a lot we can do about it”? “If we are persistent, we will make progress”?

Where’s the heat? Where’s the finger in the sternum of the opposition? Where’s the determination to overcome (or at least name) what’s really standing between us and solutions – the concentrated economic and political power of the fossil fuel industry? Where’s the bigness? Where’s the fight?

“When push comes to shove, we respond.”

How much further does push have to go before it encounters shove? How much more climate catastrophe do we have to bear? How much more aggressively do the fossil fuel industries have to pollute our democracy, attack reason, and undermine solutions?

And how can we ward off cynicism without a muscular, inspiring, aggressive national response – something big and bold to believe in and a president who will fight for it?

Here’s to showing more of what that might look like in the second season of Years of Living Dangerously ….and in the second half of the President’s second term.

Re. presidential leadership and the big bold national mobilization for climate solutions we need, this Robert Kuttner essay in American Prospect is worth a read:

The Hidden History of Prosperity